Media's future is still up in the air, and big media players like Comcast and NewsCorp. are competing to make the right bets. AOL has made the most investments.

The media industry has been one of the principal sectors disrupted by tech, as digital content and social networks completely transformed the cost and distribution models underlying the media business.

This ongoing phenomenon has understandably made large media companies nervous, and helped them to become more active acquirers and investors. Whether through their own venture arms or from the corporate parent company, they have been purchasing companies or have funded them, as they try to stay abreast of the changes. 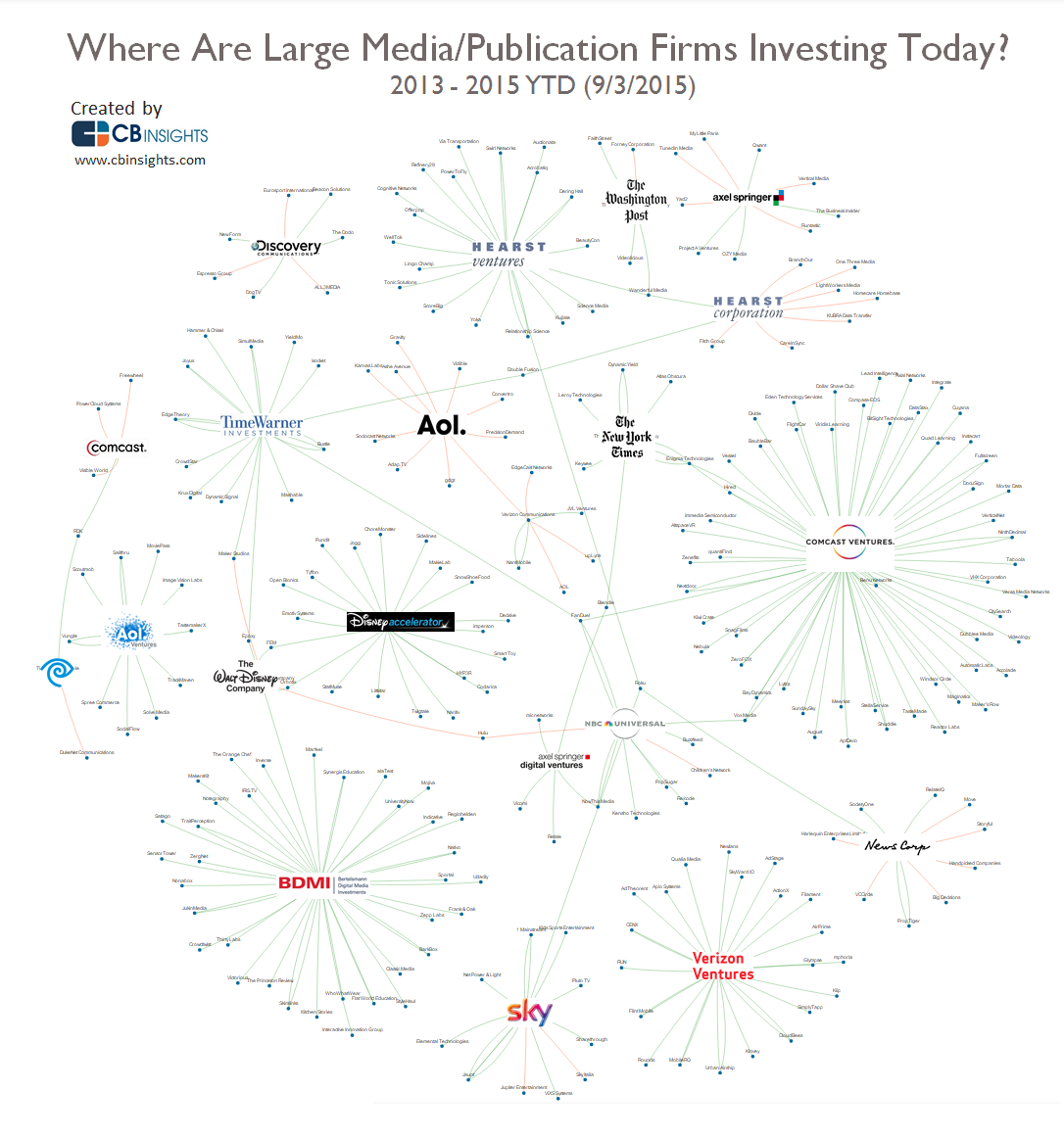 Some interesting data points emerge when we look at the visualization above, created with CB Insights’ Business Social Graph, which shows how top investors and target companies in any industry are interrelated. (Blue lines are investments, while red lines are acquisitions.)

1. Disney, The New York Times, and Axel Springer (and others) have created accelerators for media and entertainment companies. Disney has followed up with additional funding for two of these companies, including Sphero, the spherical robot company that is featured in the new Star Wars movie, “The Force Awakens” and is on sale at retail stores. The New York Times has also made significant investments through its accelerator, TimeSpace, such as funding unicorn Automattic and micropayments-startup Blendle. Axel Springer’s Plug and Play Accelerator has had seven batches so far. Comcast has teamed up with several accelerators to provide resources (DreamIt, Boomtown, etc.). Media companies are trying to find ways to identify budding companies early, in order to invest in them or strike up partnerships, and these accelerators have given them a pipeline of startups for possible follow-ons.

2. Most of these companies seem to be trying to find some way to connect with younger audiences, by investing in companies attuned to their media habits. Examples include:

3. A handful of these media giants are also investing in companies that aggregate social media analytics to profile and target specific audiences, including Keywee and TrackMaven.

4. A few investments have also been made into the virtual reality space: Comcast invested in AltspaceVR‘s Series A. Sky has participated in all of Jaunt’s rounds.

In general, the activity of large media increased steadily between 2010 and 2014. Last year saw a multi-year high of more than 120 investments and acquisitions, though 2015 has slowed slightly. AOL has made the most acquisitions during this time, with more than 20 since 2010. 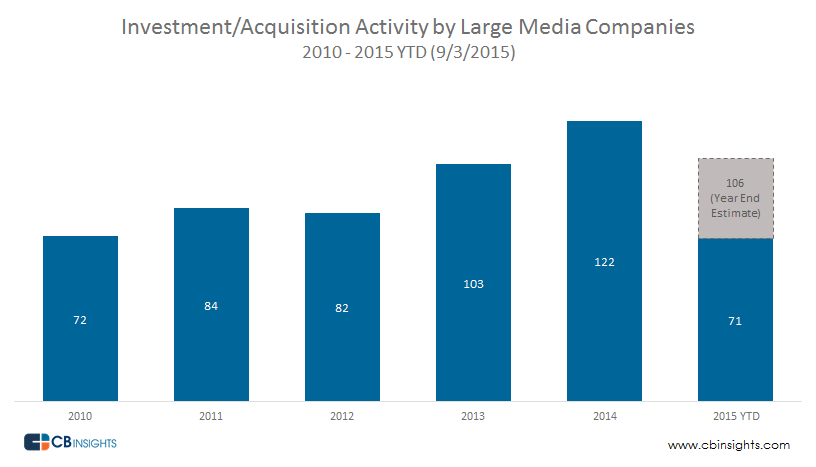 Below is a look at the same Business Social Graph shown above, but zeroing in only on corporate venture capital arms (as opposed to investments made directly out of the parent corporation): 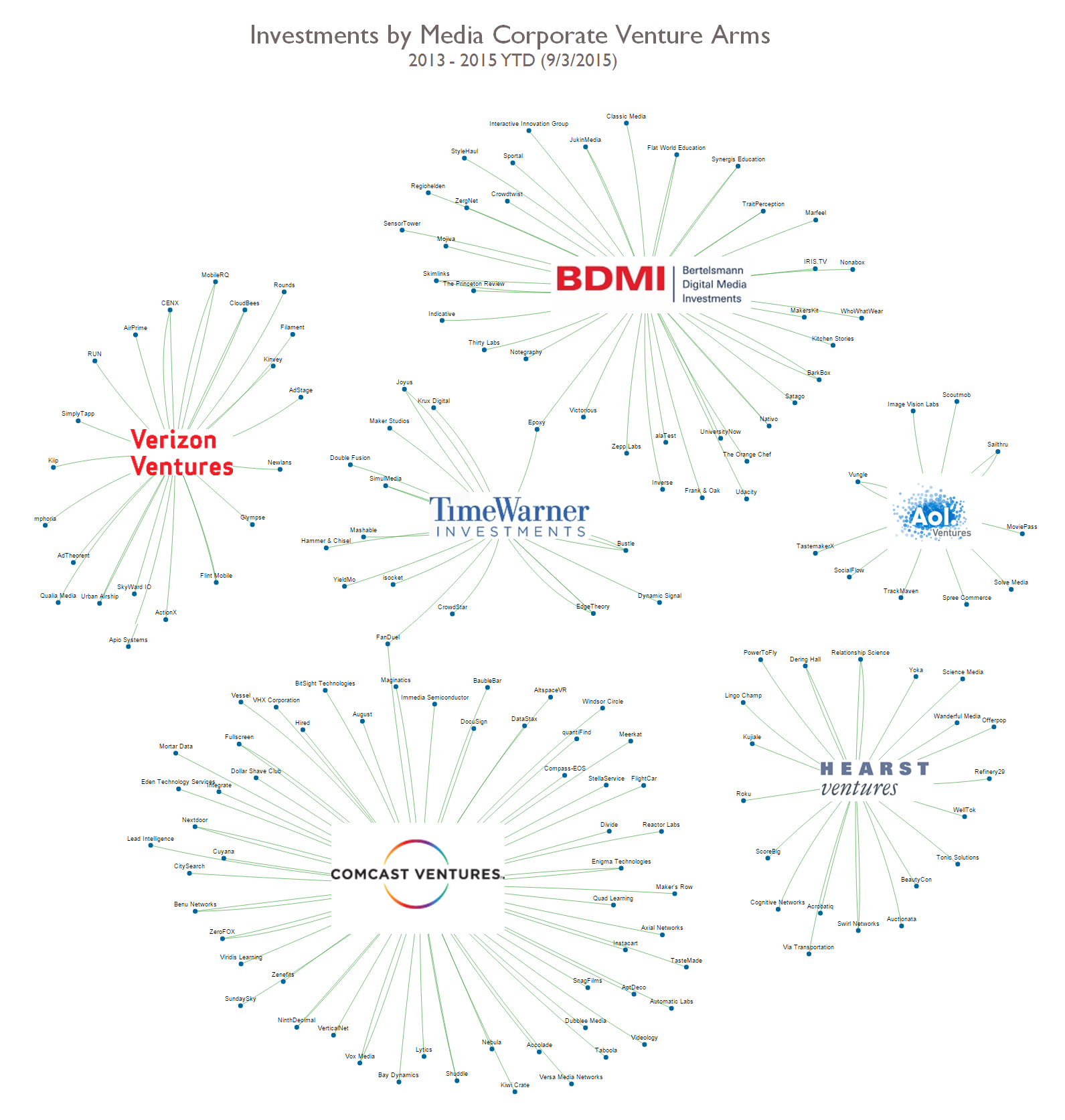 When we drill down into the media companies’ established corporate venture arms, we spot clear differences in terms of the investment strategies that distinguish these vehicles:

1. Some media CVC arms are media-focused while a few are eclectic. While the corporate venture capital  arms of AOL, Bertelsmann, Verizon, and Time Warner all tend to invest in companies related to their core areas of focus (content production, distribution, analytics, monetization, etc.), Comcast and Hearst seem to invest in high growth companies regardless of sector:

2. There have only been 2 deals with multiple media corporate VCs involved, one into Fanduel and the other into Epoxy.The big media CVC tendency to invest according to idiosyncratic theses is illustrated by the relative lack of overlap in their investments.

Want more information on media companies? Check out our venture capital database below.