Tiger Global Management has the highest number of unicorn portfolio companies, while SV Angel has made the most early-stage investments in $1B+ companies.

There are 344 private unicorn companies globally valued at $1B+ as of 5/5/2019 — all featured on CB Insights’ real-time global unicorn tracker.

Using CB Insights data, we looked into which investors have backed the most unicorns — and which are in the best position to see big returns, should these companies manage to exit at the valuations they’re getting in the private markets.

Note: We’ve done our unicorn hunters analysis 3 times before: July 2015, October 2016, and February 2017. Those results are included in the appendix at the bottom of this post.

It is closely followed by China-based Tencent Holdings, with 40 unicorns, and Japan-based SoftBank Group, with 38. 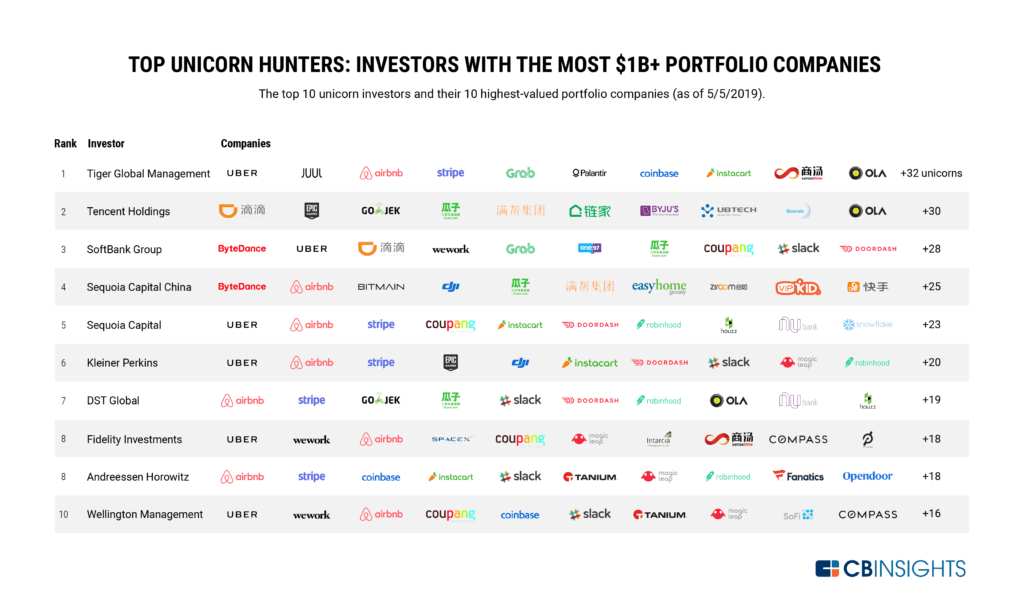 A number of highly valued unicorns have received funding from multiple top 10 investors.

SoftBank’s unicorn portfolio companies have the highest cumulative valuation, with 38 unicorns worth a collective $389B.

Tiger Global Management comes in second ($269B), while Fidelity Investments comes in third ($231B).

Of the top 10 unicorn investors, Andreessen Horowitz’s unicorns have the lowest cumulative investment total, at $134B — roughly one-third of SoftBank’s figures. 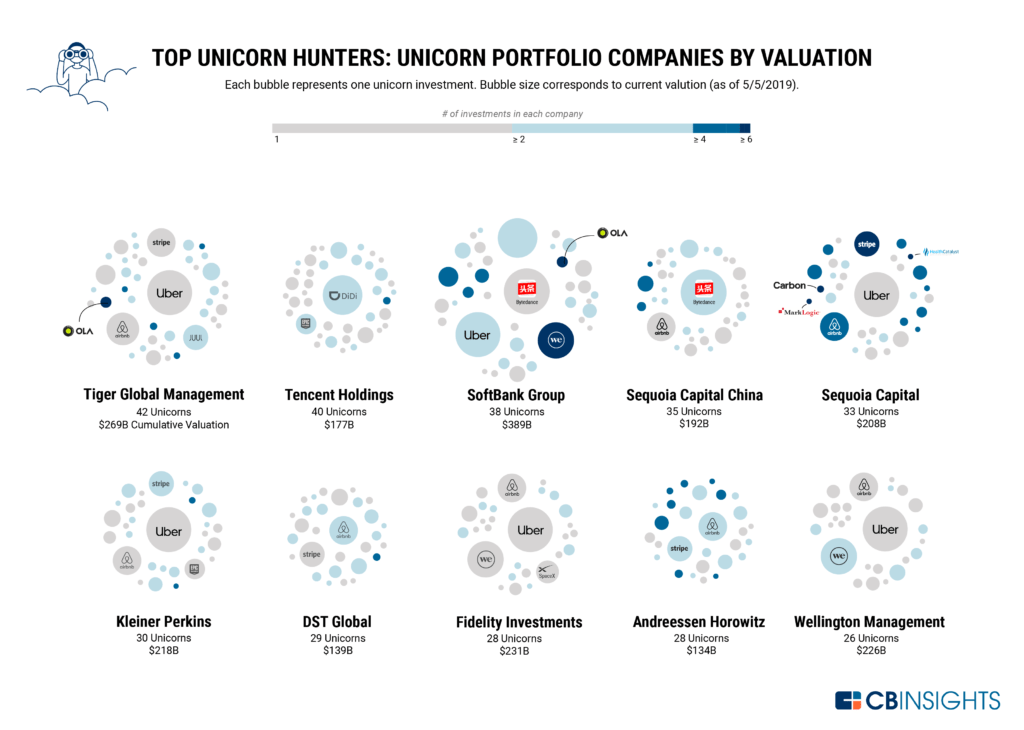 Investors that back these companies in early funding rounds stand to gain more from their exits. We evaluated which firms invested in the most unicorns at the seed and Series A rounds.

SV Angel has retained its #1 spot since our last analysis in February 2017, while Sequoia Capital has slipped in rankings from second to fourth place. Y Combinator and Sequoia Capital China round out the top 3 early-stage investors. 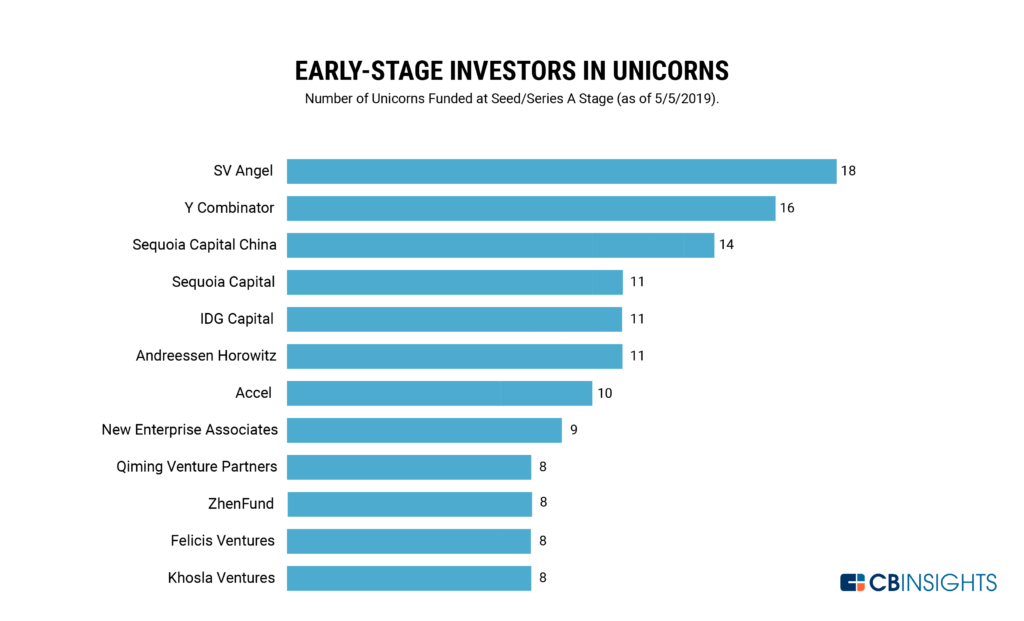 One way to measure a firm’s relative investment prowess is to look at the proportion of total unicorn investments to the number of those investments made at the early-stage. (In other words, how often a firm is getting in on the ground floor.)

Below is a complete list of the top investors in unicorn companies and the number of unicorn portfolio companies that they invested in at the early stages. 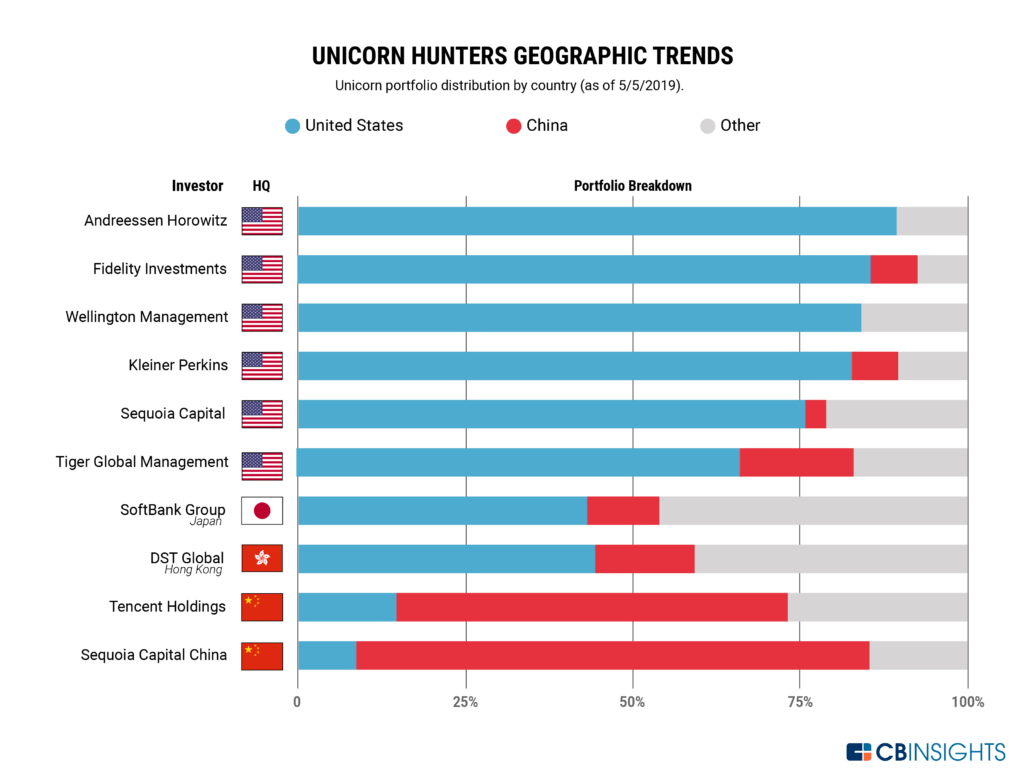 Sequoia Capital China has backed the most number of Chinese unicorns (27), representing 29% of all China-based unicorns.

SoftBank has backed the most unicorns (18) that are based outside of the United States and China.