Silicon Valley stalwart Benchmark has added Jasper Technologies to its tally of $1B+ exited investments. Benchmark also was early to invest in unicorns such as Uber, Snapchat, and Docker.

Prominent Silicon Valley venture capital firm Benchmark recently announced the addition of former Behance CEO Scott Belsky as its sixth general partner. Benchmark follows a unique model in which all partners have an equal stake in the firm’s success. Based on the data, the formula seems to be working.

We’ll discuss trends and highlights in Benchmark’s portfolio over the past few years by analyzing the following dimensions:

Benchmark slowed down their investment activity in 2015 year-over-year compared to 2014. The firm’s investment pace has been steadily declining, with the firm participating in under 30 deals in 2015 compared to at leat 35 deals in 2014.

Despite the slowdown, Benchmark had some recent notable investments, a few of which are included below:

Benchmark continuously finds itself invested in top exits. Since 2013, they have been involved in 7 IPOs, including those of Zendesk, Hortonworks, and New Relic. Additionally, Benchmark has had 4 mega-exits ($1B+) since 2013, including the IPOs of Twitter and GrubHub Seamless, with the acquisition of Jasper Technologies adding to their list of mega-exits as of February 2016. The data highlighted below details some of Benchmarks high-profile exits from the last 14 months.

Its worth noting that Benchmark has a strong unexited portfolio and is an early investor in various unicorns as well. You can see a visual of some other top VC “unicorn hunters” here.

Benchmark has a small team of GPs with a unique structure, as previously mentioned. Here are a couple of the notable folks:

Matt Cohler joined Benchmark in 2008, after working previously at Facebook and LinkedIn. As one of Facebook’s first employees, Cohler was an integral part of Instagram’s sale to Facebook in 2012. His interest in consumer internet companies is on display via his investments which include Tinder, Quora, Asana, Dropbox, Edmodo, and 1stdibs. Cohler also sits on the boards for companies like Xapo, Greenhouse, and Domo.

Peter Fenton joined Benchmark in 2006 after spending seven years as a partner with Accel Partners, where his investment interests included software, digital media, and technology enabled services. He currently sits on the boards for companies such as Docker, Quip, Optimizely, and Cockroach Labs. The following table shows other investors with whom Fenton shares boards, taken from his profile on CB Insights.

Mitch Lasky has spent more than two decades in the mobile gaming, new media, and interactive entertainment business. Prior to joining Benchmark in 2007, he served as executive vice president of mobile and online at Electronic Arts. Earlier in his career, he practiced law, worked at the Walt Disney Company, and started a multiplayer online game company. Lasky currently sits on the boards of Snapchat, Cyanogen, Engine Yard, and PlayFab.

Bill Gurley joined Benchmark Capital in 1999 after spending two years as a partner with Hummer Winblad Venture Partners. Before entering the venture capital business, he spent four years on Wall Street as a research analyst. Gurley sits on the boards for Uber, Nextdoor, Stitch Fix, and Vessel, among others.

The industry heatmaps below show the changes between these two time periods. The size of the box represents the number of deals and the darkness of the blue represents total funding amount.

Diving into the industries within mobile & telecom, Benchmark has slightly shifted away from telecom services and focused more on mobile software & services. Within the latter industry, the firm has recently funded Quip, Amplitude, and Cyanogen.

Benchmark continues to invest in the internet software space with recent investments in Optimizely, Greenhouse, and CloudPassage

Benchmark primarily focuses their investments domestically with the bulk of their activity going to US-based companies. Within the US, although Benchmark still overwhelmingly invests in California-based companies, New York is an area Benchmark looks in for opportunities. WeWork and Farmigo are some of the New York-based companies they have placed bets on recently.

Perhaps the most surprising state receiving investment was Utah, which counts Domo and DAZ 3D as Benchmark portfolio companies.

The geography heatmaps below, taken from Benchmark’s profile on CB Insights, illustrate the firm’s increased interest in New York and Michigan. The size of the box represents the number of deals and the darkness of the blue represents total funding amount.

Benchmark has maintained a relatively balanced portfolio in terms of stage, with deals skewed a bit more towards Series A and B stages. Series C, D, and E+ stage companies account for 50% of deals while just Series A and B deals receive the the other 50% split evenly as seen below.

Benchmark’s investment pace is more measured than many other Valley firms and so the firm’s follow-on rate is quite high as it leans into its winners.

In fact, Benchmark’s Q4’15 investments were 100% follow-on financings with bets placed on One Medical Group, Quip, and Optimizely. Meanwhile, Q3’15 had several new deals such as investments in Bugsnag, Outpost Games, and Amplitude.

The following graph, taken from CBI’s Investor Analytics, illustrates the ratio of new and follow-on investments for each quarter for the past five years. 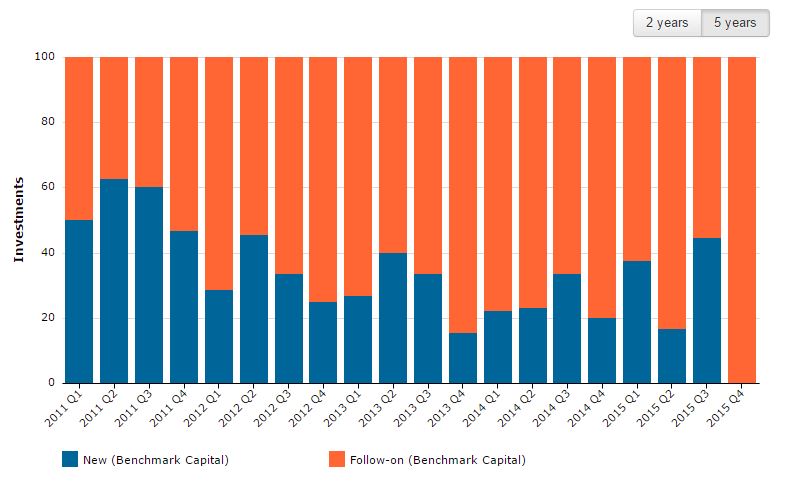 The graph below illustrates the trends in Benchmark’s average and median deal size for each quarter. 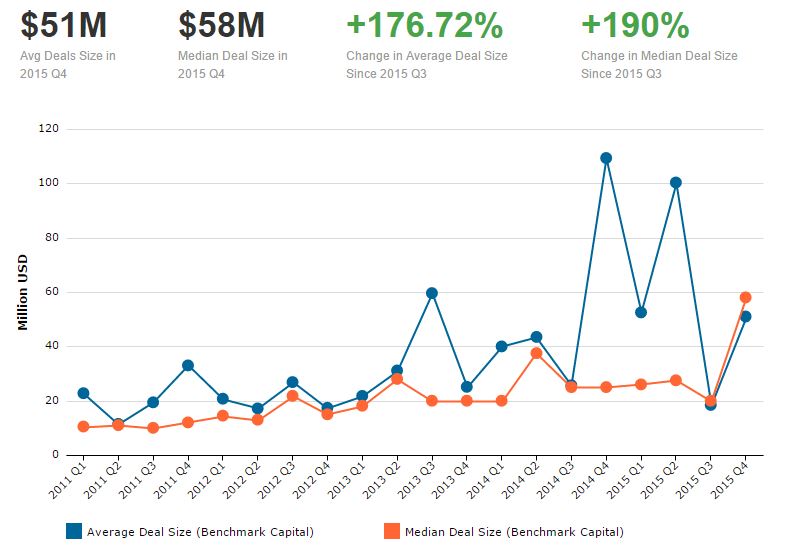 Benchmark Capital’s top syndicate partner in deals is DAG Ventures, a “coattail” fund, which has figured out that Benchmark is a good fund to co-invest with. The two firms have invested together in 41 companies across 80 rounds making DAG the largest co-investor by a wide margin.

The tables below show the investors that Benchmark often invests after or with, taken from Investor Analytics on CB Insights. 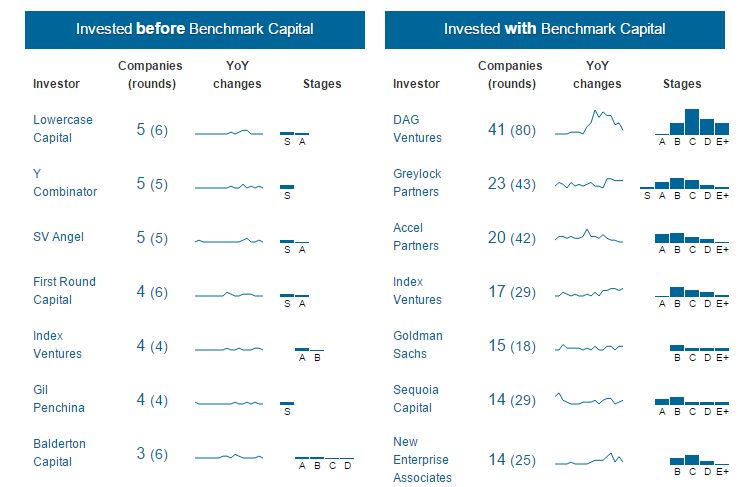