With 74 deals this year-to-date, beauty startups may have the momentum to hit a record annual deal high in 2016. The category has recently garnered attention from corporates and VCs; this year alone, Sephora launched a beauty accelerator program, L’Oreal announced a partnership with Founders Factory to invest in beauty tech startups, and 500 Startups created a beauty startup track.

As the industry diversifies, many beauty startups are experimenting with innovative design and distribution methods, leveraging subscription boxes (think Ipsy and Birchbox), easy sampling options (like Scentbird), on-demand services (such as GlamSquad), organic or niche ingredients (Juice Beauty), and personalization (Function of Beauty).

Our beauty category includes brands producing and selling makeup, hair care, and skincare products; e-commerce platforms focused solely on beauty and cosmetics; and beauty services such as spas or on-demand hair styling. It does not include broad e-commerce platforms that happen to sell beauty products or medical services.

Funding rounds to beauty companies have increased every year since 2012, and this year is no exception; the sector already attracted as many deals in the first eight months of 2016 as it saw in all of 2013. The overall CPG sector (which overlaps with makeup and skin care brands) is growing too, but beauty’s increase is more dramatic.

However, funding dollars have fallen since their peak of $635M in 2014. 2014’s total was inflated by Beijing-based beauty e-commerce platform Jumei International Holdings‘ $150M private equity round. Without that one deal, funding would have peaked in 2015 instead at $488M, still above 2016’s projected total funding.

So far this year, Soothe, an at-home on-demand massage service, raised the biggest round yet with a $35M Series B. If we continue to see only smaller-scale deals in the last few months of 2016, funding may come in below 2015’s levels despite the uptick in deals. 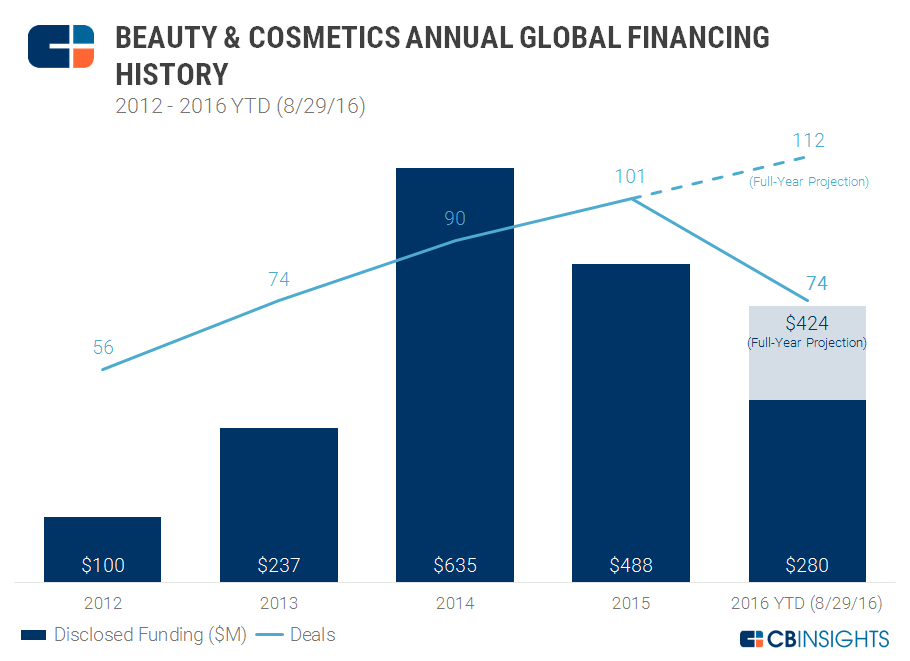 Beauty deals dropped to 21 in Q2’16 from 37 the prior quarter, and dollar funding fell to $53M from $120M. Deal count saw its five-year high of 38 in Q3’15, while dollars were highest at $299M in Q2’14 (the quarter when Jumei International Holdings‘ raised its previously mentioned $150M private equity round). 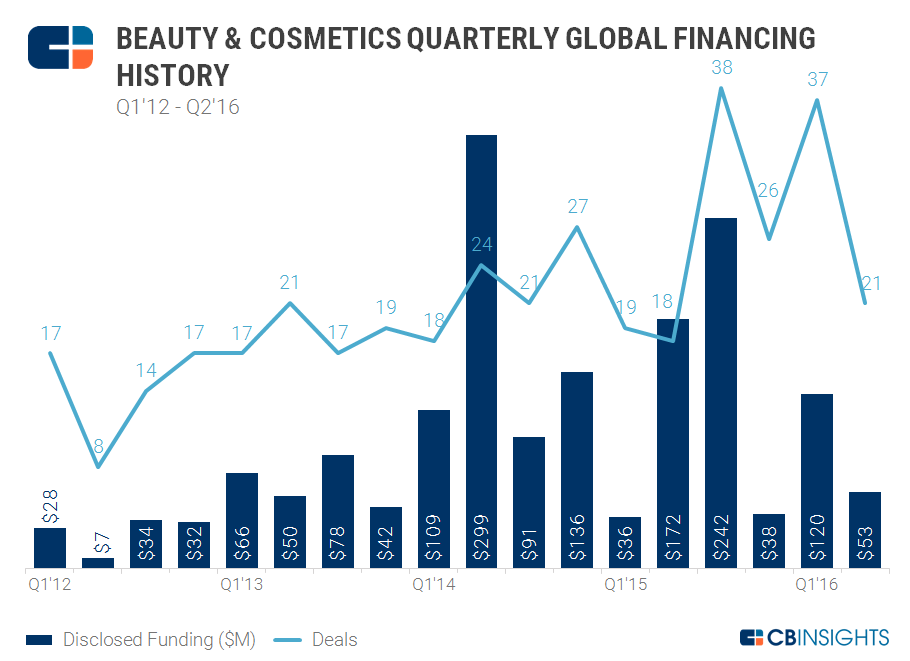 A relatively high proportion of beauty deals have been at the “Other” stage, which includes corporate minority and unattributed rounds. Seed/angel deals also capture a high share — as is typical across most sectors — while Series A deals have represented between 13% to 16% of deals each year. Later-stage deals represent a notably low proportion of the total. 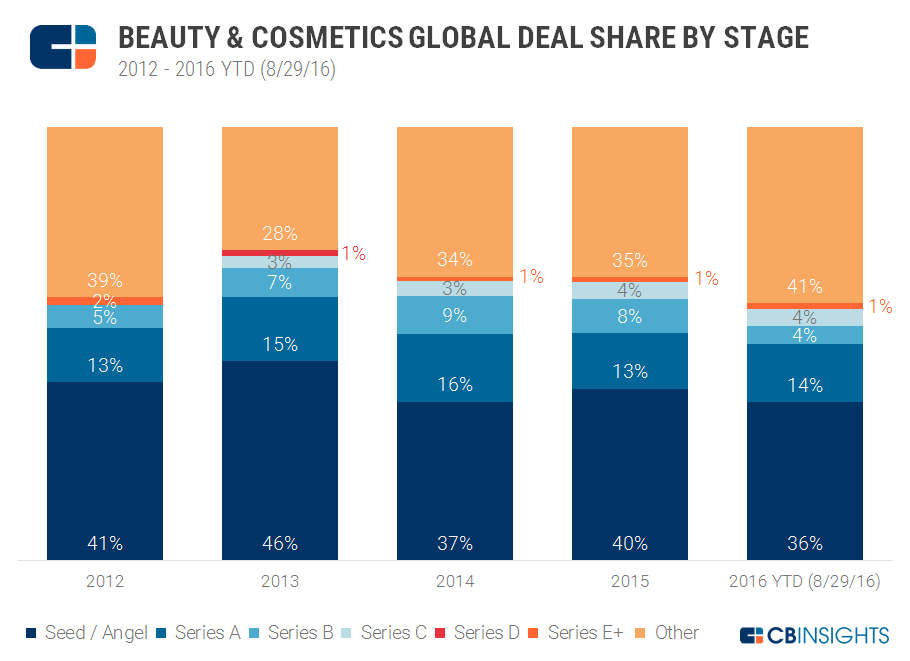 TRIA Beauty, a laser hair-removal device company, is the US’s most well-funded beauty company with $154M in equity funding (they also raised over $53M through debt). In second is Ipsy, with $103M, followed by Memebox (which focuses on Korean products but is California-based) with $96M, and Birchbox with $87M. 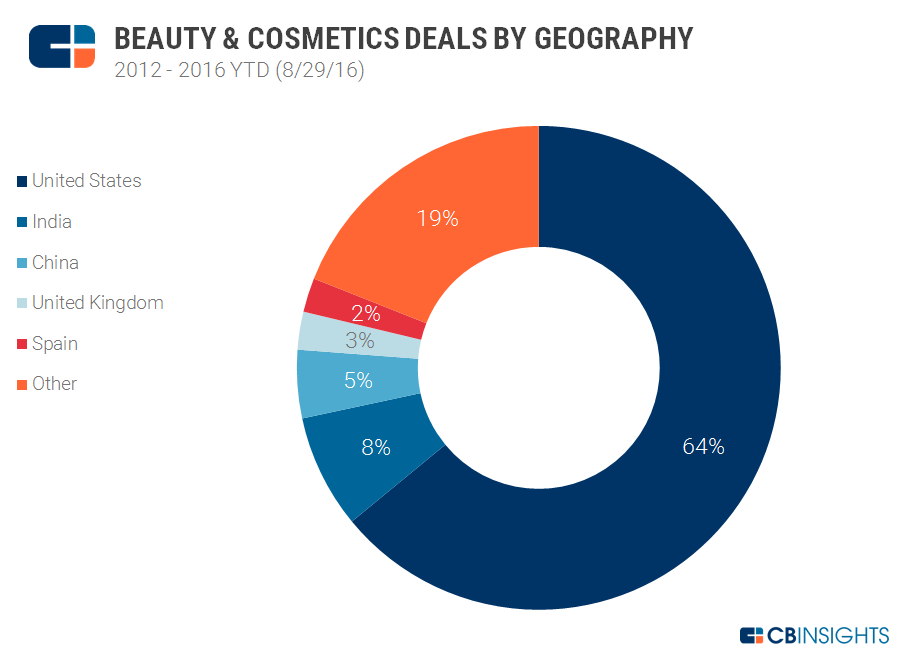 Want more data on CPG and beauty financing trends? Login to CB Insights or sign up for free below.