The beauty category remains an important sector for investors, highlighted by Unilever’s recent acquisition of hair care startup Living Proof on Dec. 16. Living Proof previously raised $62M in disclosed funding from Leerink Partners, Polaris Partners, Jennifer Anniston, and others, and was most recently valued at $163M during its Series C in 2013.

Living Proof aims to use scientific methods to improve hair care, and according to our data, holds over 40 patents. The recent exit by the company highlights the new business models beauty and cosmetics startups are developing, which has, in turn, made these companies attractive targets for investors.

While quarterly deals to beauty and cosmetics startups peaked in the first quarter of 2016, the sector is still on track to reach a record high deal count in 2016. Based on a slowdown in Q2’16 and Q4’16, deal count is poised to come in just slightly above last year’s total.

However, funding dollars peaked in 2014, with $640M poured into the sector that year. The 2014 total was boosted by a $150M private equity investment by General Atlantic in Jumei International Holdings, a Beijing-based e-commerce platform for beauty products. This was the largest beauty equity investment deal since 2012. In 2014, Birchbox also raised a $60M Series B, and rounding out the top three deals that year, Chinese discount retailer Vipshop made a $56M corporate minority investment into Ovation Entertainment, a Chinese branded cosmetics producer.

In 2015, subscription beauty startup Ipsy raised a $100M Series B from Sherpa Capital and TPG Growth, in one of the largest beauty investment deals with VC participation since 2012. The deal boosted Ipsy’s total funding to $103M and valued the company at $800M. Shanghai-based e-commerce beauty site Lili & Beauty tied for 2015’s largest deal with a $100M Series B. 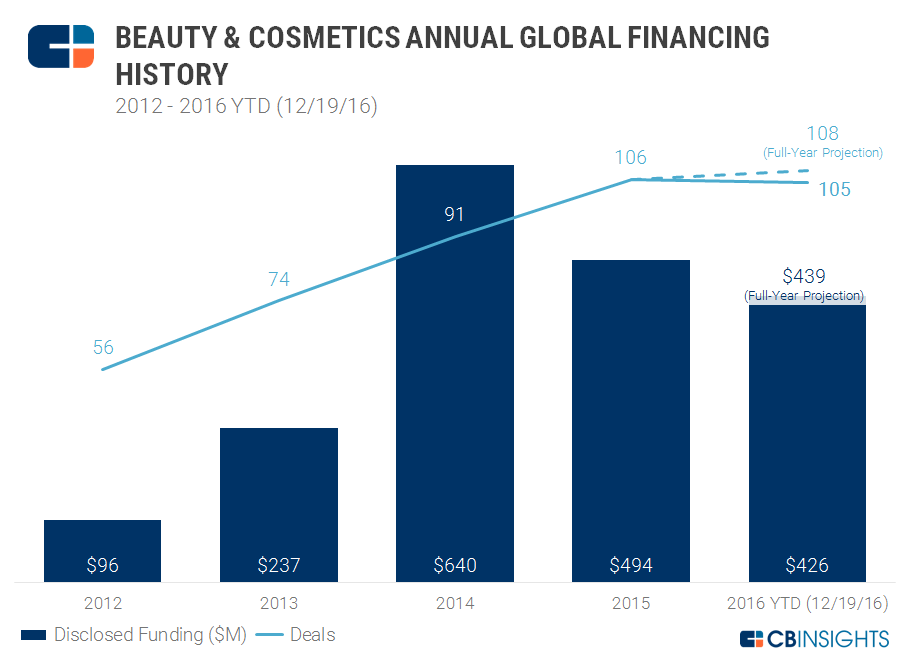 Memebox represented roughly half of all Q3’16 beauty funding, with its $66M Series C. (In Q4, Memebox continued its Series C with another $60M raise). The second largest deal of the quarter was a $12M Series D to Nykaa, an Indian cosmetics e-commerce platform.

Rounding out the top three deals was hair care startup Madison Reed, which raised $10M from Norwest Venture Partners, True Ventures, and First Round Capital. The investment was a follow-on to Madison Reed’s $16M Series C in 2015 raised at a $63M valuation. 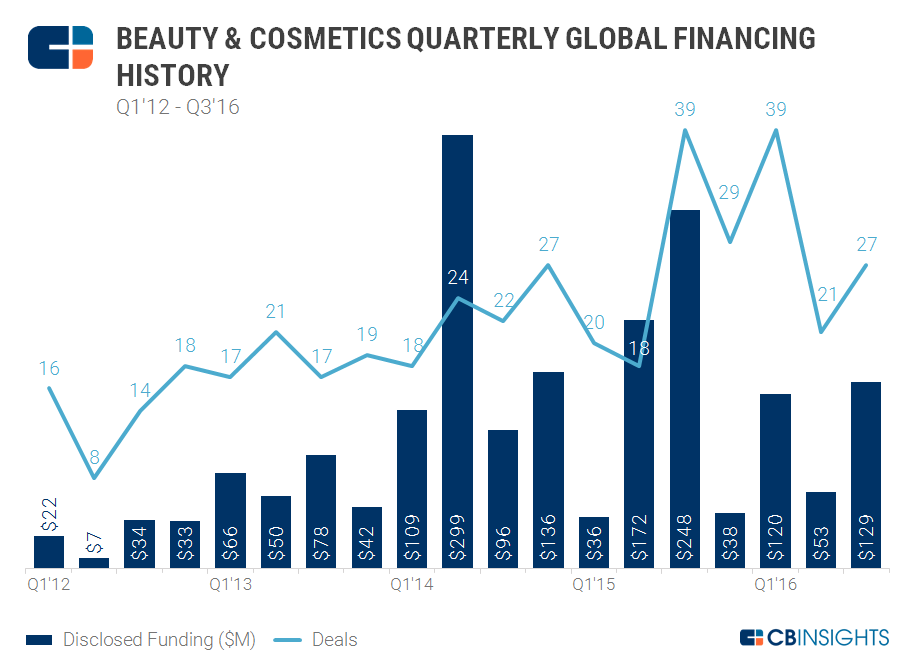 Want more data on beauty, cosmetics, and CPG startups? Log in to CB Insights or sign up for free below.