Research Brief
4046
Despite the slight bump in deals, funding has declined for the last two years.

Beauty and grooming companies attracted an all-time high of 112 equity funding deals throughout 2016, a slight bump above the prior record of 110 deals in 2015. However, annual funding dollars fell due in part to an absence of any $100M+ mega-rounds in 2016, compared to two such rounds the prior year.

Beauty and grooming startups hit a record high in deals in 2016 at 112, two more than they saw in 2015. Despite the growth in deal count, funding dollars have slid for two consecutive years, from a peak of $843M in 2014 to just $391M in 2016. 2014’s funding was inflated by the sector’s largest-ever equity deal — a $150M private equity investment by General Atlantic into Jumei International, a beauty e-commerce platform based in Beijing.

In 2016, Korean beauty startup Memebox raised $126M, though split over two rounds — the two largest deals of the year. The company, which has over $157M in disclosed funding to date, raised a $66M Series C in August, followed by an additional $60M in an extension of the round in December. Feelunique.com, a UK-based luxury beauty shopping site, raised the year’s third-largest deal with a $28M growth equity investment in Q2 from Palamon Capital Partners. 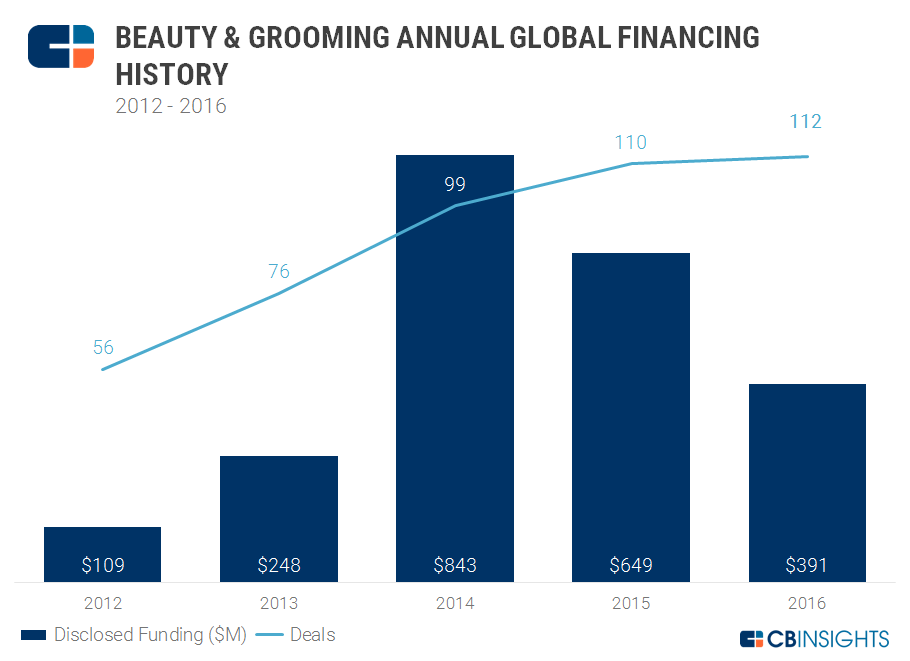 Beauty and grooming deals dropped in Q4’16 to 21 deals, from 31 the prior quarter. Funding fell slightly to $127M from $134M. Memebox led the quarter with a $60M Series C extension, with participation from Cowboy Ventures, Altos Ventures, and others.

Glossier, which offers a content-rich beauty e-commerce platform and its own branded makeup products, raised the second-largest deal with a $25M Series B, bringing total company funding to $35M. Glossier has been backed by smart money VC Index Ventures, as well as Forerunner Ventures, Lerer Hippeau Ventures, and others. Rounding out the quarter’s top three was Koco Life, the company behind the coconut-oil based beauty brand Kopari Beauty, with a $13.5M investment from undisclosed investors. Koco Life boasts a start-studded list of prior investors, including Ashton Kutcher, Hilary Duff, Mila Kunis, and Karlie Kloss. 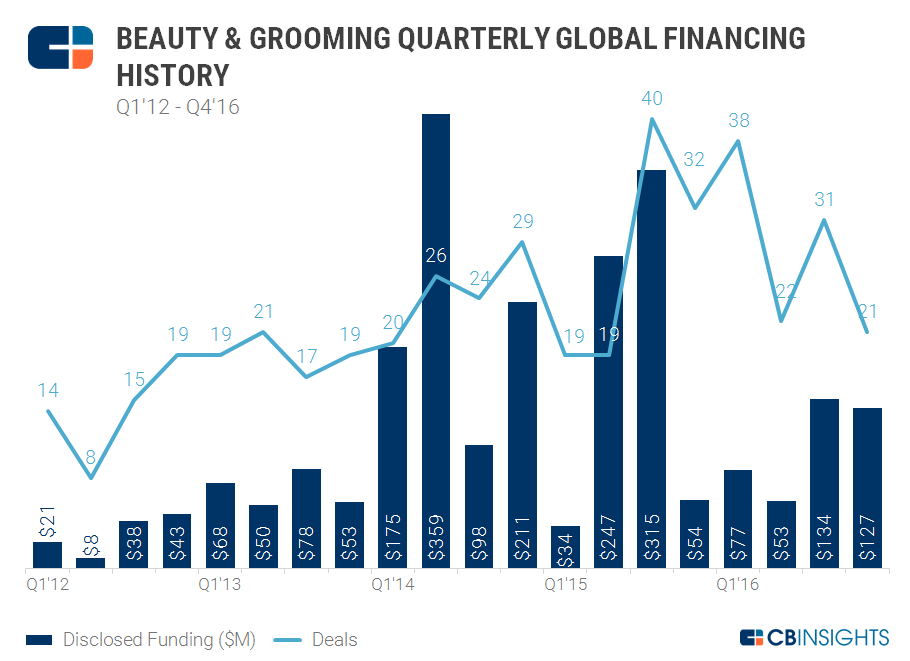 Want more data on cosmetics startups? Log in to CB Insights or sign up for free below.