Research Brief
1491
At the start of the year, Union Square Ventures took a look at 'Disaggregation of a Bank' startups. Three quarters later, those companies have raised hundreds of millions in VC funding.

Disaggregation of a Bank – There are lots of cool charts thrown around the startup/VC world. One of the… http://t.co/0qhgQsL5SK

Obviously, there are many more tech startups focused on these areas of big banks than Pease highlights, but nevertheless, we thought it would be interesting to use CB Insights data to crunch the numbers behind his original list of 31 bank busting startups.  They provide a snapshot into what is happening within the broader fin tech industry.

Over the last four quarters, the bank disaggregation startups raised $590M across 21 deals. Of note, startups on the list have raised $469M after Pease published his analysis on January 7. Each of the last four quarters have seen $100M+ invested, with Q2’14 seeing the highest amount driven by large rounds to lending firms Prosper Marketplace and Lending Club. 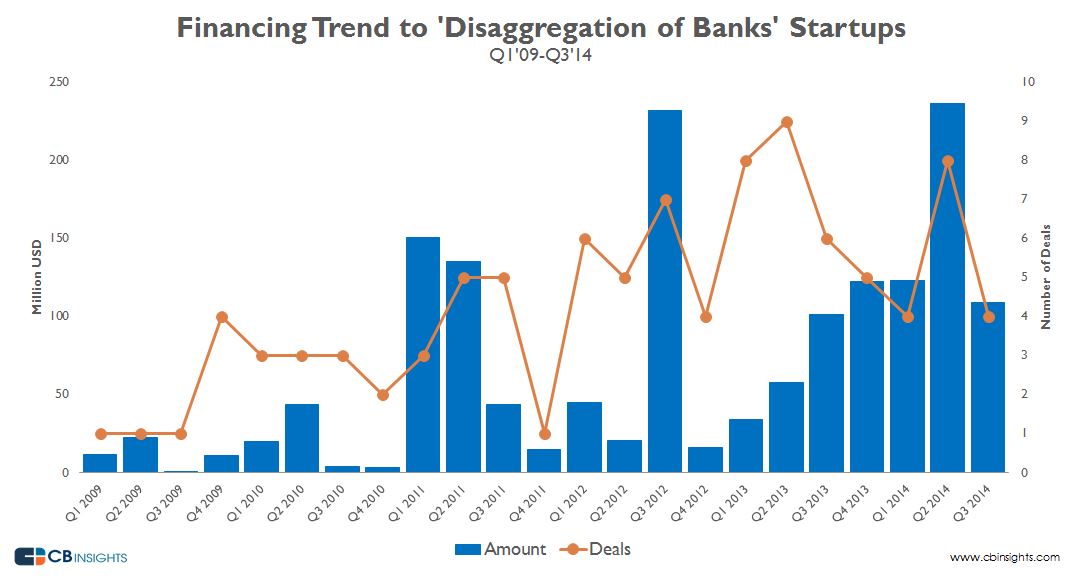 Over the last eight quarters, just over 51% of deal activity to these select startups came at the early-stage (seed/Series A). But YoY deal growth is clearly moving to the mid-stage as highlighted by the visualization below. Among the bank disaggregation startups that have raised mid-stage funding in the last year are Coinbase, Auxmoney, CircleUp and TransferWise, the UK-based money transfer startup rumored to be raising new funds from Sequoia Capital at a valuation near $1B.

Taking on banks requires capital (lots of it)

Perhaps not surprisingly, Union Square Ventures which is where Pease works, was invested in the highest number of companies (9) on the list including Coinbase, SigFig and Funding Circle. A list of VC investors, outside of USV, who have invested in four or more of the bank disaggregation companies since 2009 is below.