Baby and kids tech startups are seeing more and more deals, as they provide services from coding lessons for kids to rides home from school.

Funding to the baby and kids tech space is on pace to reach a record number of deals in 2017 as the sector continues to grow.

The space has seen an increasing proportion of early-stage deals over the years: early-stage deal share has grown steadily each year from 54% in 2014 to 61% in 2017, signaling that there may be an opportunity for smaller entrants in the space.

At the same time, there have also been large later-stage mega-deals taking place, such as a $200M Series D round of funding to China-based unicorn VIPKID, a language-learning platform for children, earlier this quarter.

Using CB Insights data, we dove into funding trends to the baby and kids tech sector and visualized where investors are placing bets across different categories within the space.

The infographic below visualizes all deals between 2013 – 2017 YTD (9/6/17) to startups featured in the CB Insights Baby and Kids Tech Market Map. The map highlights 85+ of the most well-funded VC-backed startups in the space that had raised capital in the last 24 months. 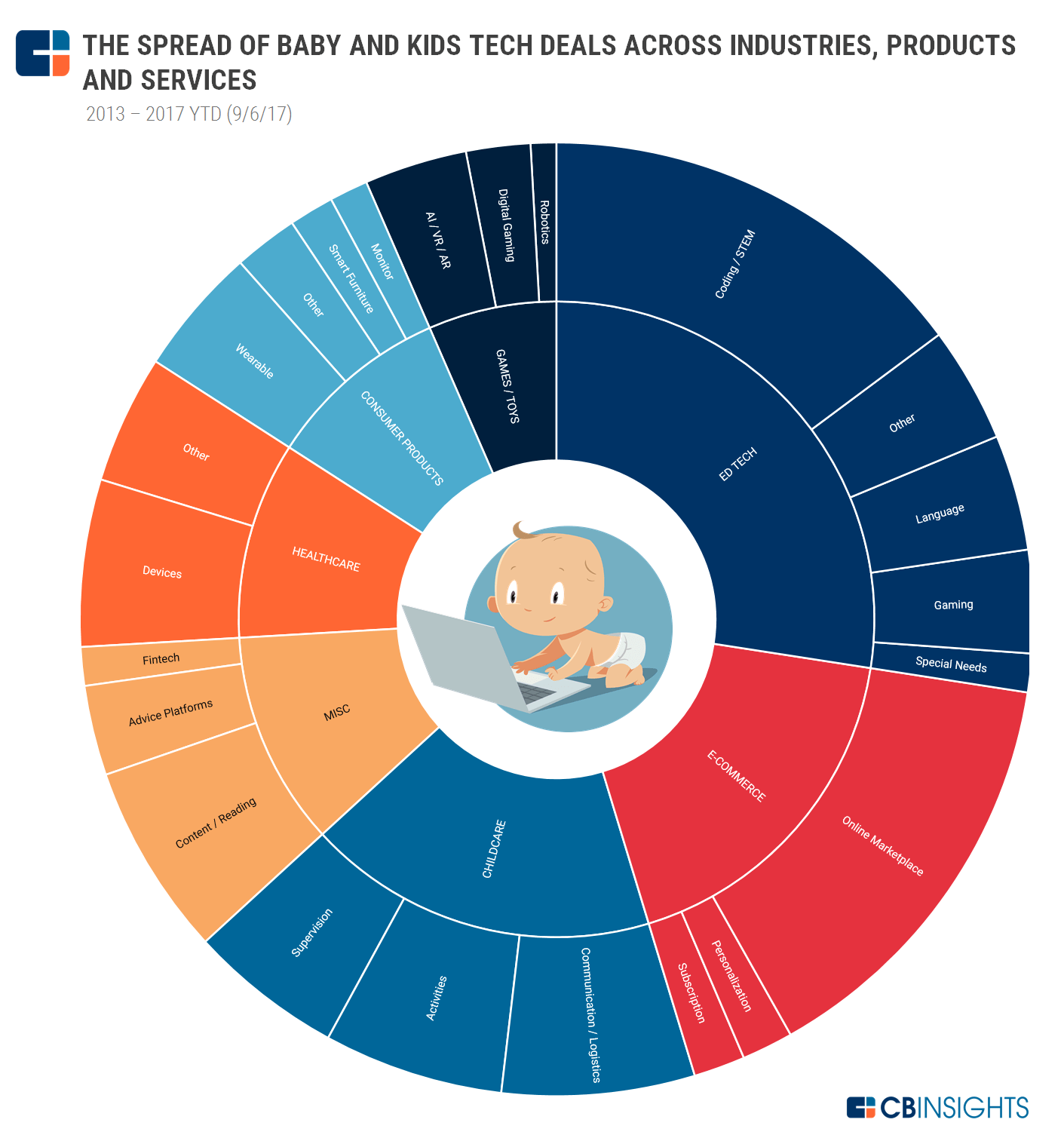 Startups are offering new technologies to improve the lives of babies, children, and their parents. Track and analyze this growing category yourself using our Baby and Kids Tech Collection.

The bulk of deals has gone to startups in the Coding / STEM (science, technology, engineering, and math) subsector within Ed Tech. This includes deals to well-known players such as electronic robot building startup littleBits (which has seen 3 deals since 2013 to reach $59.1M in total disclosed funding), as well as to smaller companies like KUBO, which teaches kids how to code using a robot (2 deals, together worth $1.1M).

Large online marketplace platforms take the majority of deal share within the e-commerce sector of baby and kids tech. Within this category, there are also early-stage deals to kid-centric e-commerce platforms like Mac & Mia and Rockets of Awesome, which use personalization as part of their business model. Startups like these often deliver a custom-curated selection of clothes based on a buyer’s unique preference, allowing buyers to return any items they don’t want to keep for free.

Under the Supervision subsector of Childcare, on-demand ride-hailing companies for kids make up a large portion of deals. While the “Uber for kids” business model has not always done well — as evidenced by the shutdown of Shuddle in 2016 — ride provider Zum raised a $5.5M Series A funding round from Sequoia Capital just last month.