The “last mile problem” has long been a thorn in the side of logistics providers, transportation companies, and retailers alike. Compared to the main legs of bulk shipping, train, truck, or aircraft transport, the final leg (or last mile) from logistics hubs to individual homes and offices has traditionally incurred the highest cost and complexity.

Last mile challenges have only grown as the proliferation of online shopping strains capacity. Infrastructure failings also complicate last-mile delivery in developing markets and disaster-stricken areas. With such a clear pain point, it’s no surprise that a number of tech startups are already helping to tackle these challenges.

Using the CB Insights Company Comparison Tool, we examined six early-stage (up to Series A) startups chasing something far more radical: the last mile delivery drone. Not listed but also noteworthy is Zipline, the Sequoia-backed, underserved-focused last mile solution serving Rwanda that has also planned blood and medicine deliveries to rural areas of the US. (The company has raised more than $47M in total funding, most recently a $25M Series B in November 2016.) 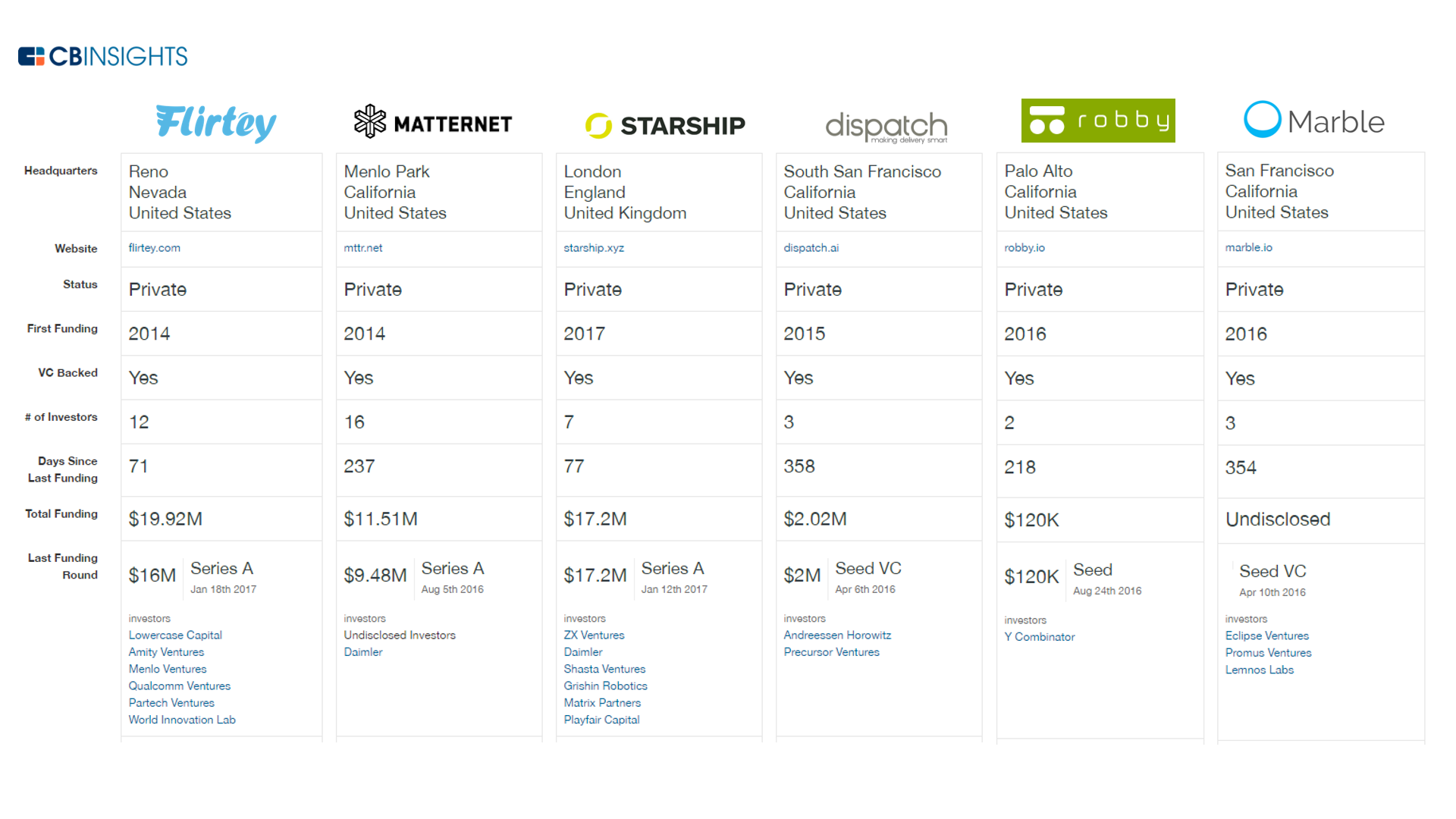 All of these startups are conceptually similar, building autonomous drones to drive down the cost and difficulty of last mile delivery. However, they are pursuing wholly different approaches in aerial (Flirtey and Matternet) versus ground-based solutions (Starship, Dispatch, Marble, and Robby). Aerial drones must contend with air-traffic regulation and safety concerns, while ground-based vehicles are more susceptible to vandalism and theft.

Following Amazon’s announcement of their Prime Air initiative in late 2013, Flirtey and Matternet took on the challenge of developing self-piloted aerial drones. Both startups have focused low-cost, light-payload UAVs meant to simplify small parcel deliveries as well as transport aid to rural areas and disaster zones.

The companies have been trading milestones; Flirtey teamed with 7-Eleven for the first FAA-sanctioned drone delivery to a US home in July 2016, and has also paired with Domino’s to deliver pizzas in New Zealand. Meanwhile, Matternet’s ONE has been trialing postal deliveries with Swiss Post since July 2015, and its new M2 can carry a 4.4-pound payload up to 12 miles.

Starship Technologies, Dispatch, Marble, and Robbie aim to build fleets of ground-based autonomous robots for last mile deliveries. Starship Technologies, created by Skype co-founders Ahti Heinla and Janus Friis, has aggressively pursued partners in food delivery with Just Eat and Domino’s in the UK and DoorDash and Postmates in the US.

We also used our Business Social Graph tool to find investor relationships in the space (each green line signifies one deal): 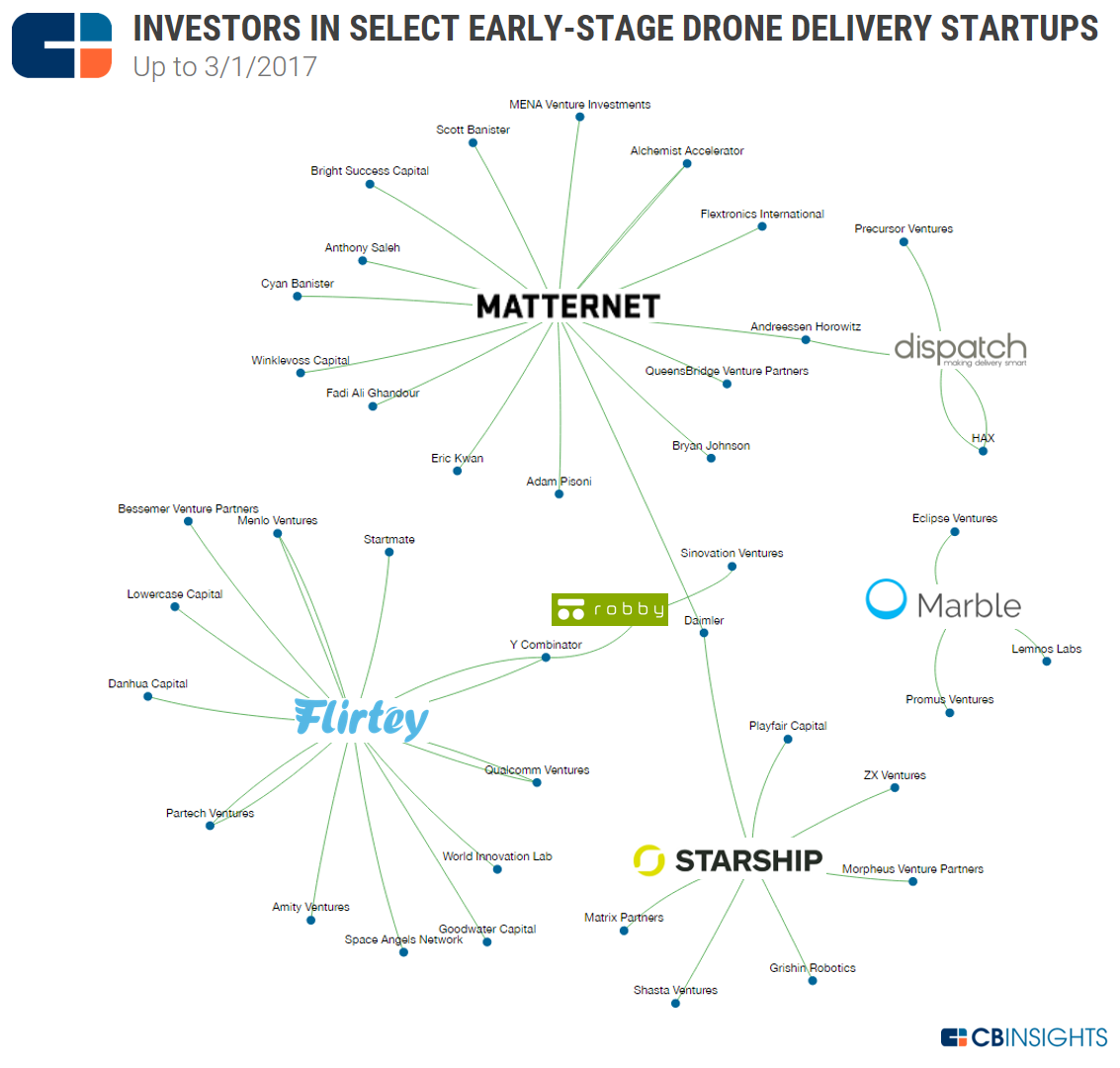 This cohort of companies, though early-stage, already sports a diverse range of investors. Andreessen Horowitz’s portfolio includes bets on both ground-based and aerial drones (Dispatch and Matternet), while Y Combinator has backed both Robby’s ground robots and Flirtey’s flying drones. Newer hardware-focused outfits are participating, with accelerators and investors like HAX (Dispatch) and Lemnos Labs (Marble).

Corporations besides Amazon are also seeing opportunities in this space. In August 2016, Daimler announced an investment in Matternet alongside an initiative to develop electric, networked delivery vans. It unveiled van concepts that would serve as “mothership” hubs for either Matternet or Starship drones, automating loading and compensating for the robots’ relatively limited range. The company deepened its foray into the space in January 2017, taking a minority stake in Starship. Beyond startup investment, AT&T, Qualcomm, and others are also looking to tap into the infrastructure and communications needs of this nascent market.

Looking for more data on private companies in delivery and logistics? Sign up for the CB Insights tech market intelligence platform for free below.