Autonomous driving development has been a significant challenge for major players in the mobility space.

Building and training driverless vehicles requires significant up-front investment, and the technology has yet to yield a profit.

In response, automakers are increasingly looking at partnership opportunities to pool resources and minimize the financial burden associated with autonomous vehicle (AV) development.

In addition to partnering with each other, automakers are teaming up with Tier 1 suppliers and full-stack AV developers. AV developers are especially eager to work with auto incumbents, as automakers and suppliers have the manufacturing expertise and capabilities to scale that can help these companies commercialize their technology. 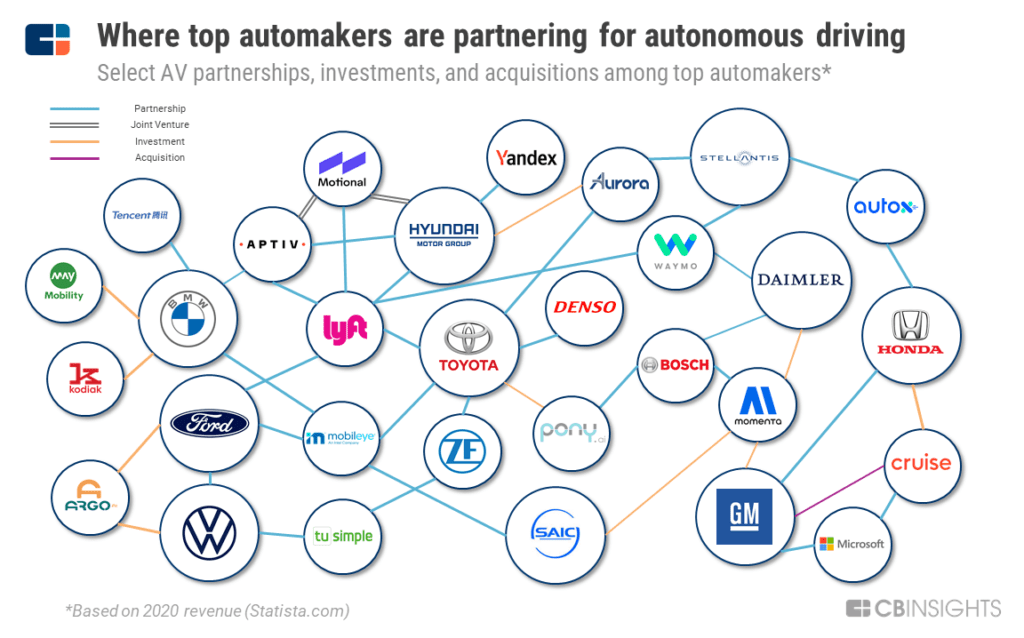 We exclude companies working on specific components of autonomous driving such as perception, mapping, and simulation. We also exclude partnerships for Baidu from the graphic given its vast number of partnerships, which are discussed later in this brief.

Legacy Tier 1 suppliers are rapidly partnering with new autonomous driving companies to provide solutions for the future of autonomous vehicles. 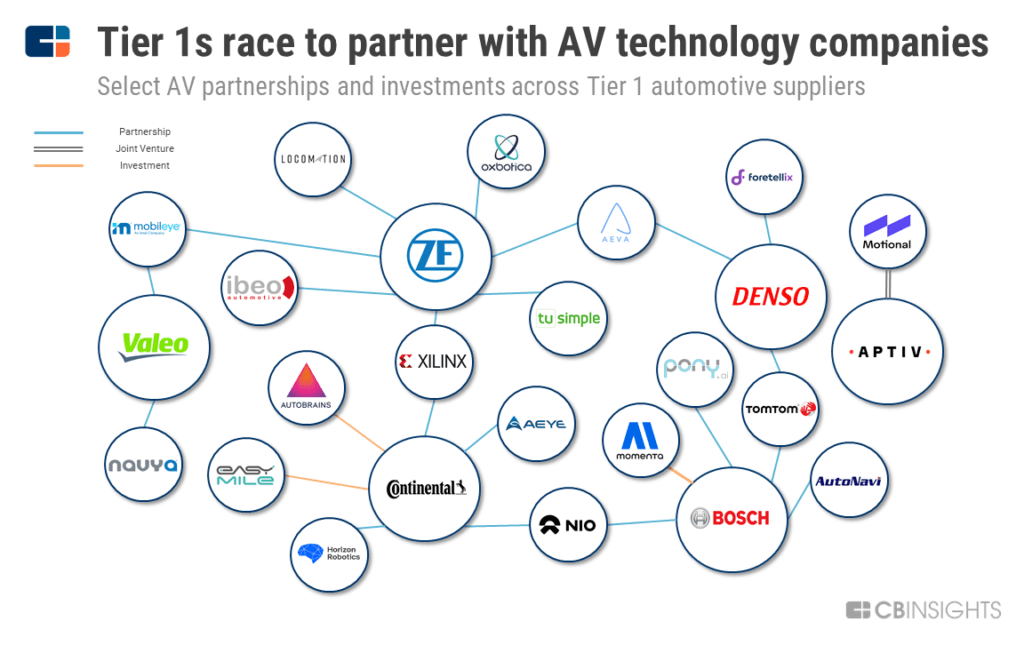 For example, Germany-based Tier 1 supplier ZF partnered with Intel’s Mobileye in 2021 to provide advanced safety systems for new Toyota vehicles using ZF’s camera and radar and Mobileye’s EyeQ4 chip. The company has also partnered with Ibeo and Aeva for lidar solutions, as well as TuSimple and Locomation for autonomous trucking solutions. ZF has invested in and partnered with autonomous driving software company Oxbotica to develop Level 4 self-driving shuttles.

Many automotive suppliers are taking a similar approach. Earlier this year, France-based auto parts supplier Valeo announced that it was strengthening its partnership with Navya to release Level 4 autonomous driving systems. Meanwhile, Continental teamed up with lidar startup AEye to integrate its lidar into Continental’s full-stack sensor solution.

Other Tier 1s are working directly with OEMs to create autonomous driving tech. In 2020, for example, Hyundai and Aptiv created the joint venture Motional to develop Level 4 self-driving passenger vehicles. More recently, the company unveiled its robotaxi built on Hyundai’s IONIQ 5 EV, which it plans to launch in multiple US markets in 2023.

Tech giants Alphabet, Amazon, and Microsoft, as well as China-based Alibaba, Tencent, and Baidu, have substantially built out their networks in the autonomous driving ecosystem. For example, Baidu’s Apollo project — an open-source software platform for AV development — has drawn in 100+ partners.

This trend is not new — big tech has been investing heavily in the automotive and mobility space for the past several years. Now, as the first generation of autonomous vehicle tech hits the road, big tech companies are looking to secure their position in the market.