What’s next for auto tech? From flying robotaxis to next generation infotainment, our analysts uncovered 21 of the top auto tech trends to watch this year.

In 2011, Peter Thiel famously quipped, “We wanted flying cars, instead we got 140 characters.”

Mobility tech has advanced rapidly since then, and concepts that were once considered futuristic are becoming increasingly common in our everyday lives.

From the growth of autonomous vehicles to flying robotaxis, we identified the top auto tech trends to watch in 2019.

A growing number of companies are reshaping mobility, offering on-demand services to cater to individual travel needs. Recognizing the significance of MaaS, traditional OEMs are repositioning themselves as mobility service companies, instead of car makers. In 2019, look for the rise of new MaaS models spanning micromobility, offerings by major incumbents, and more. 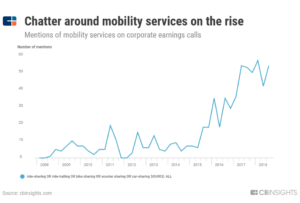 Automakers view electrification as critical to the future of the automotive space, and are accelerating efforts to electrify their fleets. One of the top auto tech trends of 2019 will be increased investments in EV, particularly by major auto incumbents.

Connected vehicle technology that enables real-time fleet visibility and data collection is opening up new revenue opportunities for automakers. A number of investors, including automakers and Tier-1 suppliers, are placing bets in the telematics space. In 2019, look for telematics to become more ubiquitous across the auto and mobility sectors. 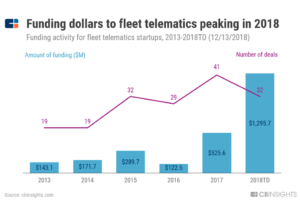 Until full autonomy is achieved, automakers are enhancing driver safety technology to work with human drivers and minimize errors.

This year, look for these technologies to be prioritized over full autonomy, which remains years from implementation. 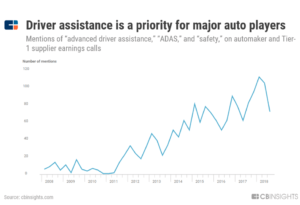 Robots remain crucial to automotive manufacturing, as new vehicle architectures require higher levels of automation and flexibility. The automotive sector already leads demand for industrial robotics, and it’s forecasted to maintain that demand in the future. One of the top auto tech trends of 2019 will be the growth of automated manufacturing across Tier-1 suppliers.

As sensor prices continue to fall, the technology will remain one of most central auto tech trends of 2019. Sensors can help automakers monitor the assembly line, streamline operations, and predict costly outages before they occur.

Car buying has remained a brick-and-mortar business for far longer than the rest of retail, but that could change soon. In 2019 and beyond, advancements in imaging technology and emerging distribution models could spark the transition to direct online buying.

Automakers are testing wearable technology to augment the capabilities of human factory workers. While relatively nascent, wearables are effectively preventing strains and stresses for workers on the factory floor. One of the top auto tech trends of 2019 will be more pilot programs involving smart glasses and other wearables.

Vehicle-to-everything (V2X) technology enables cars to wirelessly communicate with connected devices on other cars, pedestrians, and roadway infrastructure. The technology also encompasses vehicle-to-infrastructure (V2I) communication that allows cars to process traffic signals and road signs. While deployment is in its earliest stages, look for greater development and testing in 2019.

Advances in computer vision and machine learning software are enabling a new set of in-vehicle driver monitoring capabilities. Currently, human error causes roughly 95% of car accident fatalities in the US, and driver assistance is a priority across the automotive space. One of the top auto trends in 2019 will be major automakers developing their own in-vehicle sensor technology.

While still a ways away from commercialization, flying taxis are set to transform the mobility ecosystem. Although current adoption is low, estimates suggest the market potential for autonomous electric aircraft could reach $1.5T by 2040. While it’ll be some years before you can summon an UberAir, there will likely be more pilot programs and development in 2019.

Lidar sends pulses of light to measure the distance of surrounding objects and generate a 3D rendering of the environment. However, lidar’s practicality has been heavily debated, largely due to the technology’s cost. This year, expect the debate to continue while the technology becomes further refined and developed. 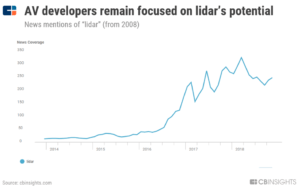 As automakers push for vehicle electrification and full autonomy, the manufacturing process is expected to grow more complex, driving the need for flexibility on the production line.

Facing disruption from e-commerce giants, aftermarket auto parts retailers are increasingly bringing their parts offerings online. As a result, the online market for auto parts is projected to comprise 10-15% of the overall aftermarket by 2030.

Walmart’s partnership with Advance Auto Parts, which launched a specialty parts store on Walmart’s website, is an example of how incumbent retailers and auto parts suppliers could partner on e-commerce endeavors. 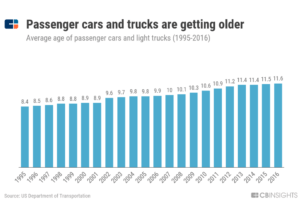 Despite a substantial market opportunity for autonomous vehicles, the timeline for full autonomy is still unclear. Electrification has become top-of-mind for automakers in recent quarters, dominating the conversation on earnings calls.

But automakers are still working towards full autonomy, and the market is projected to reach approximately $80B by 2025. 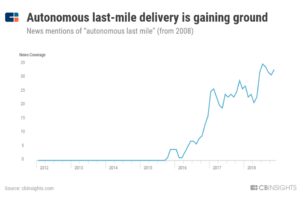 Though still in its early stages, highly-precise digital mapping technology will help autonomous vehicles localize themselves with centimeter-level accuracy. A number of automakers are investing directly into mapping technology, and Google is also making headway in the space. The growth of mapping technology and its integration into vehicles will be one of the top auto tech trends of 2019.

3D printing has simplified the automotive manufacturing process for years, but deploying the technology for parts construction or other more costly use cases will likely have limited applications. Regardless, major automakers like BMW and Ford are already using 3D printing for precise part manufacturing, and others plan to follow suit. 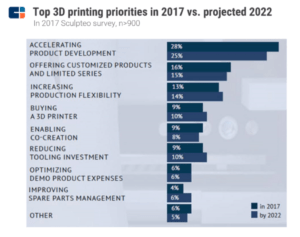 The car buyer’s interaction with the dealership is changing as a growing share of consumers start the buying process online. With customers now arriving at dealerships more informed than in the past, OEMs are equipping them with new technologies. OEMs are also redesigning their market strategies to handle the shift to digital.