Interest in auto tech has risen dramatically in recent years. Here are the trends to understand.

Technology has always been a staple of automotive research and development, but the past few years have seen a technology arms race as advances in IoT and artificial intelligence disciplines filter down to the automotive sector. Startup investment has risen dramatically as concepts once reserved for science fiction (like autonomous vehicles) move towards commercialization.

We analyzed the explosion of activity in the auto tech space using the CB Insights platform in our full webinar. Below are some of the highlights.

Using our Trends tool to quantify media coverage of the emerging autonomous vehicle (AV) complex, we see that chatter around the field now rivals that of other trendy frontier technologies such as drones and AR/VR.

Attention has even spiked past these other spaces in recent months; we’ll be monitoring this trend to see how it holds up as AV technology continues maturing and moving to market. 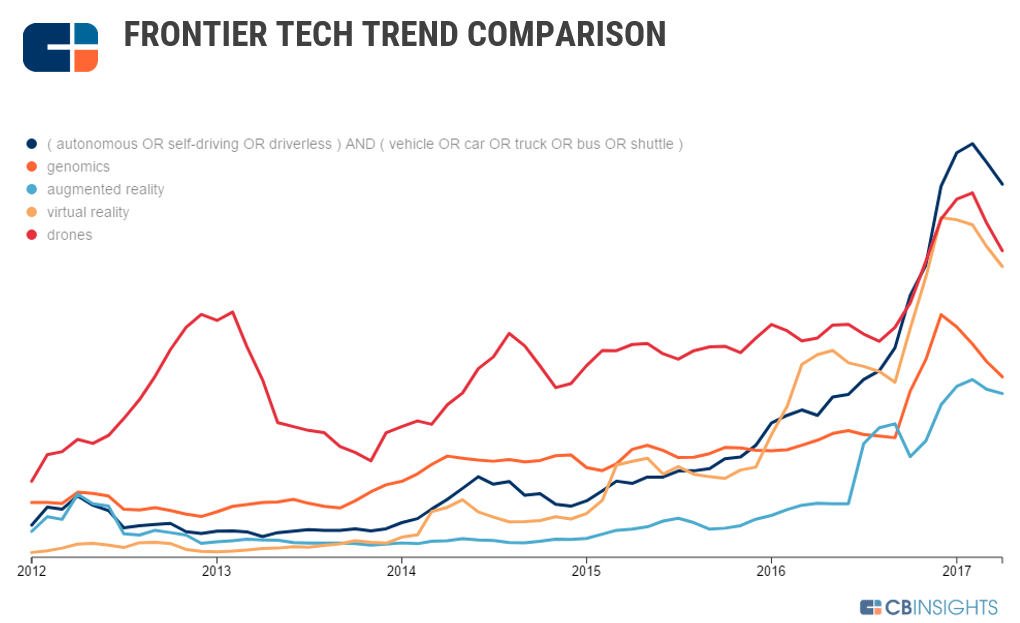 Although Google’s self-driving car (now the Alphabet company Waymo) is one of the longest-tenured AV programs, startups are now collectively drawing nearly as much coverage as that storied project. 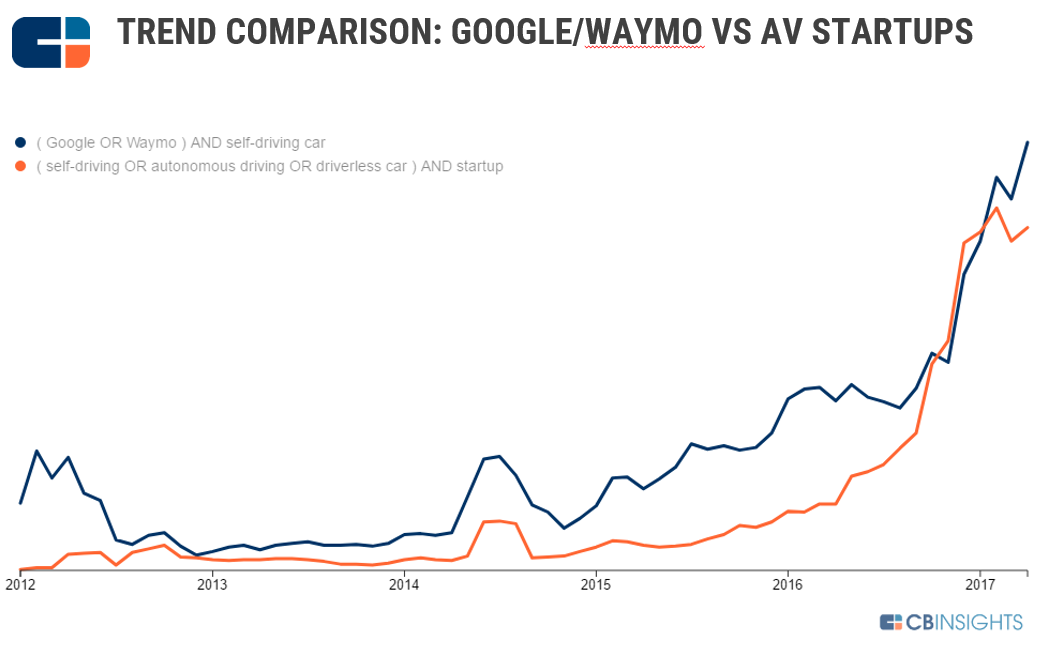 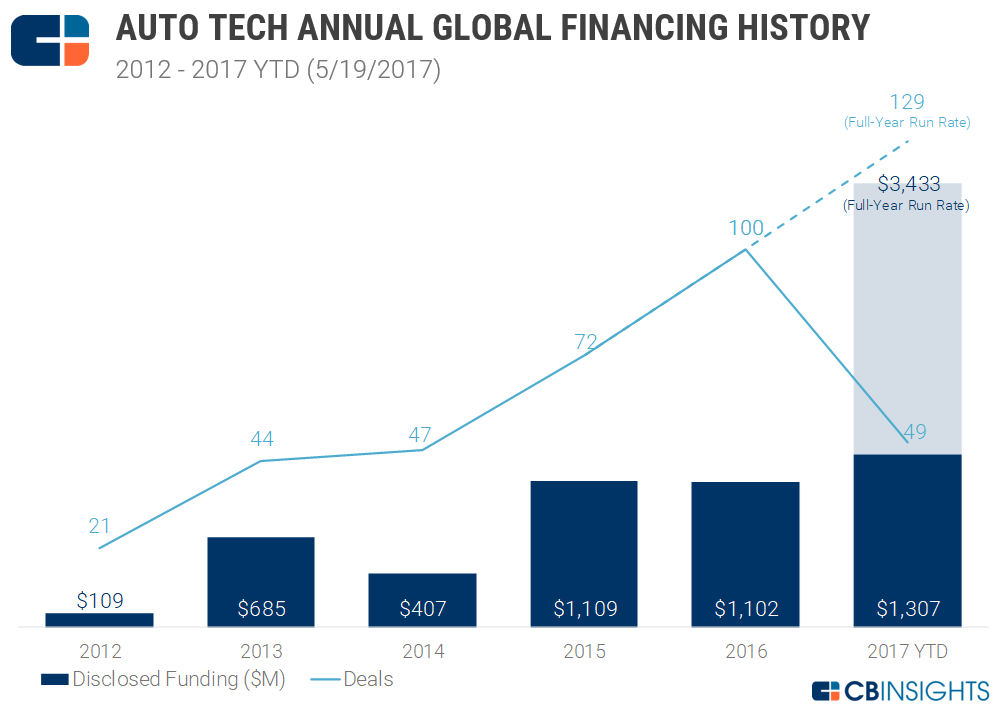 Breaking down deals by stage, the auto tech space is showing increased maturity in 2017 to date. In absolute terms, seed-stage activity is still strong, but the field is seeing more balanced activity as startups seeded earlier in the decade are now receiving mid- and later-stage investments. 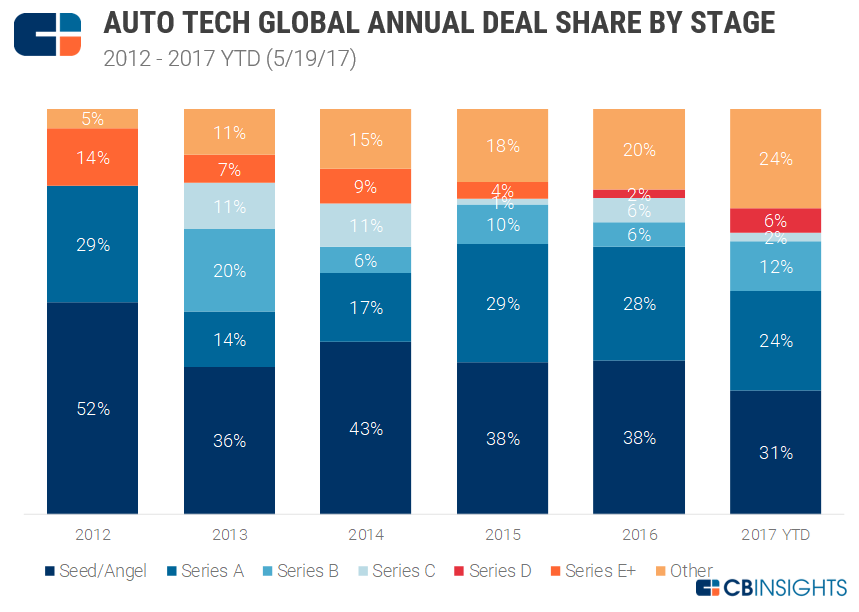 The spike in auto tech attention is also drawing a much deeper pool of backers, as the number of unique investors has jumped every year since 2012. 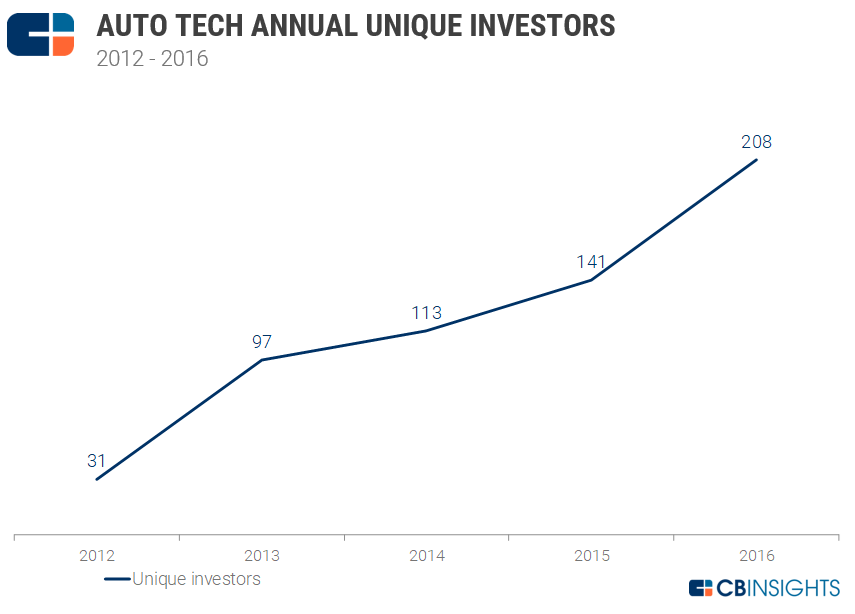 The endgame that many startups and larger companies are working towards is transforming the transportation paradigm of the last century, from individually owned and operated vehicles to fleets of shared AVs, accessible on-demand. This vision also often incorporates a shift from internal combustion to electric vehicles. 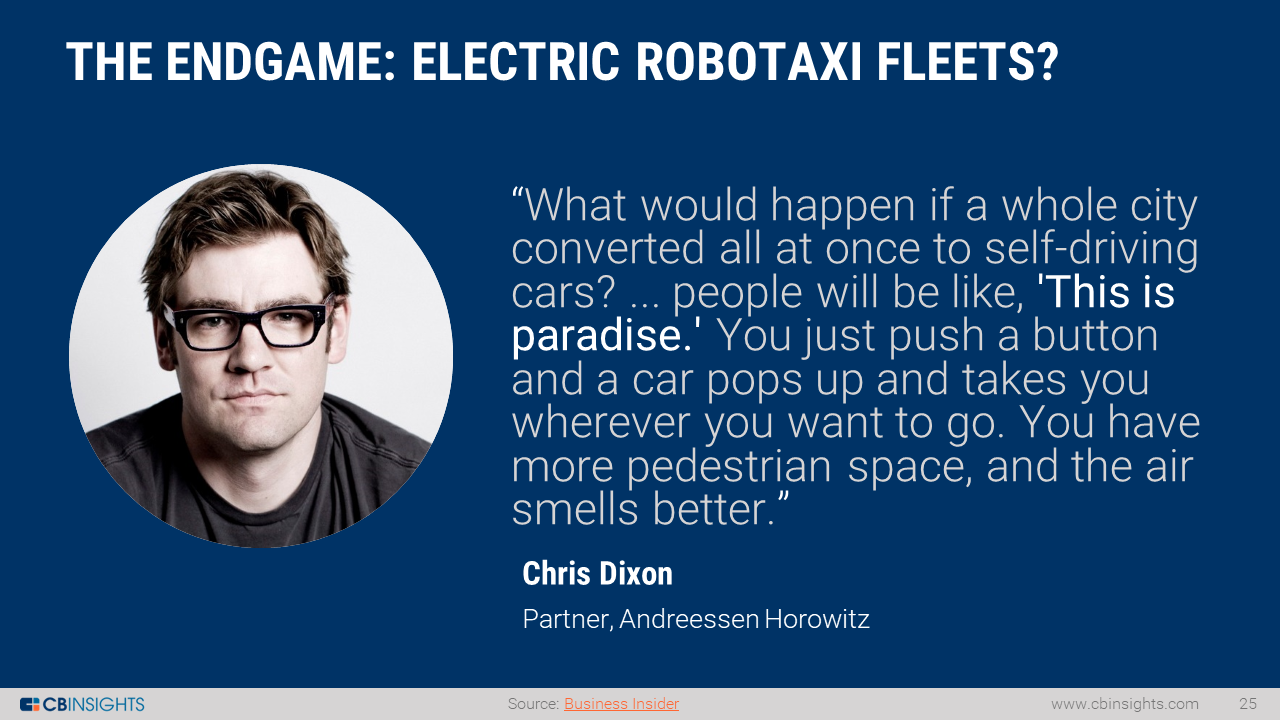 Other acronyms have popped up to describe the convergence of these various technologies, such as ACES (referring to autonomous, connected, electrified, and shared vehicles). Our definition of auto tech focuses on the autonomy and connectivity layers; for much more on electrification, check out our 72-page report, and see our blog for research around the on-demand economy. 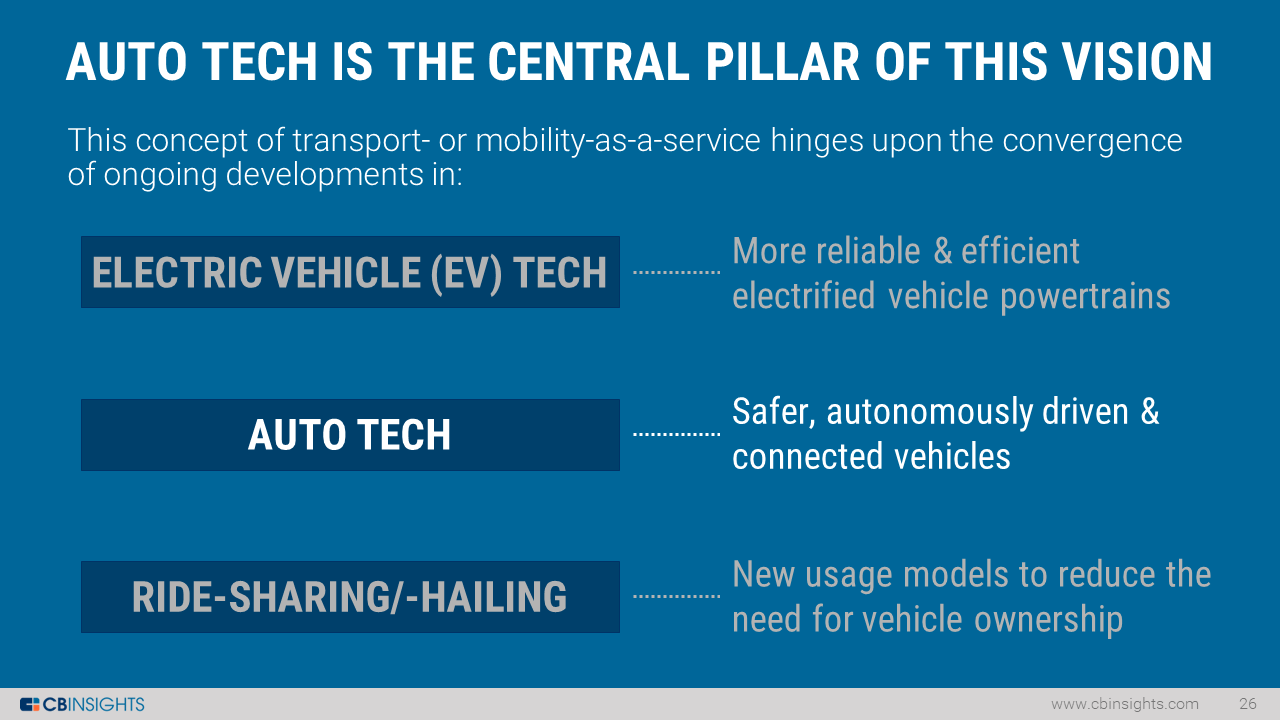 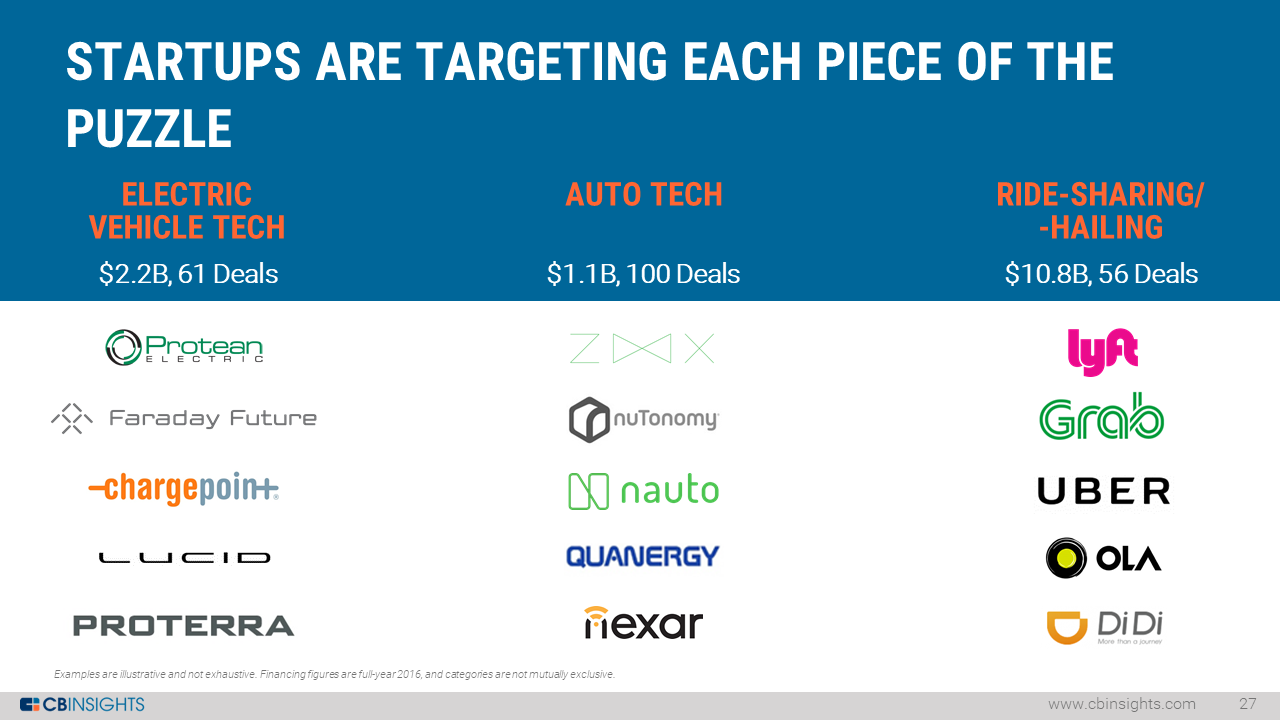 Of course, there are startups working across the spectrum of these technologies. However, these fields span very different competencies, from industrial manufacturing to expertise in machine learning and computer vision algorithms. So it’s not surprising to see startups and corporations alike joining forces to complete the equation: 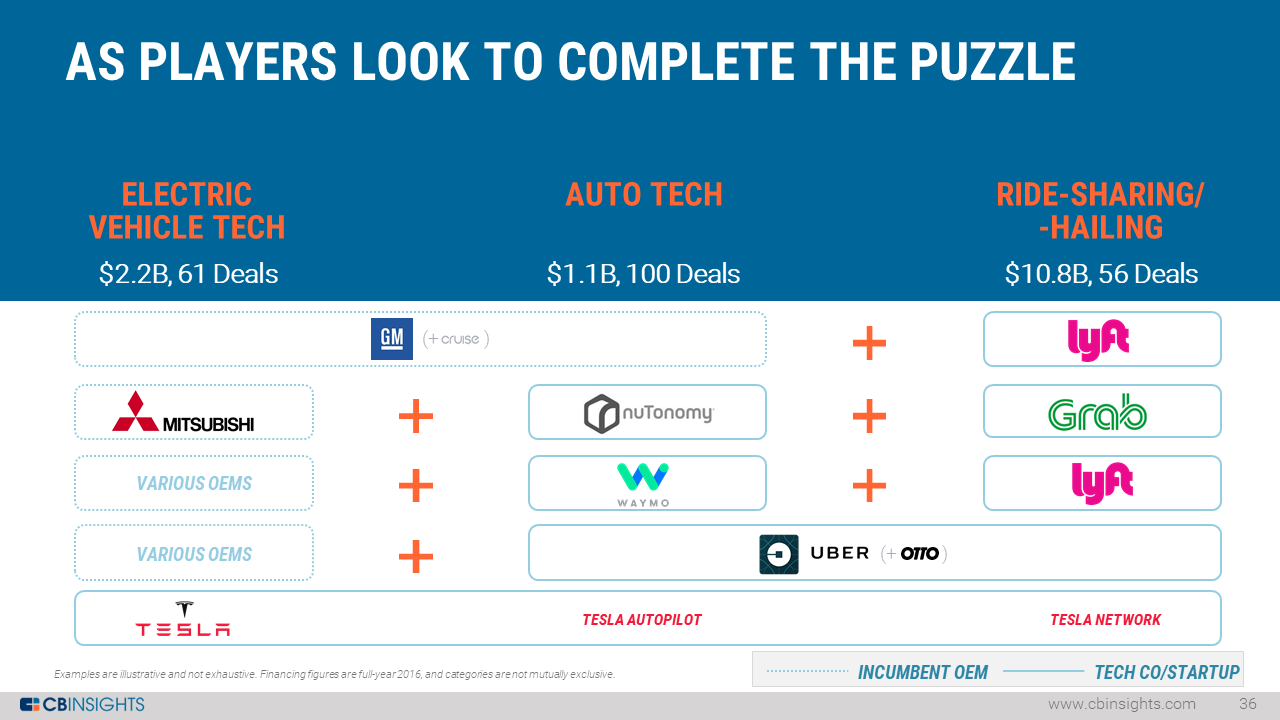 Startups working on auto tech have the potential to change the way people travel. Sign up for a free trial and look for Connected Cars & Auto Tech in the Collections tab.

Players are attacking this problem with a variety of models:

4. Waymo-Uber and the LiDAR debate

The family tree of startups founded by former Google and Tesla AV programs continues to grow. Many renowned engineers departed to establish or work at their own startups. Robotaxi startup Voyage has a particularly interesting origin story: its CEO Oliver Cameron was the VP of education startup Udacity‘s self-driving curriculum, while Udacity itself was established by DARPA Challenge and Google car veteran Sebastian Thrun. 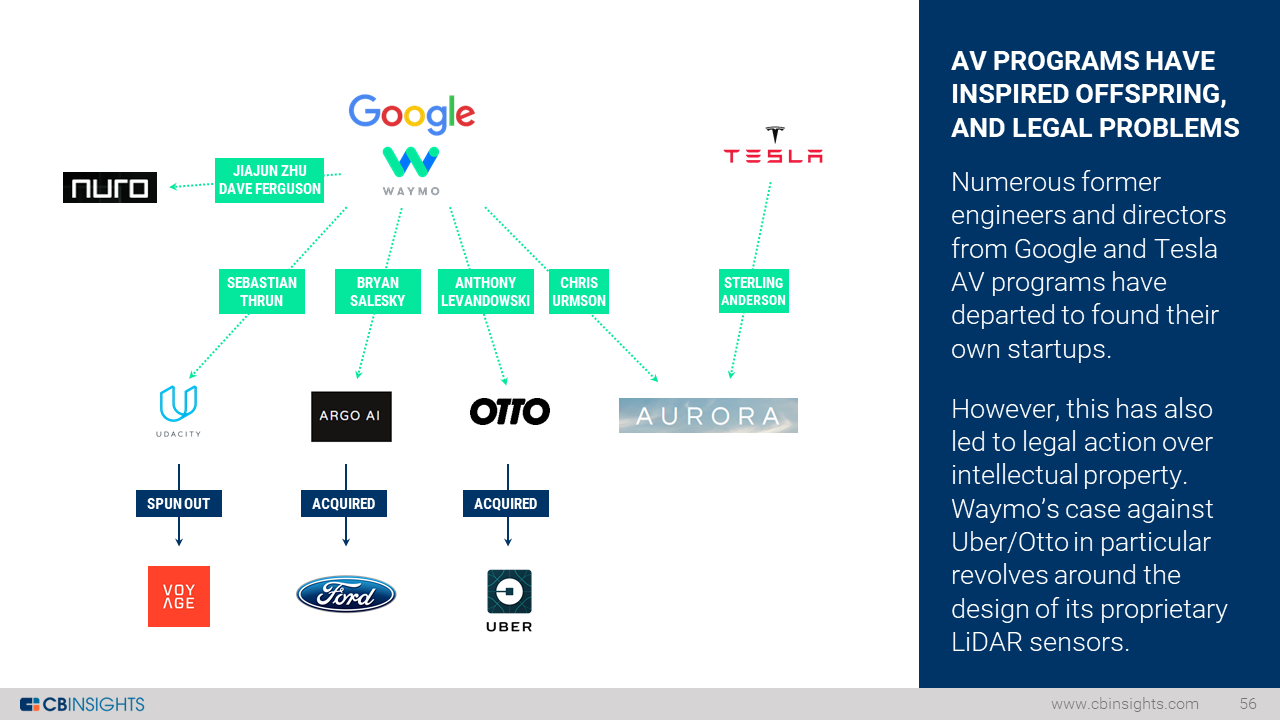 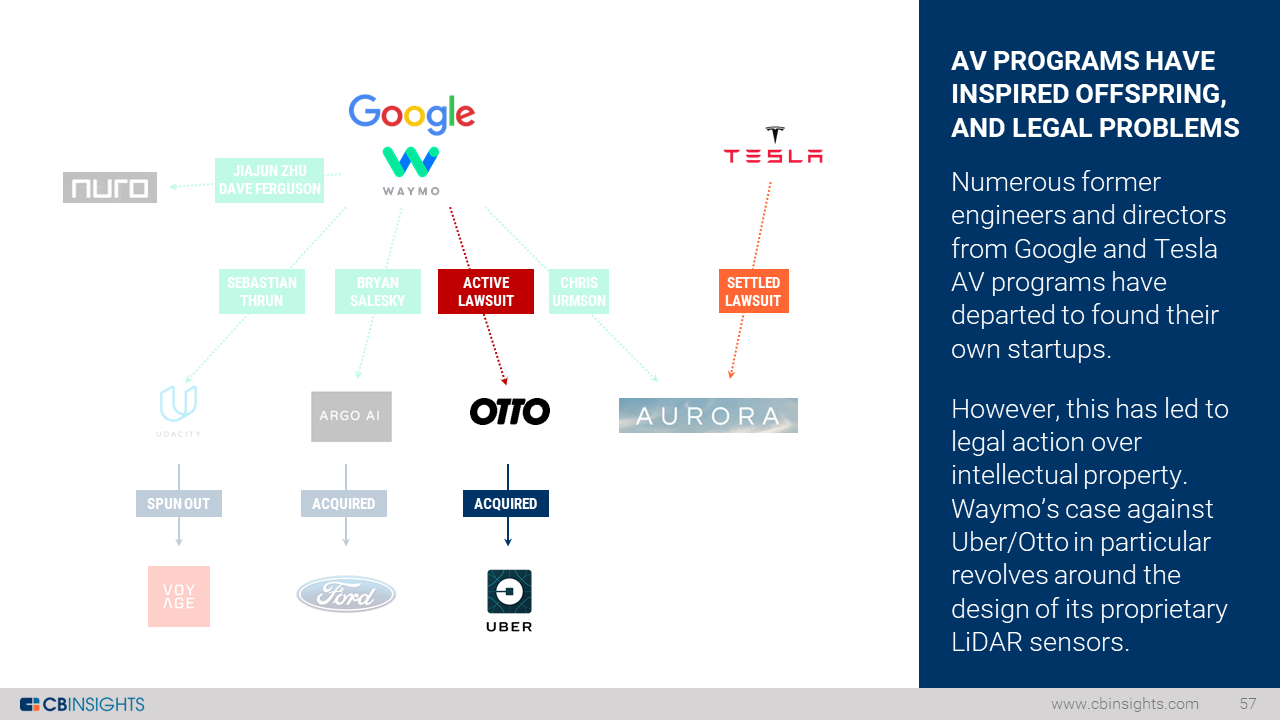 Of course, this has also led to legal action over intellectual property theft, headlined by Waymo’s suit against Uber (ongoing as of June 2017) which has led to Otto co-founder and ex-Google engineer Anthony Levandowski’s dismissal from Uber. At the heart of the dispute are Waymo’s proprietary LiDAR sensor designs; we’ve examined a few of its noteworthy LiDAR patents using the CB Insights platform.

(LiDAR sensors measure the reflection of pulsed lasers to measure distance from surrounding objects, similar in concept to radar but using light rather than radio waves. Millions of these pulses are processed into a “point cloud” that provides a detailed view of the environment surrounding the sensor.) 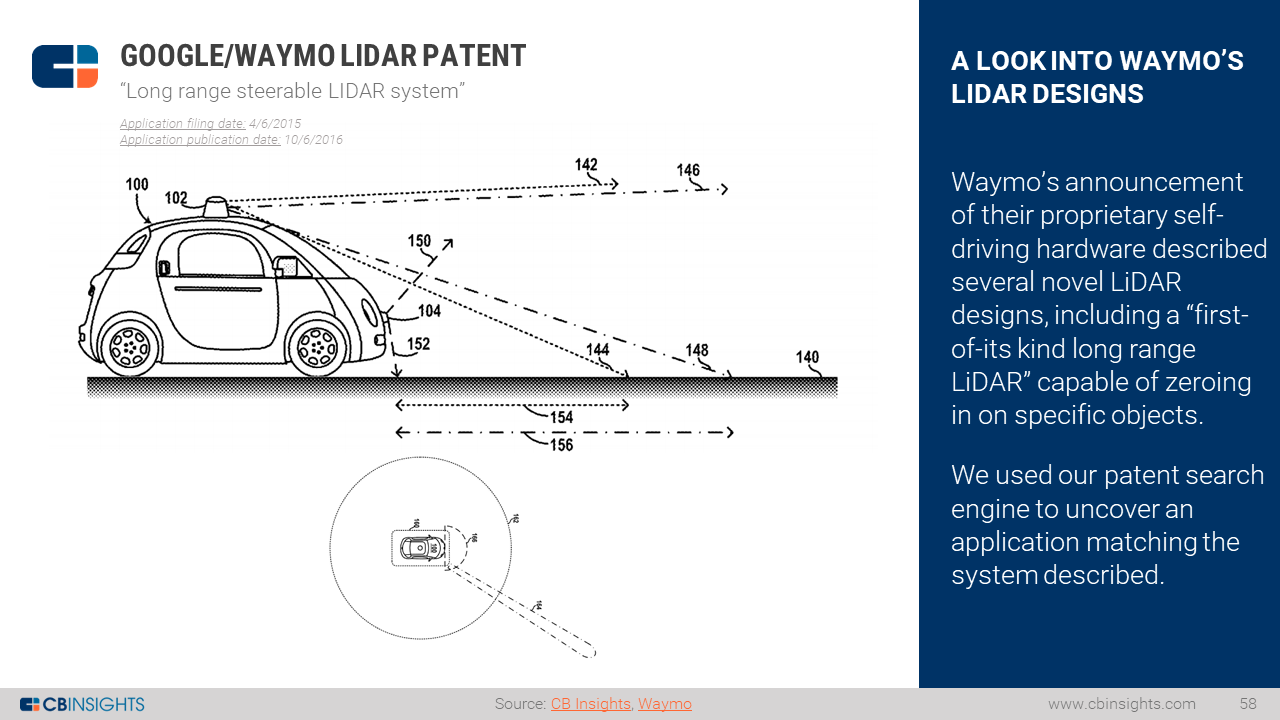 The LiDAR debate itself is a contentious one, as developers like Waymo incorporate the pricey sensor as an integral piece of their AV platform (and vigorously defend their designs in court), while others like Tesla believe LiDAR sensors to be an unnecessary input. Tesla and startups like AImotive, Starsky Robotics, and AutoX are developing primarily camera-based systems, which they believe can be fielded more quickly and/or cheaply than their LiDAR-based counterparts. 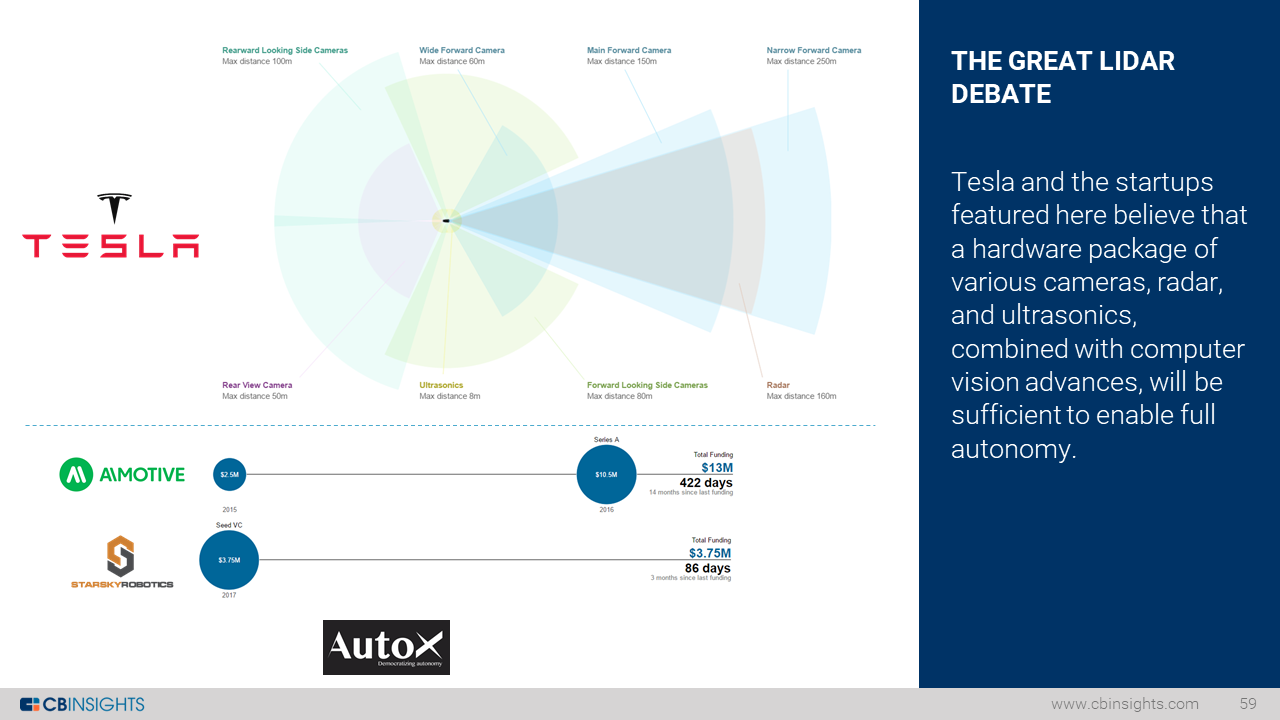 These philosophical differences stem in part from another heated debate in the AV community, regarding the proper strategy (or strategies) to roll out autonomy itself. Players are weighing decisions such as fleet deployment versus direct consumer sales, how quickly to make features available and educate consumers, and whether to skip partial autonomy altogether.

5. The shifting landscape of suppliers, manufacturing, and retail

Looking more broadly, LiDAR is also a good example of the scramble to supply the components of value in the future AV ecosystem. Current LiDAR sensors are produced by companies such as Velodyne (which saw a $150M investment from Ford and Baidu in 2016), but are often costly and complex to manufacture. Lead times for these sensors have stretched to months as AV developers are snapping up units at a record pace. 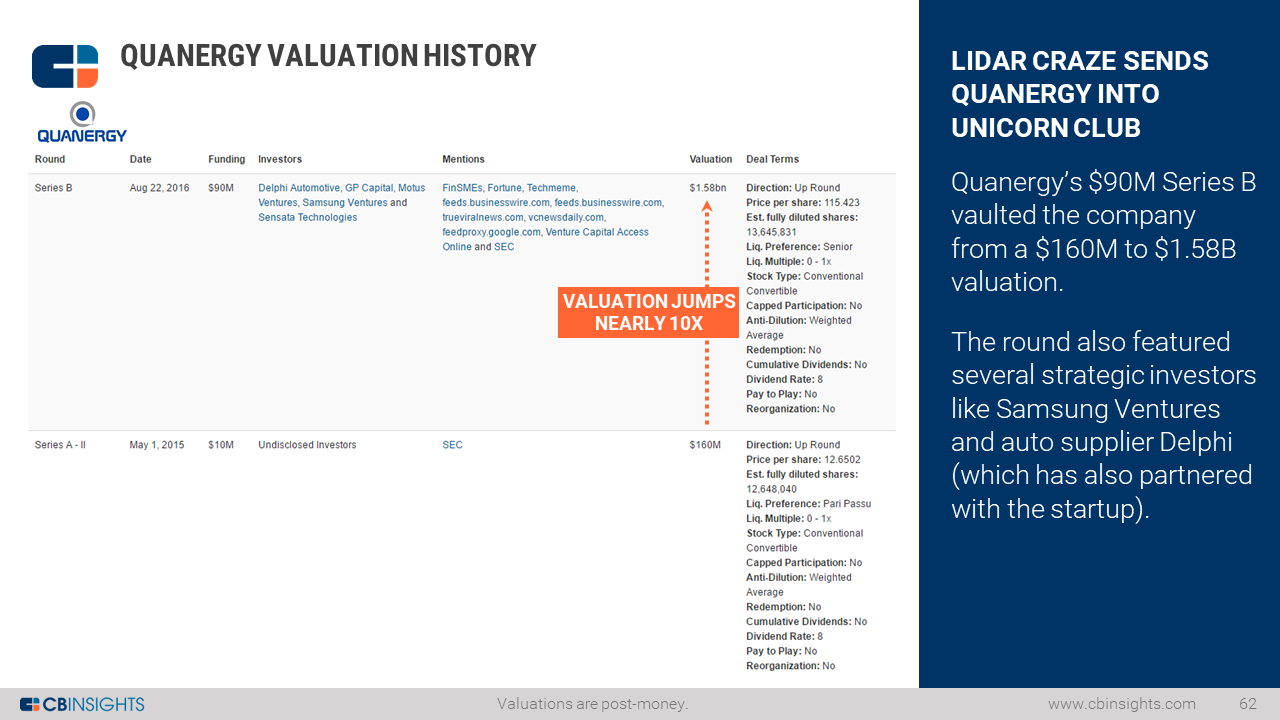 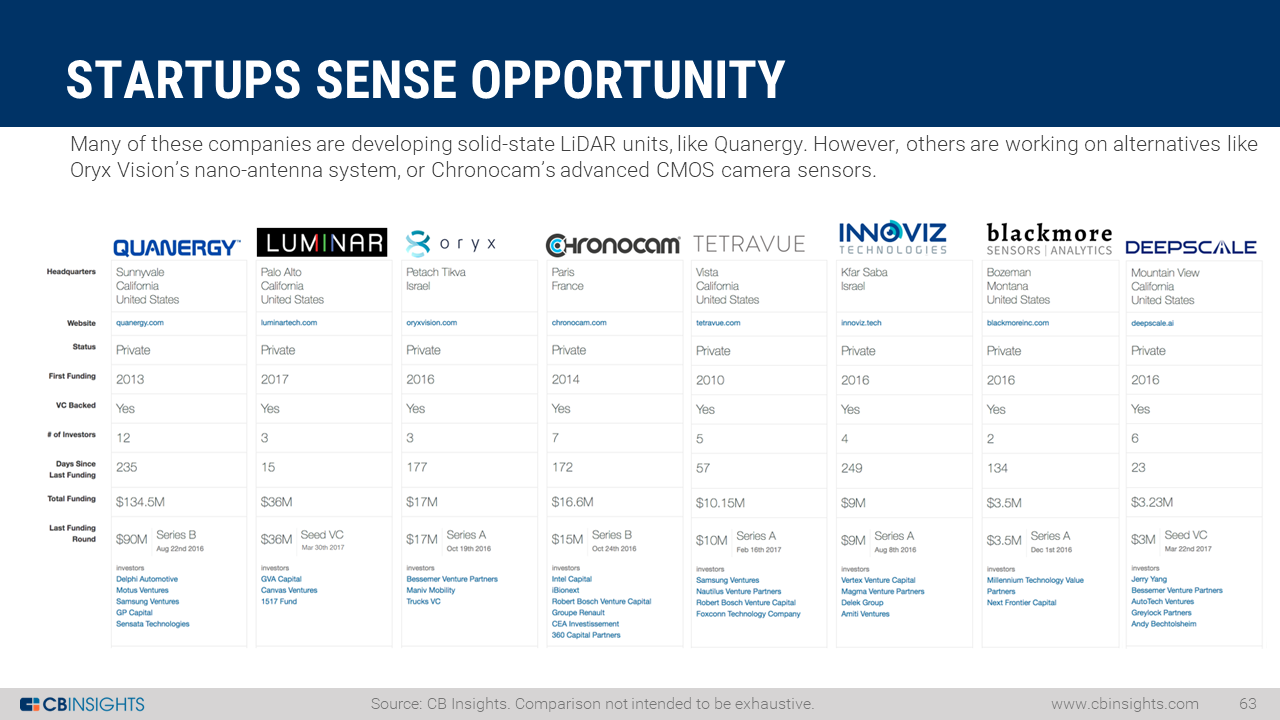 Multiple startups are hoping to carve out a slice of the expected demand for autonomous vehicle sensor and perception equipment. Many of these are hoping to improve existing LiDAR technology and/or drastically reduce its cost, such as the unicorn Quanergy. Others are working on alternatives, like Oryx Vision’s nano-antenna system or Chronocam’s advanced CMOS camera sensors.

Sensor and vision tech is just one example of the major value shifts looming over the automotive supply chain. Expected growth in connected and autonomous technology is driving both startup and M&A activity in spaces like vehicle-to-vehicle/vehicle-to-anything (V2V/V2X) communications hardware, high-definition mapping, semiconductors, and more.

In manufacturing, 3D printing is seeing a resurgence across industrial fields like construction tech after largely flopping with consumers. Auto is no exception, as manufacturers make strategic investments in 3D printing startups for industrial rapid prototyping and metalworking use cases. Mixed reality tech is also being employed in the vehicle developing process to save time and cost. 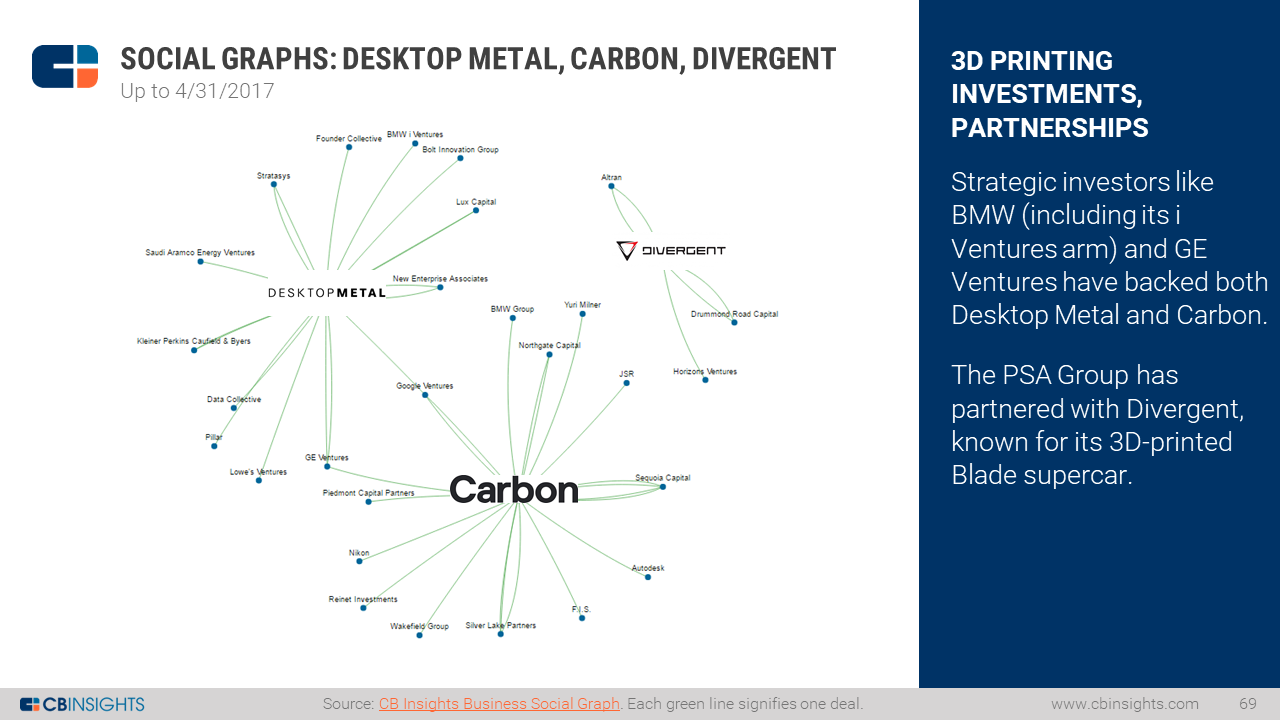 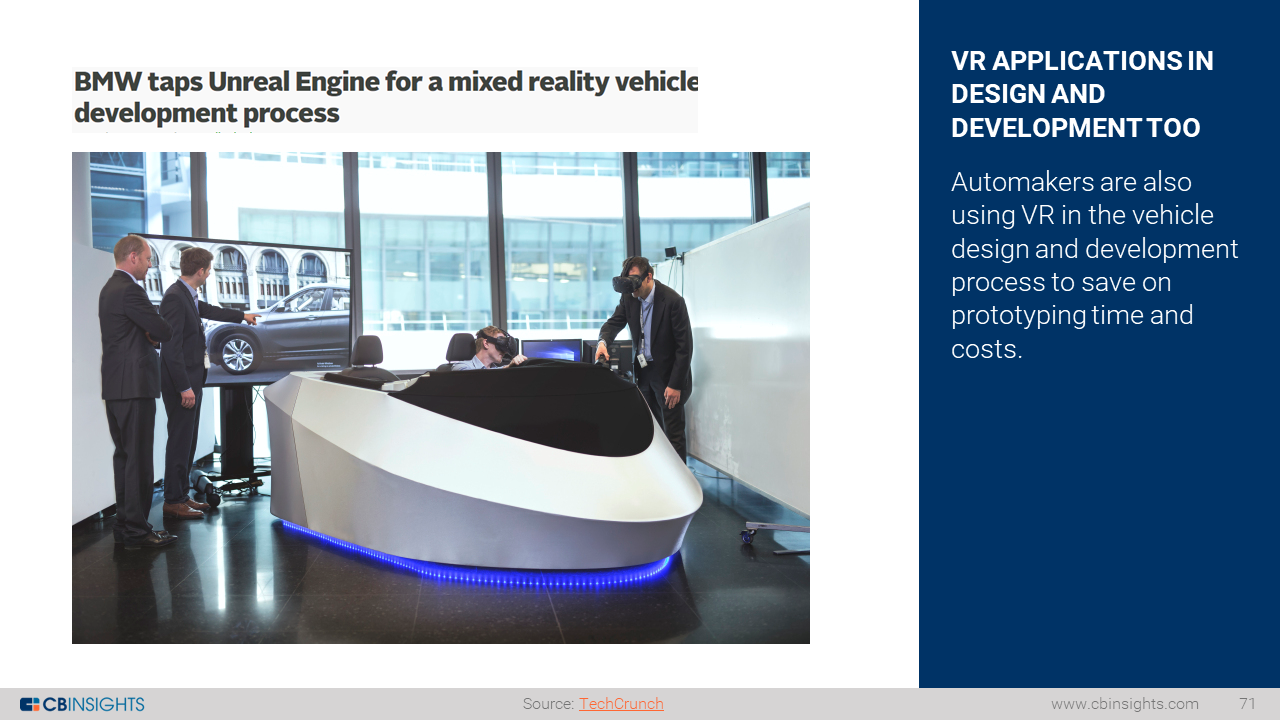 Retail startups have proliferated both in the US and abroad in dynamic markets like China, as companies capitalize on the less-regulated used car market to build online-native platforms and novel peer-to-peer transaction models. Retailers are also experimenting with AR/VR applications, which could pair nicely with online purchasing to further reduce the need for physical retail presences (although dealers are still protected by regulations in many areas).

Beyond this, a shift towards fleet-owned AVs would obviously upend traditional consumer-facing automotive retail altogether. 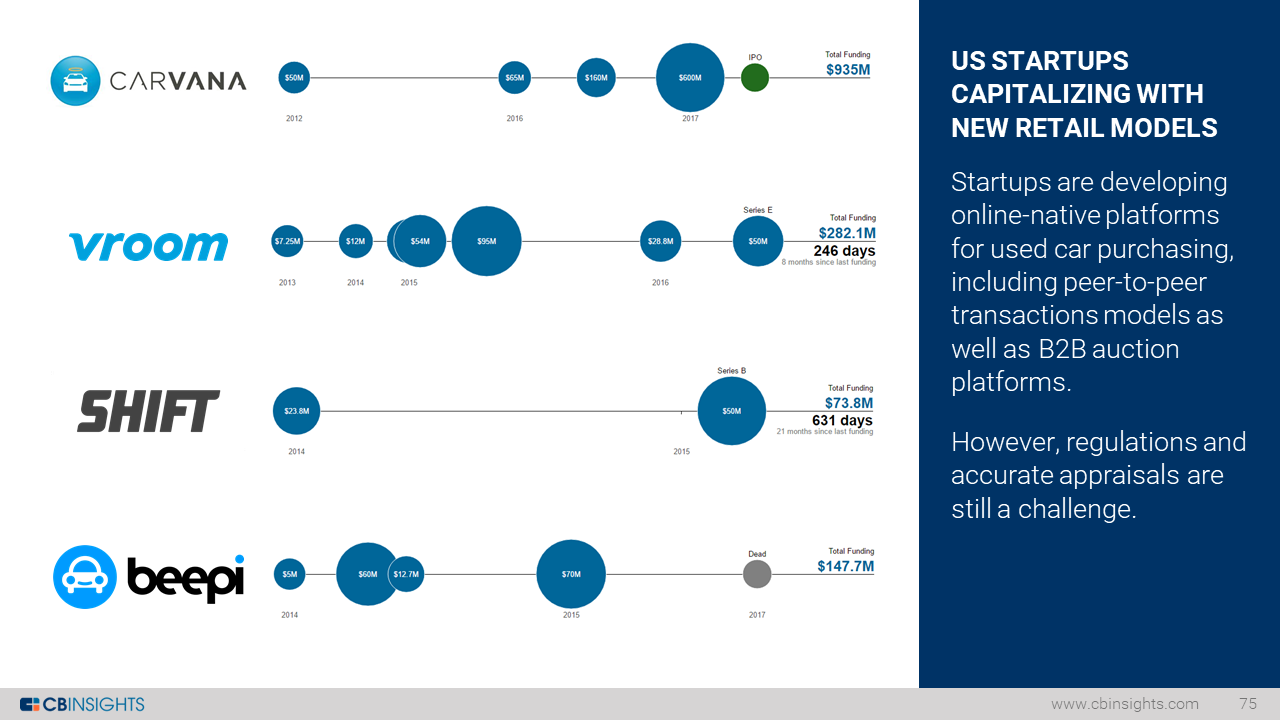 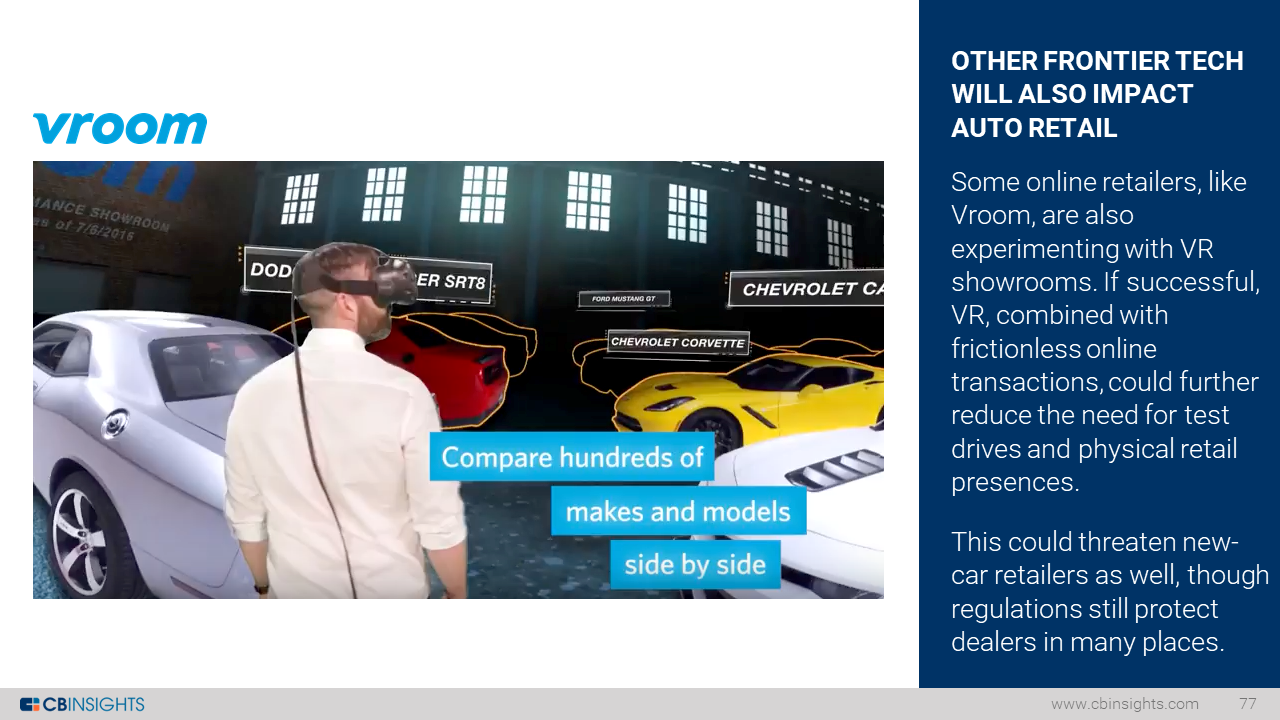 6. The road ahead: New form factors and rethinking vehicle design

Advances in auto tech, electrification, and ride-hailing/ride-sharing may enable a clean, ownership-free AV future. But technological advances may also demand fundamental changes to automotive design and culture. In the US especially, sharing models may clash with individual commuter patterns and preferences for relatively space-inefficient personal vehicle designs. 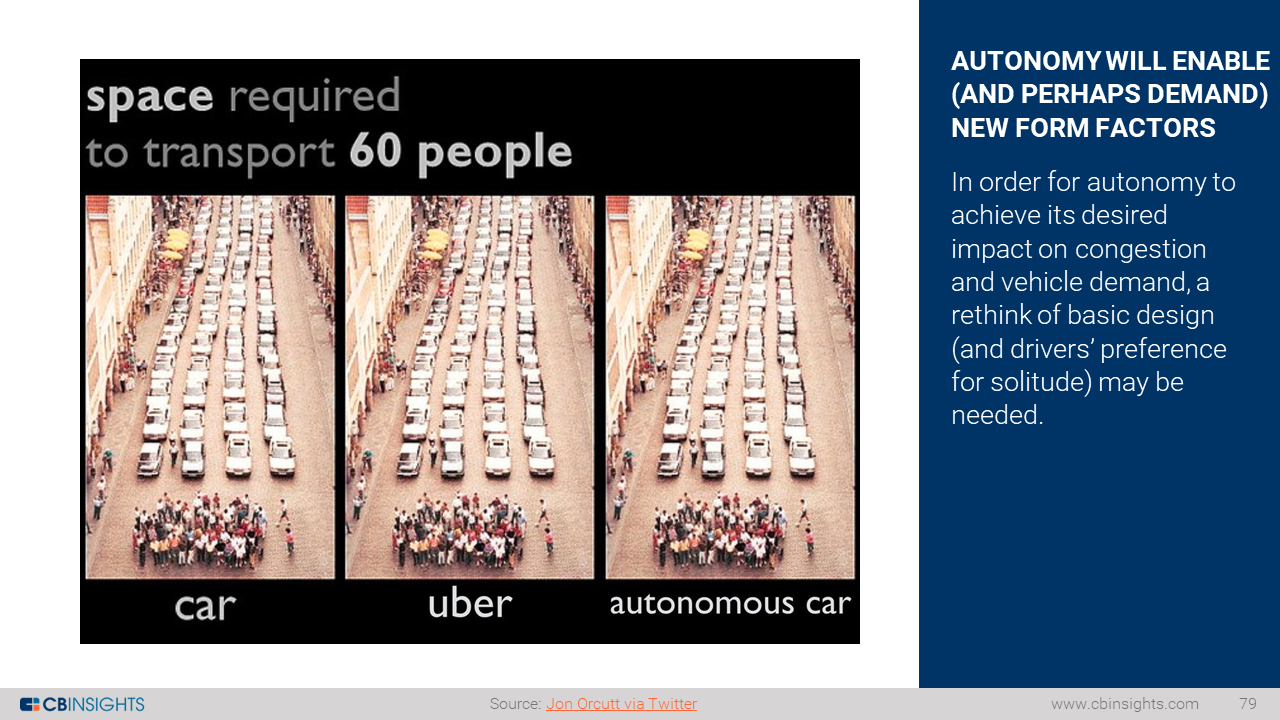 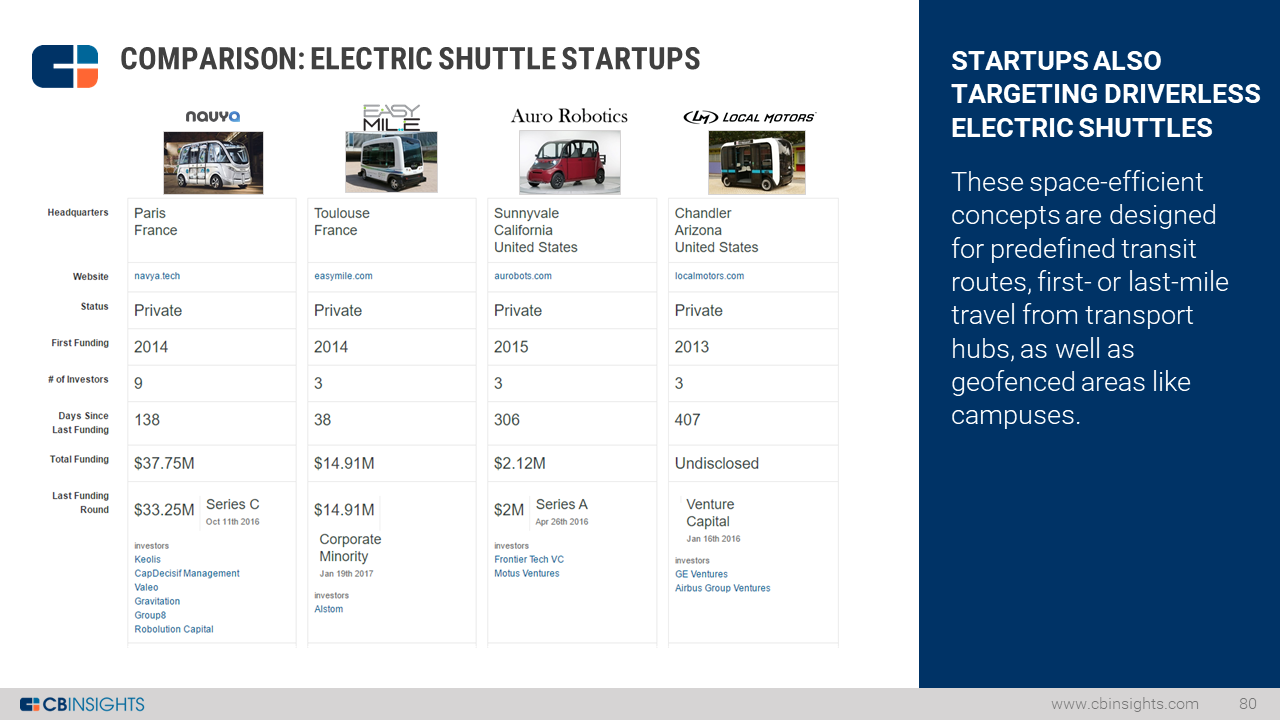 Especially in dense urban centers, larger vehicles like driverless buses and shuttles may need to join smaller cars in order to achieve desired impacts on traffic patterns and road density. Widespread connected AVs will also present opportunities to rethink the driver-focused design paradigms of the past century. Vehicles expressly designed for fleet services are one possibility, and modular platforms like OSVehicle‘s EDIT may be crucial for flexibility in the uncertain early days of autonomous- and fleet-based vehicle adoption. 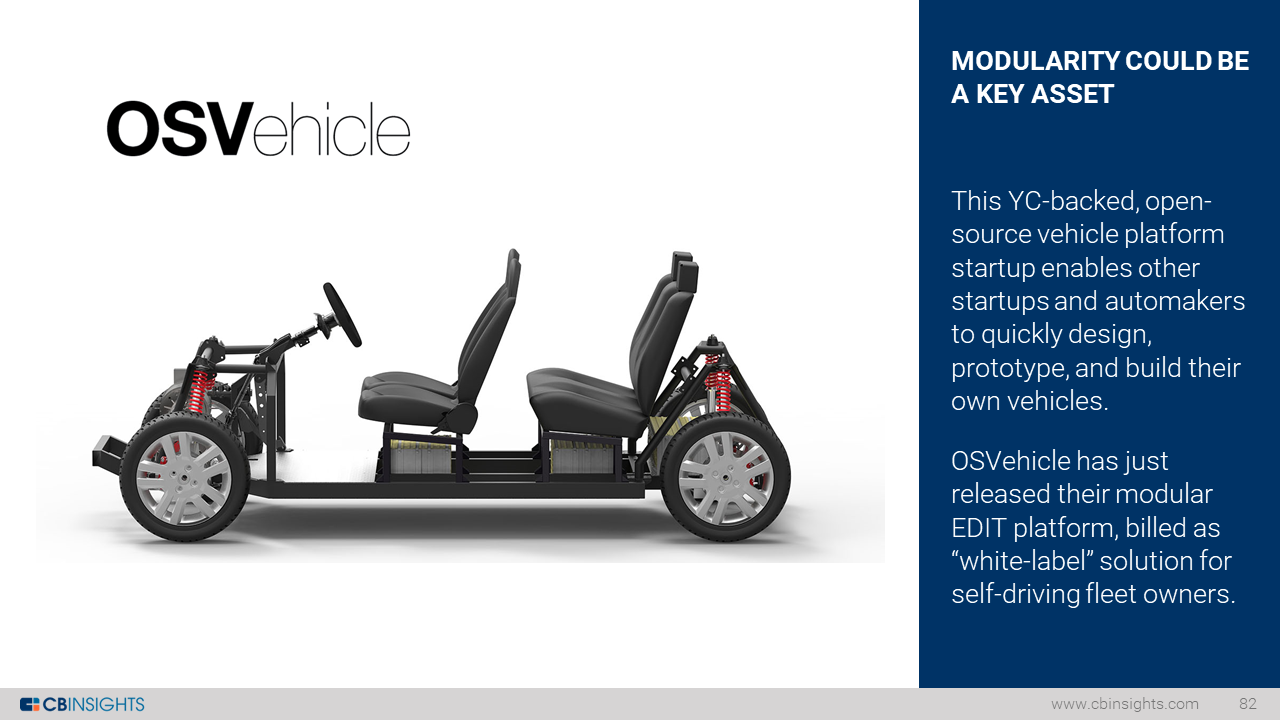 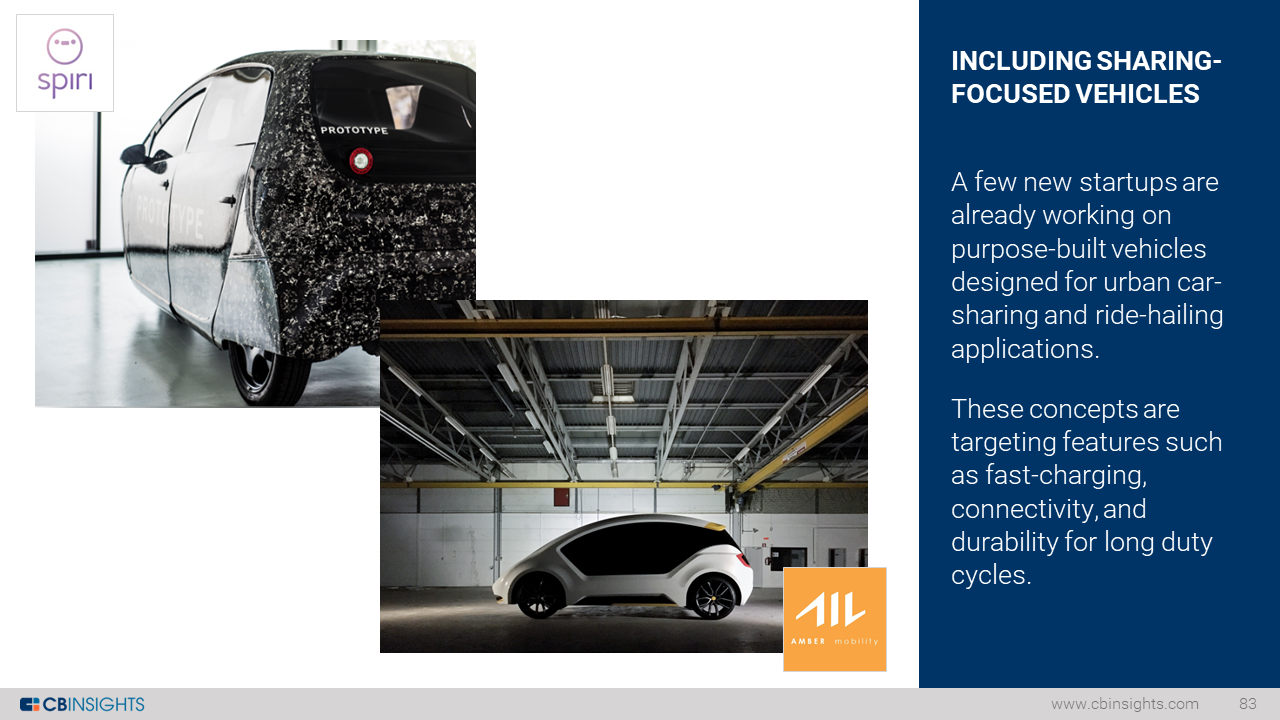 Besides passenger vehicles, many other startups are looking to upend the status quo in trucking, mass transit, air travel, and beyond. For more coverage on all of these evolving trends, stay tuned to our weekly auto tech and mobility newsletter. 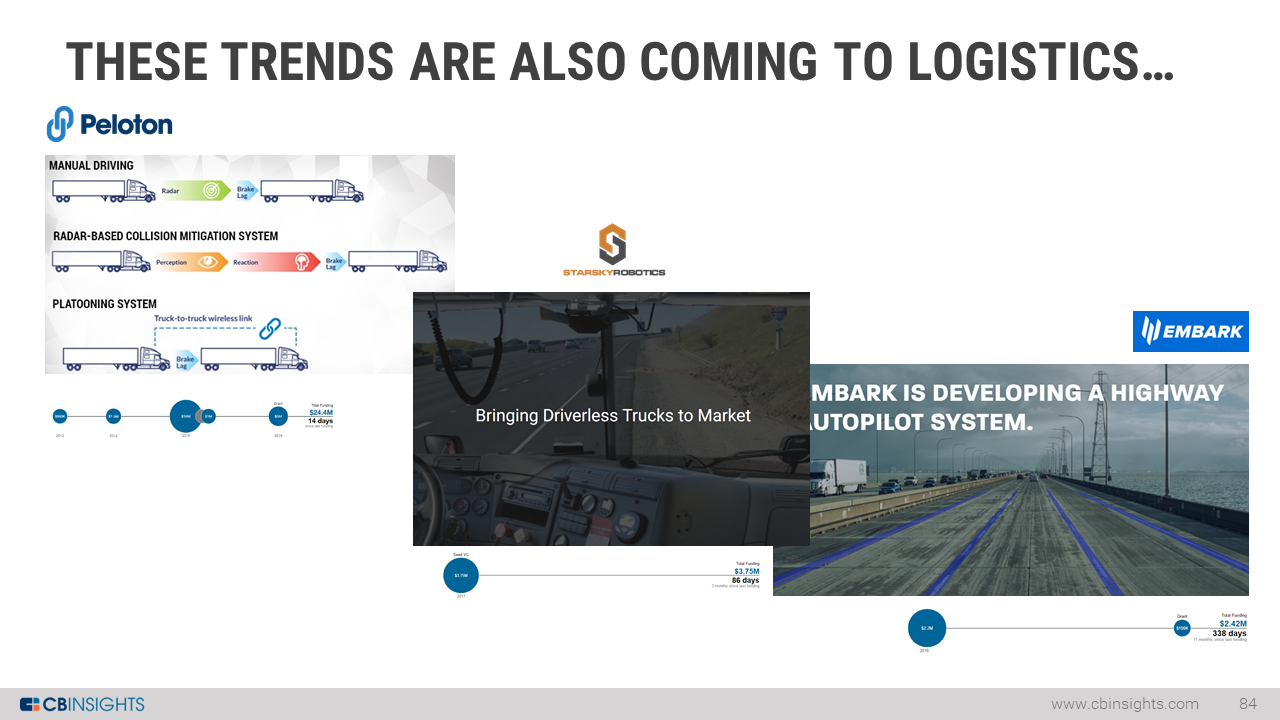 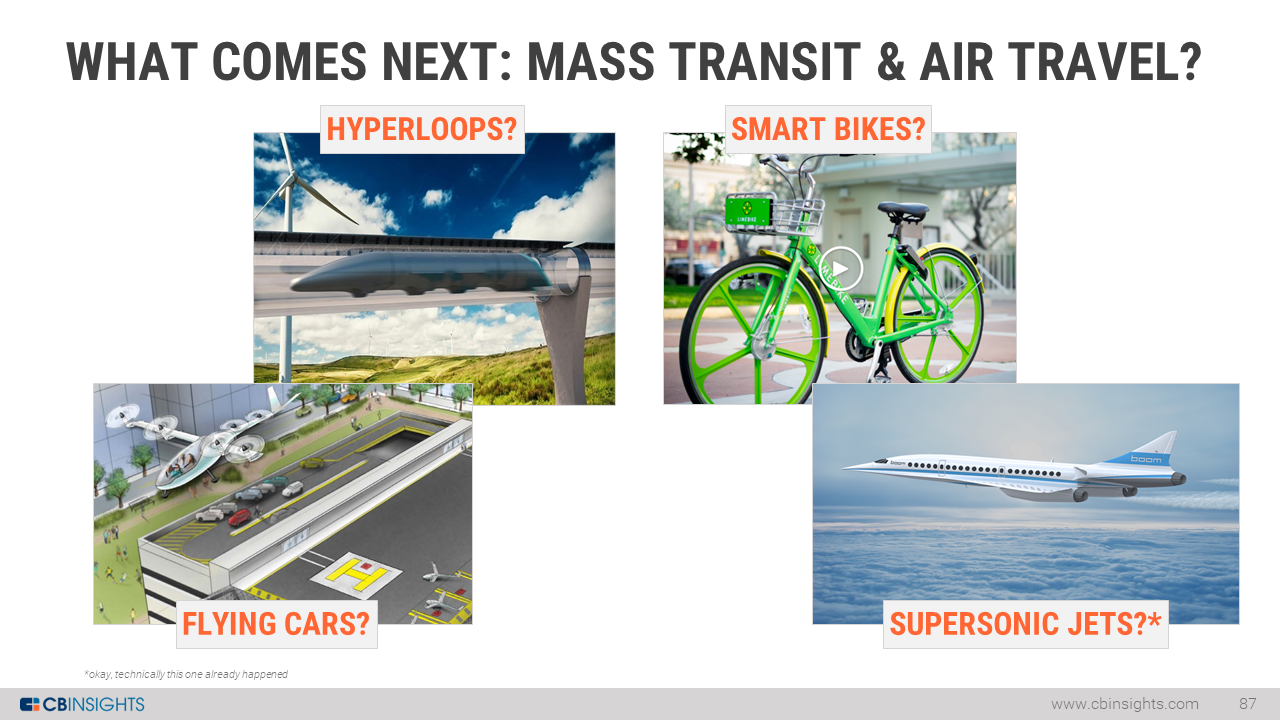 Want to see our full research on auto tech? Check out the full webinar, and sign up for a free trial of our platform to explore the Auto Tech Collection.