With $450M invested across 36 deals to date, auto tech startups are on track for yearly highs in both deals and dollars.

2015 marked a record year for deals to auto tech startups as a growing host of private companies have begun targeting various categories within the automotive ecosystem. In 2016, investor interest has been further piqued by deep-pocketed corporates on the hunt in the space, with GM acquiring self-driving tech startup Cruise in March as well as Verizon purchasing connected vehicle company Telogis in June.

With these developments in mind, we used CB Insights data to analyze how financing trends in the space have evolved in 2016. We define auto tech as companies that use software to improve safety, convenience, and efficiency in cars, specifically looking at:

With $450M invested across 36 deals to date, 2016 is off to an even hotter start than last year, with a funding total already just shy of 2015’s full-year figure of $478M. At their current run rates, both deals and dollars to private auto tech companies are on track for fresh annual highs. If dollar funding in particular sustains its momentum, it will finally eclipse the mark set in 2013 (which was largely attributable to a $400M financing to Mobileye).

As autonomous driving startups have caught the eye of investors and industry observers alike, it’s not shocking that the biggest deal thus far went to Zoox, which completed a $200M financing towards the close of June from investors such as DFJ and Lux Capital.

Over half a dozen other early-stage self-driving startups have also raised in 2016 to date, including five that we examined in early June and the UK-based FiveAI just this week.

Other fields of auto tech have seen strong interest as well. Nexar and Pearl Automation raised in June, with both startups leveraging smartphones to provide advanced driver safety and assistance tools. Nexar is building an AI-based dashcam app, while Pearl is fielding a connected backup camera (with more products in the pipeline). Vehicle-to-vehicle and vehicle-to-X mesh network provider Veniam also closed its $22M Series B in February. 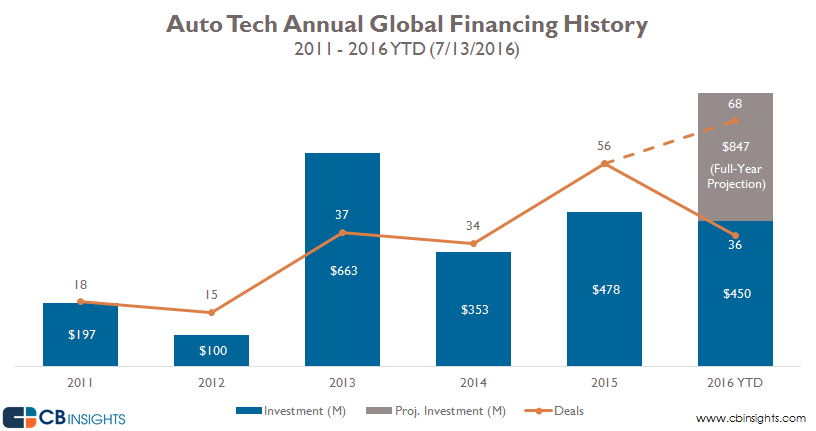