Large venture-backed exits within auto tech have been sporadic since 2012, but acquisition interest continues to grow.

This year has seen an explosion of interest in auto tech, as corporations pile into the autonomous vehicle space and investors increasingly target startups in self-driving and other auto tech disciplines. While both venture capital and corporate investors have ratcheted up their auto tech activity, exit activity has been relatively sparse, though headlined by several marquee deals.

Using CB Insights data, we took a look at exit activity from 2012-2016 within our definition of auto tech, which includes startups using software to improve safety, convenience, and efficiency in vehicles (and excludes activity in fields such as energy/powertrain, parking, and rentals/marketplaces). We focused on VC-backed companies and first exits (for example, this would leave out subsequent acquisitions after a company’s IPO).

Though VC-backed auto tech exits have only recently begun to gain traction, a healthy variety of sub-disciplines have seen exits. Telematics has seen a pair of $500M+ exits to date, the first being FleetMatics‘ IPO back in October 2012. The company was recently acquired by Verizon earlier this month, as part of the telecom provider’s major push into vehicle telematics services. The other was the exit of Lytx, a video telematics provider, which was acquired by Chicago-based private equity firm GTCR in February 2016.

Mobileye, the Israeli developer of advanced vision and driver assistance systems, leads the pack with its August 2014 IPO that valued the company at $5.31B. Of course, GM’s March acquisition of Cruise Automation has further catalyzed the frantic activity within the ADAS and autonomous driving space. GM described the deal value as $581M, below the reported purchase price of $1B, though this excludes many compensation and earn-out payments associated with the deal. Cruise was backed by investors such as Felicis Ventures, Spark Capital, and Qualcomm Ventures.

2016 has also seen the first exit from the nascent field of vehicle cybersecurity, as connected car supplier Harmann snapped up TowerSec in January. TowerSec develops firewalls for both ECUs (engine control units) and vehicle telematics systems.

In all, there have been a dozen VC-backed exits since 2012, with 5 coming in 2016 alone. The chart below shows the largest auto tech exits with disclosed valuations. 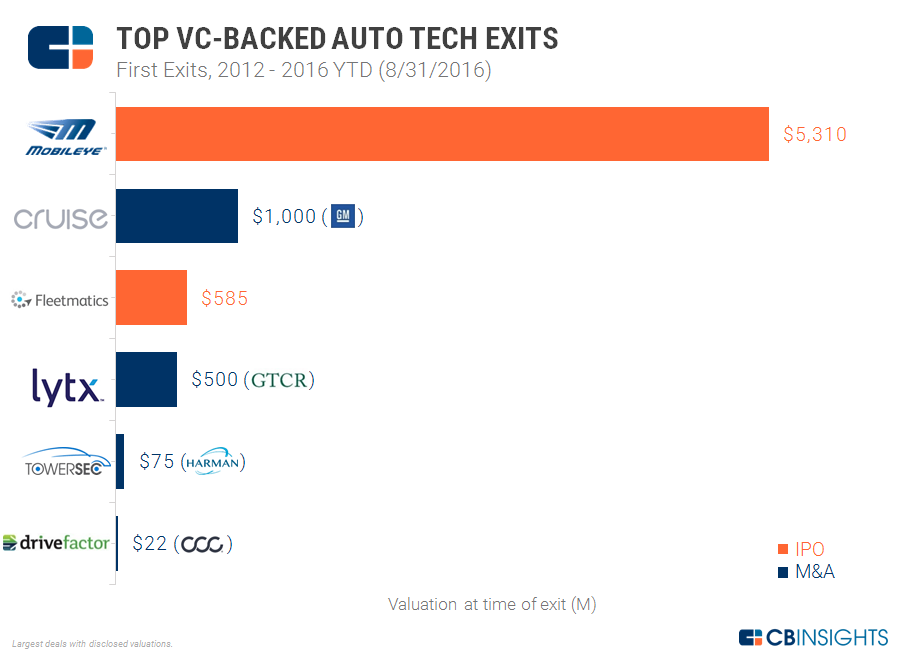 Not listed here is Verizon’s other major fleet telematics pickup in Telogis (June 2016), which itself acquired connected navigation startup Maptuit back in 2012. Telogis was said to have been seeking a valuation around $1B on revenues of $120M, but the final terms of the deal were not disclosed.

Also not included are some noteworthy transactions involving non-VC-backed companies, such as the Audi-BMW-Daimler consortium’s $3.1B purchase of mapping company HERE from Nokia (which closed in December 2015). Another is Uber‘s acquisition of truck automation startup Otto earlier this August, as part of the ride-hailing company’s aggressive strategy to counter rivals in self-driving technology.

Otto, founded by a number of alumni from Google’s Maps and self-driving units, was reported to be self-funded in early August, and no external investors have been disclosed since the announcement of Uber’s takeover. The deal is said to be worth up to 1 percent of Uber’s most recent valuation if targets are met, implying a price of $680M for the trucking startup.