Despite a funding growth that has been buoyed by a $250M growth equity round, Australia continues to lack both later-stage and local investors.

Greater Australia (Australia/New Zealand) tech companies have raised 61% more funding in the first 8 months of 2014 than all of 2013. On the surface this paints a picture of a flourishing tech scene, but diving deeper into the data, that picture isn’t so great.

YTD 2014 has been helped by the largest funding in Greater Australia over the past 3 years into Campaign Monitor which raised a $250M Growth Equity round backed by Insight Venture Partners and Accel Partners. Campaign Monitor is a Sutherland-based email marketing company. This was the first round of financing Campaign Monitor has raised, despite being previously contacted by a patient Insight Venture Partners five years prior in 2008. If this round is removed, Australia tech is actually on pace to have its worst year since 2011 with just $92 million invested in the market.

While the 2014 funding picture is in reality, not so promising, total deals are actually on pace to slightly increase from the 2013 peak of 88 to over 90 in 2014. This growth in deals largely stems from many seed and angel investments where there is solid growth. 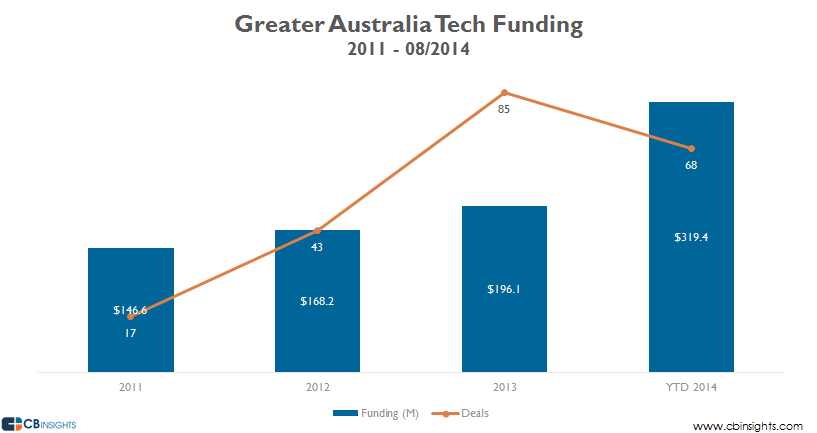 “In splitting my time between Sydney and San Francisco, I’ve identified a lack of capital for mid and late-stage start-ups as a major hurdle for young Aussie companies that have managed to secure incubator or angel investment.”

CB Insights data confirms this. Early-stage investments have dominated financings since 2011 with 82% of deals coming pre-series B, and of all early-stage deals, only 16% were series A financings. In fact, since 2011 there have been less than 20 mid-stage (series B/C) deals total in tech, with 2013 accounting for a bulk of the mid-stage deals. 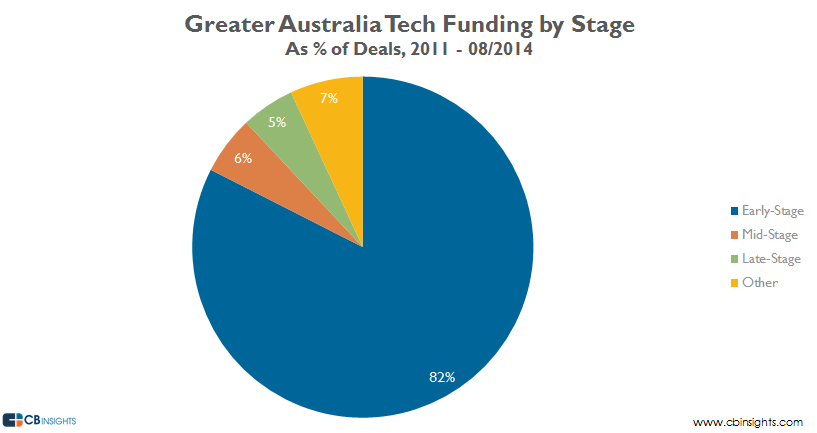 The majority of tech deals in the Greater Australia region since 2011 have come in Internet & Mobile companies. When diving deeper into sub-industries, Collaboration & Project Management startups saw the most deals as multiple early-stage investments were made in the space over the past few years including three rounds of financing for Canva, which has raised over $8M from investors including Founders Fund, Shasta Ventures,and InterWest Partners, among others. Education & Training companies saw the second highest number of deals over the time period, with Smart Sparrow raising two rounds including a $10M Series A from UniSeed, OneVentures, Yellow Brick Capital.

On the Mobile front, Advertising Sales & Marketing and Location-Based & Navigation companies led, with companies like Posse and Tapit each raising multiple rounds of financing since 2011. 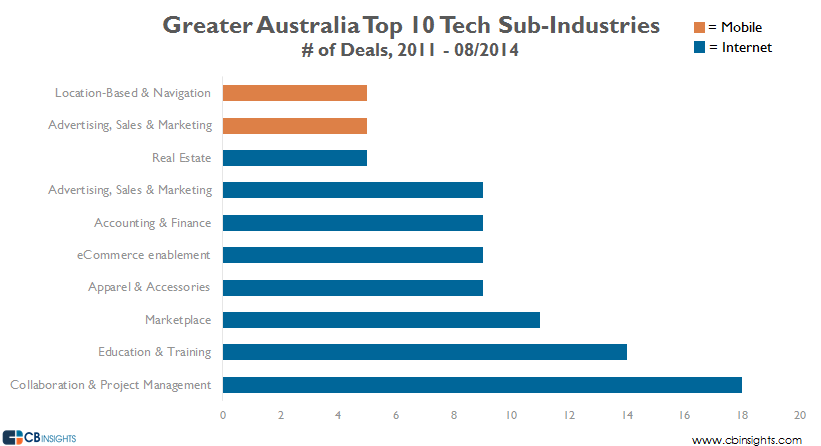 Where Are Investors Coming From?

When Canva went to raise their series A round funding, many speculated that they were forced to go overseas due to the lack of institutional investors within Australia. After eventually closing the $3.6M round with 4 of the 5 investors from the US, it seems that speculation was right. The data further proves this, as 43% of all institutional (non-angel) investors in Greater Australia Tech deals since 2011 were US-based, while just 38% were local. This figure compares poorly to Berlin and London which had 64% and 59% local investor participation respectively. 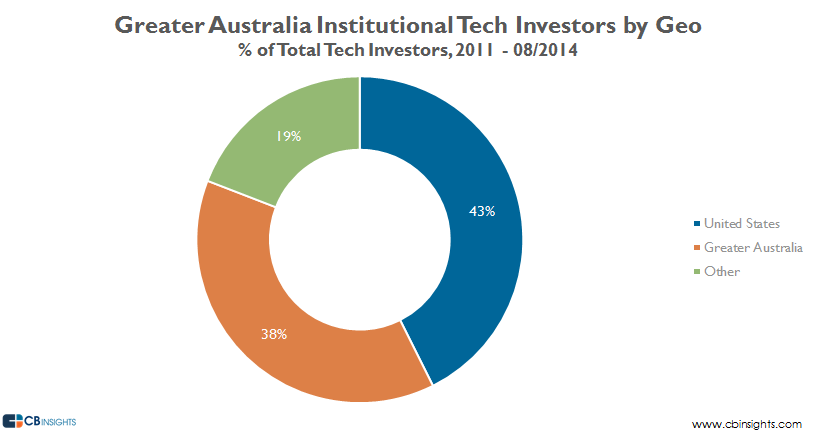 Many have wondered if poor VC returns and lack of later-stage investors will ultimately doom Australia’s tech scene. With the region’s hottest company and eventual tech IPO candidate Atlassian, which was recently valued at $3.3B, and the two latest VC-backed tech IPOs (Freelancer.com, OzForex) all lacking local investors, it’s clear that the mid- and late-stage funding gap will need to be filled by non-Australian investors for the time being.