Research Brief
1653
Analyzing Austin Ventures' fund raises, investments and exits to see if the data reveals that they were a zombie venture capital fund.

Austin Ventures was one of the most prominent venture capital firms in Texas, but as Dan Primack reported, Austin Ventures has foregone a new fund and, as a result, it ceases to be a VC any longer.

We’ve talked previously about how you can use data to identify Zombie Venture Capital firms and given how things have unfolded with Austin Ventures, it presents a unique case study on how to use data to do this. We used CB Insights Investor Analytics tool to take a look at how Austin Ventures’ investment and exit activity has trended over time to see if there were early signs of zombification. Here are some of the signs that the data turns up:

For VC funds or bankers looking to syndicate deals or who are seeking follow-on financing for a company, the identification of zombie VCs is an important way to ensure you’re focused on the right prospective investors.

Note: 100% of the visualizations and data you see in this analysis are directly from the CB Insights platform’s Investor Analytics tool. No Excel was used or harmed.

Fund size consistency has been shown to be a determinant of VC performance. And unlike some other brand-name venture firms such as Union Square Ventures and Benchmark, Austin Ventures had steadily increased its fund sizes over time. Since its inception, Austin Ventures consistently raised new funds every ~3 years (like many funds) and so the fund’s last raise being in 2008 was a clear indication that the firm might be having a tough time getting LP interest.

Despite it’s inability to raise a new fund, the data shows that Austin Ventures has not seen any dramatic slowdown in deal activity over the past five years, averaging around six deals per quarter. 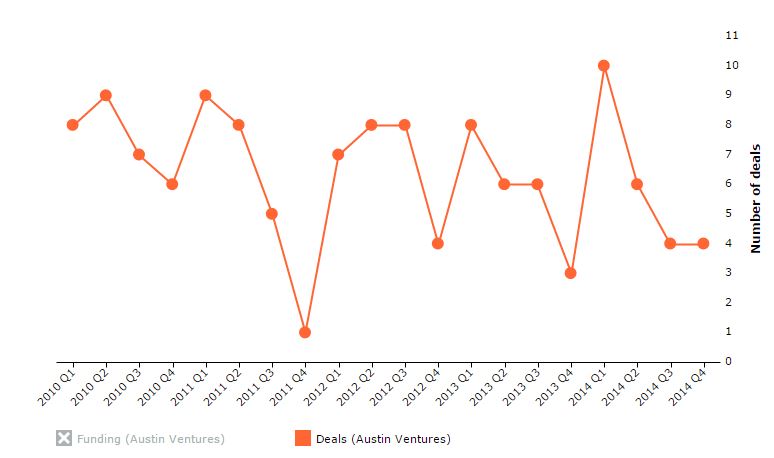 But deal activity doesn’t tell you everything. When we break down Austin Ventures’ investments across new deals vs. follow-on deals into existing portfolio companies, a much different picture emerges.

Of note, we see that firm’s percentage of follow-on deals has increased drastically over the past two years as indicated by the vast swaths of orange on the chart below. If you’re evaluating a fund, the lack of a recent fund coupled with high follow-on funding rate is often a high fidelity signal that the firm may be having difficulty fundraising. 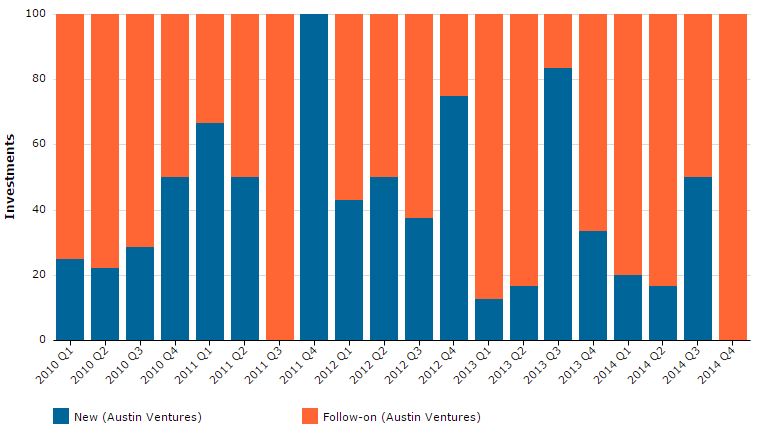 Excluded from the unicorn exit trend

On the exit front, Austin Ventures had a solid historical record of notable exits including the IPOs of Series A investments into HomeAway, RetailMeNot and Bazaarvoice. But more recently, Austin Ventures has not notched a huge exit of the magnitude near those above and this is an environment when tech M&A and IPOs and billion dollar exits have been mushrooming. The firm’s lone IPO exit since the start of 2014 was Upland Software‘s $192M IPO and does not count any $100M+ disclosed acquisitions since UnderArmour’s purchase of MapMyFitness for $150M in late 2013.  With a $900 million fund, unicorn exits become important to move the needle, and Austin Ventures did not have those.

The chart below highlights Austin Ventures’ exits with disclosed valuations going back to 1999, taken from their profile on CB Insights.  Exit activity had diminished as of late and given their fund size, they didn’t have the size of outcomes that LPs would expect.