Research Brief
3063
At the current run rate, deal volume this year will grow by 11%.

With Oculus shipping its first consumer product in late March, AR/VR technology has entered the mainstream. Investor interest has continued to ramp up, and more than 25 VC firms and corporates like HTC Sequoia and 500 Startups have banded together in the Virtual Reality Venture Capital Alliance to find the next big thing.

Dealmaking has exploded over the past few years especially within VR specifically, as we highlighted in an analysis of funding trends to AR vs. VR. And on the corporate side, we’ve witnessed a ramp-up in corporate-driven M&A in the space as tech giants like Google and Apple go to battle over what is expected to be the next visual interface.

Using CB Insights data, we looked at the funding trends to AR/VR beginning in 2012.

With the year only halfway done, 2016 has seen $1.3B invested over 76 deals, which already translates to 85% growth over 2015’s funding total. At the current run rate, deal volume this year will grow by 11% over last year’s total.

Much of the boom in 2016 can be attributed to Magic Leap‘s Series C fundraising in February, which was a massive $793M round. The stealth AR headset developer has now raised $1.4B in total funding. 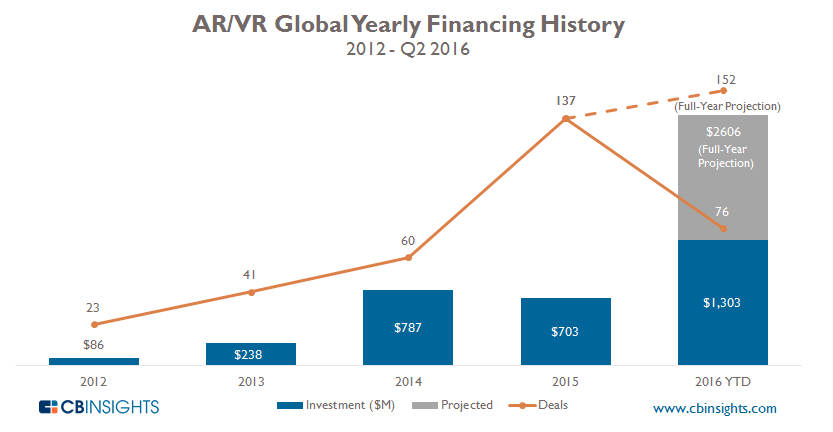 Drilling into the quarterly trend, however, indicates a slight wane in activity in Q2’16. Deal volume fell from 44 to 32, a 27% drop quarter-over-quarter. Despite that, AR/VR funding totaled $205M in the absence of a Magic Leap mega-round, which is comparable to totals seen at the end of 2015. 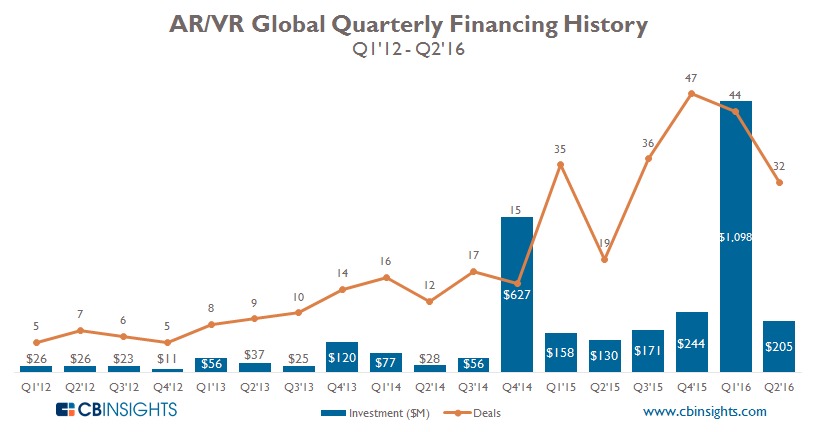