Asian eCommerce companies continue to pull in staggering amounts of money, with nearly $2B already raised across 75 deals in just the first 6 weeks of 2015.

Remember when we said Asia eCommerce was the hottest industry in the world? Looks like we have some more data to back that statement up.

Investors continue to pour money into these companies, as there have already been 10 $100M+ equity financings to Asian eCommerce companies in the first 6 weeks of 2015. Asian eCommerce companies have raised $1.9B already this year on 75 equity deals. In comparison, the 6 weeks of 2015 is already larger than all of Q1’14’s activity, and comparable to US eCommerce funding, which has raised $2.4B on 74 equity financings this year.

In fact, at its current pace, Q1’15 will see the most deals in the past four years in Asian eCommerce companies, and the second largest quarter for funding in the same time period. 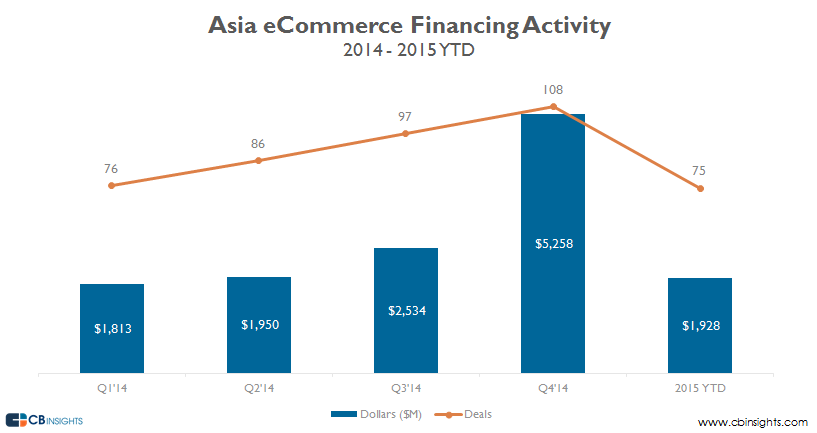 The slew of $100M financings this year have largely been concentrated in China, with Clues Network, a multi-product Indian eCommerce marketplace serving mostly smaller cities, being the only eCommerce company outside of China to raise a nine-figure round in 2015.

Ele.me is the biggest round thus far this year, as the food-ordering site raised a $350M Series E from Sequoia Capital China, Tencent, CITIC Capital PE, and Jingdong, among others. The participation from Tencent comes as its rival Alibaba has already made an investment in Meituan, who ramped up its food delivery operations last year.

Wanda e-commerce has raised the second most this year, across two rounds totaling $260M including a $160M PE financing that valued the company at $3.2B less than 6 months after the companies launch.

Want more data around Asian eCommerce startups? Check out our 2014 Asian eCommerce research brief. You can also see the underlying data by logging into CB Insights or signing up for free below.