Research Brief
1970
Asian corporations are pumping hundreds of millions into US mobile gaming. China's Tencent has backed Pocket Gems, Playdots, and Plain Vanilla Games, among others.

Asian internet and telecom giants including Alibaba and Tencent are participating in billions of dollars worth of transactions across the US private tech landscape. Mobile gaming is one industry where they’ve played an outsize role in startup funding.

Overall, since the start of 2010, US-based mobile gaming startups have raised $946M across more than 210 deals, according to CB Insights data. But even as funding sees some strong quarters, deal flow is fairly flat: 2014 saw just a 9% rise in deal activity compared to the previous year, and in 2015 year-to-date deal flow has fallen off from late 2014 levels. As we’ll detail below, it turns out individual large deals involving Asian corporates are behind the quarterly funding spikes.

The chart below highlights the quarterly funding and deal trend to U.S. mobile gaming firms.

Note: Zynga, which started as a social gaming company and raised large financings in 2010 and 2011, is not represented in the data. 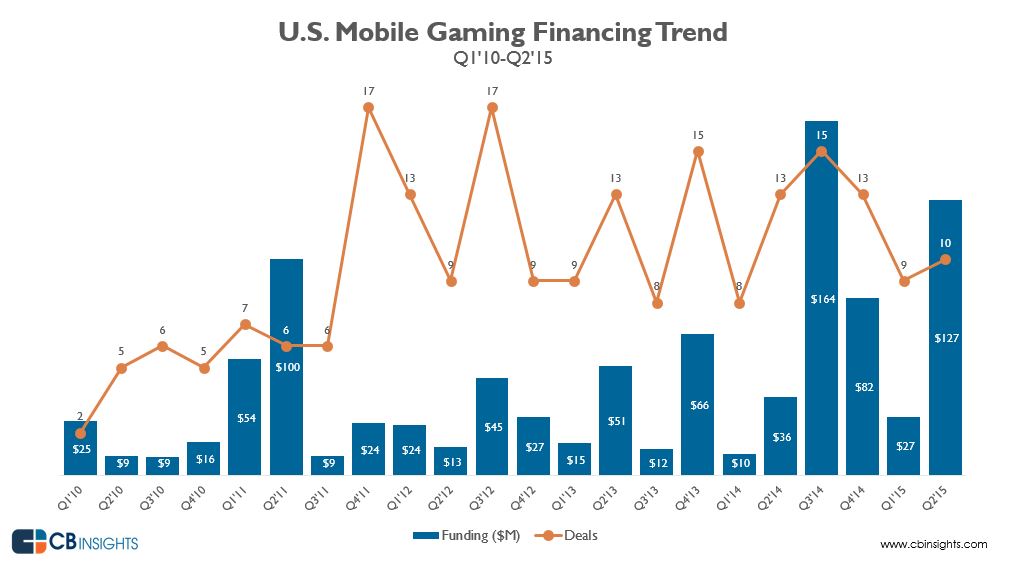 Peeling back the funding data reveals the disproportionate influence of Asian corporates, which have propped up the two largest quarters in the last five years by total funding. In Q3’14, Alibaba invested $120M into San Francisco-based game developer Kabam at a $1B valuation. That deal accounted for three-fourths of the quarterly funding total. And in Q2’15, Tencent took a $60M minority stake in Sequoia-backed game studio Pocket Gems, driving nearly half of the funding to US mobile gaming in the quarter. In fact, Tencent is the second-most active investor (including VC and non-VC investors) in unique US mobile gaming companies over the last five years (behind 500 Startups). Other corporate investors include Japanese gaming companies, Nexon and DeNA.

The chart below highlights the range of mobile game startups that received Asian corporate backing over the last several years. As US gaming studios including Storm8 and Machine Zone rack up big revenue numbers, are more strategic Asian investments on the way?

Looking for more gaming financing and exit data? Check out the CB Insights Venture Capital Database. Sign up free below.