Research Brief
1745
Corporations in Asia made 600 investments into tech companies in 2014, compared to just 384 the year before.

Tencent, a Chinese investment-holding company, has been the most active investor since 2010, with more than 60 tech investments. Samsung Ventures came in second place, with under 50 investments including Pure Storage and SolidFire. CyberAgent Ventures, the venture arm of media giant CyberAgent, was the only other investor with investments in more than 40 tech companies.

In terms of overall deal flow, Asian corporates made 600 investments into companies in 2014, compared to 384 the year before, a 56% increase. By quarter, there has been a slow upward trend since 2010, with a peak of 189 global tech investments reached in Q3’14. These corporates  have played a role in prominent deals focused on US tech companies (Snapchat, Uber, Lyft), but the percentage of their deals made in the US has actually been decreasing over time, and comprised less than 25% of total deals in 2014 (compared to 54% in 2010). 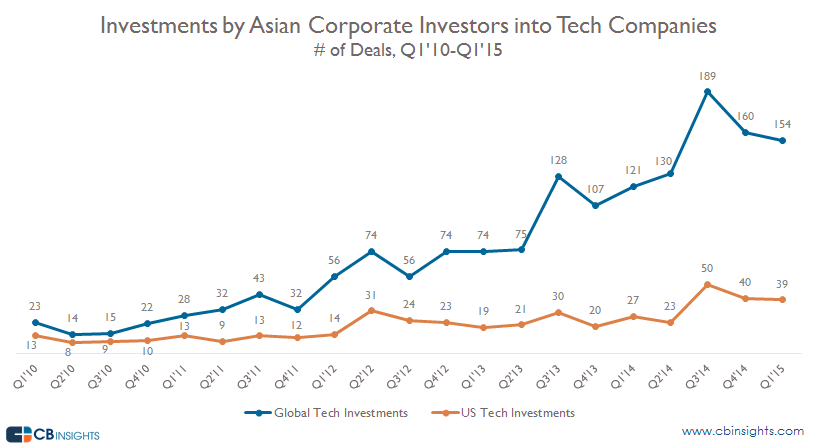 These Asia-based corporates are primarily focused on making early-stage investments, with nearly half of total investments being made at the Seed and Series A level. Mid-stage investments accounted for over a quarter of tech deals, and late-stage investments for less than 10%. 15% of tech transactions came in the form of Corporate Minority rounds, with corporations taking large stakes in companies and forming strong partnerships. 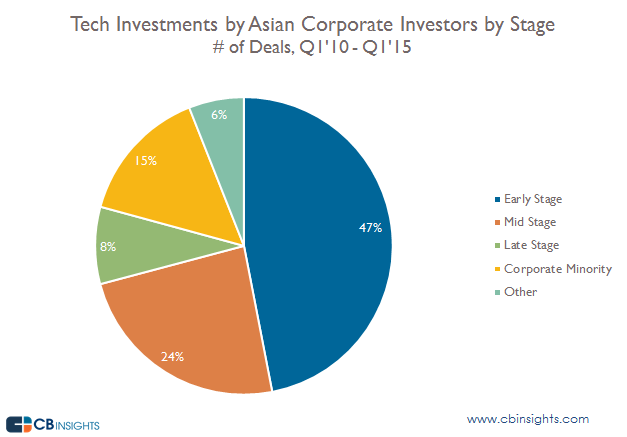 Want more data on corporate investment? Check out our venture capital database below.