Corporate players are fueling innovation in the Asia tech ecosystem, participating in 40% of deal share in the space in Q1'17.

As the Asia technology ecosystem grows, corporate venture players are taking on a bigger role in private markets. In Q1’17, corporates participated in 125 deals across $6.6B in funding, more than any quarter in 2016.

Corporates also increased their share of participation in deals to tech startups in Asia significantly, reaching 40% of deal share in Q1’17 compared to 31% in the previous quarter.

Using the CB Insights database, we highlighted the top corporate investors in the region in the past year and analyzed how these 12 players are fueling innovation in the Asia tech ecosystem and where they’re focusing their investments. 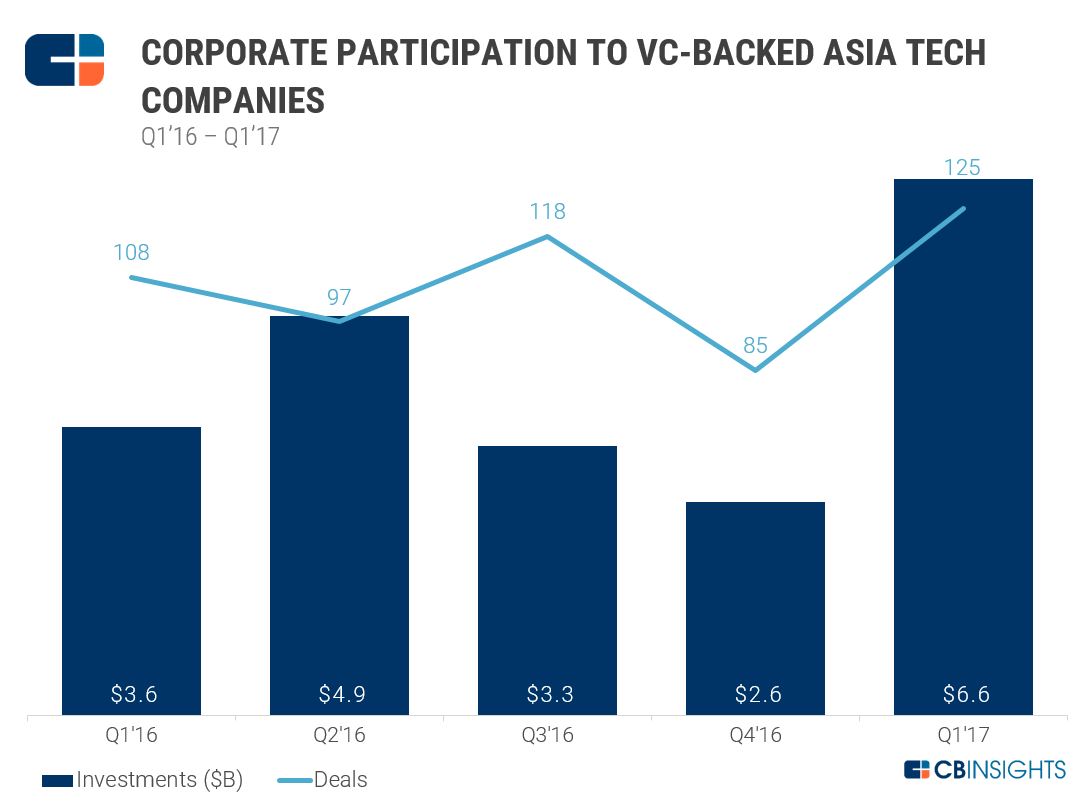 Chinese internet giant Tencent Holdings is the most active corporate investor in Asian technology startups, making over 30 total investments to VC-backed tech companies in Asia since Q1’16. Most of Tencent’s investments in Asia over the five quarters preceding Q2’17 went to startups based in China, with deal activity almost exclusively focused on mobile or internet software/services and e-commerce businesses.

Tencent counts a whopping 19 of the 60+ total Asia-tech unicorns in its portfolio – far and away the most of any corporate investor in the region – and made four unique investments in Asia tech unicorns in Q1’17 alone, participating in follow-on rounds to China-based bike-sharing startup Mobike and Q&A site Zhihu, as well as India-based Flipkart’s $1.4B Series J, participating alongside corporate investors eBay and Microsoft. (Tencent also made a third investment in Mobike in June.) Other notable recent tech deals include participation in Kuaishou’s $350M Series D, and online medical association firm Hao Daifu’s $200M Series D.

Prior to January 2015, Tokyo-based SBI Investment – the venture arm of SBI Group’s asset management business – had made about 10 portfolio investments globally since 2000. Since Q1’16, however, the firm has become a highly active investor in Asia, participating in at least 18 deals to tech companies in the region through Q1’17.

SBI shows a strong preference for investing in its fellow Japanese companies, many of them early-stage, with all but four of its Asia-tech deals since Q1’16 going to Japan-based firms. One notable exception is the firm’s $30M investment in Seoul-based Yello Mobile, an umbrella company that acquires mobile startups, in Q1’16. (The deal is SBI’s only unicorn investment over the five-quarter period.) SBI invested in five Japan-based tech startups in Q1’17, including participating in Japan-based digital health startup CureApp’s $3.4M Series A and IoT data platform aptpod’s $5.8M Series A.

CyberAgent Ventures is an offshoot of Tokyo-based CyberAgent, a publicly traded internet advertising and social gaming company. The venture arm says it primarily makes investments in early-stage Asian internet businesses with global expansion potential, with a preference for companies at the seed-stage: More than half of its investments in Asian tech companies from Q1’16 to Q1’17 went to companies at the seed stage.

CyberAgent made just one investment in Q1’17, a follow-on in Japan-based restaurant-website developer Favy’s $3M Series A. Notable investments over 2016 included participation in a $2.25M Series B to HarukaEdu, an Indonesia-based provider of online education solutions, and a $4.2M seed round to NIDA Rooms, a travel e-commerce site.

An offshoot of The Times Group, India’s largest media conglomerate, Brand Capital makes “brand building” investments in mobile, internet software, and e-commerce businesses. Brand Capital’s investments in Asia tech from Q1’16 to Q1’17 all went to India-based companies, including a $25M Series A to Meru Cab Company, a “radio taxi” company moving into inter-city ride-sharing, and participation in a $6M Series A to MyGlamm, a marketplace for on-demand salon services. Brand Capital co-invested alongside corporate investor L’Occitane in the MyGlamm deal.

Brand Capital counts a $20M convertible note investment in Indian unicorn Quikr, an e-commerce site specializing in online classifieds, among its Q3’16 deals. But given that Quikr had already raised beyond Series H, the late-stage investment is a highly unusual one for Brand Capital’s portfolio; all of the firm’s other Asia tech investments over the five quarters preceding Q2’17 went to companies at the seed or Series A stages.

SMBC Venture Capital is the investment arm of Tokyo-based Sumitomo Mitsui Banking Corp. The firm is tied with Brand Capital with at least a dozen Asia tech investments from Q1’16 through Q1’17, but SMBC’s deal activity over the five quarters went entirely to Japan-based startups with deal activity roughly even across all investment stages from seed to Series D.

The largest deals SMBC participated in over the five-quarter period were an $87.6M Series D to SmartNews, a news discovery app; a $14.4M Series B to WealthNavi, a cloud-based asset management and robo-advisory service; and a $19.9M Series C to BASE, an e-commerce platform. Fellow Japan-based corporate investor CyberAgent Ventures and SBI Investment also count BASE among their portfolio companies.

The most active US-based corporate investing in Asia Tech, Qualcomm Ventures (QCV) was formed and began funding deals in 2000 with a $500M fund for strategic investments in technology ventures, with a stated emphasis on the mobile/wireless opportunities. The firm made more than 10 investments in Asian tech startups from Q1’16 to Q1’17, with at least 5 deals in India, 4 in China, and 2 in South Korea.

QCV was founded with a focus on early-stage deals, but its activity in Asia over the five quarters preceding Q2’17 included two late-stage rounds: The firm participated in a $10M Series E to Borqs International, a China-based IoT device maker, in Q1’17 and made two follow-on investments in Indian mobile app distributor AppsDaily Solutions – participating in a $2M bridge in Q3’16 and a $3.75M Series D in Q4’16. Zodius Capital and Kalaari Capital invested alongside QVC in both of those AppsDaily rounds.

The Asia tech deals made by Legend Capital from Q1’16 to Q1’17 went to nine Chinese companies, all in rounds totaling $12M or higher. The recent additions to the firm’s Asia tech portfolio companies are mobile and internet software/services businesses serving a range of markets from transportation to food/beverage: Its largest deals over the five-quarter period preceding Q2’17 included participation in a $260M Series D round to Innovent Biologics, a biopharmaceutical company, and a $100M Series A to AtourHoutel, an operator of boutique hotels throughout China.

Legend was also the only investor in a $19M Series B round to Bangsun Technology, a financial risk technology startup, in Q3’16. Legend then made a follow-on investment in Bangsun in May alongside corporate investor F&G Venture, among others.

Nissay Capital, the venture arm of Nippon Life Insurance Company, is an active investor in B2B and B2C IT companies as well as medical/healthcare and manufacturing startups. The firm has also shown an interest in e-commerce, making a follow-on investment in Tokyo-based LaFabric’s Series B round in Q1’17.

Fosun Kinzon Capital funds technology companies in both Asia and the US, with a focus on “mobile internet” companies serving a variety of different industries ranging from fintech to digital health. Its Asia tech deals from Q1’16 through Q1’17 all went to China-based startups.

Fosun’s portfolio activity in Asia over the five-quarter period includes several search-related platforms and marketplaces. The firm made a follow-on investment in a Series B round for Xishan Information Technology – which operates Datebao.com, a discount insurance e-tailer – in Q3’16 and participated in the Series A for Zhugefang, an online real estate search platform, in Q1’17. It is also a two-time investor in Shanghai Molbase Technology, a B2B e-commerce site where people around the world connect to buy and sell chemical compounds and custom chemicals; Fosun first invested in the company’s Series C round in Q1’16 and made a follow-on investment this past May.

Bertelsmann Asia Investments (BAI) advertises an exclusive interest in China-based companies, but about half of the company’s technology investments from Q1’16 to Q1’17 included deals outside China.

Two of those investments took place in Q3’16, in which BAI participated in a $45M Series A to Hong Kong-based DotC United, a mobile application developer, as well as a $20M Series B to Indonesia-based Baca, a news and information discovery service. The third was a Series C to Singapore-based Bigo Live, a social video streaming app.

Search engine company Baidu is earning a reputation as the Chinese Google, and its investments in Asian internet, mobile software, and artificial intelligence startups reflect that. Baidu financed two Chinese AI startups in Q1’17 alone: The firm participated in a $10M Series A to Shumei Technology, which uses artificial intelligence and big data for fraud detection, and a $600M Series D round to NIO (formerly NextEV), a manufacturer of autonomous vehicles powered by an “artificial intelligence engine.” NIO was valued at $2.89B following the Baidu deal.

In addition to those financings, Baidu made at least four other investments in Asia tech startups – all based in China – between Q1’16 and Q1’17. One was in Beijing-based unicorn HomeLink, an online real estate brokerage; Baidu invested alongside Tencent and others in HomeLink’s $872M Series B in Q2’16.

Rounding out our list is YJ Capital, the venture arm of Yahoo! Japan, which made at least four investments in Japan and two in Singapore over the five-quarter period preceding Q2’17. The firm’s deal activity in Asia tech included two internet-related companies: YJ participated in a $32.8M Series A to Japan-based BizReach, an executive job-search site, in Q1’16, and a $10M Series C to Singapore-based Paktor, a dating app that is a major rival to Tinder in Asia, in Q3’16. (Paktor has since merged with Taiwanese startup 17 Media.)

Two of its investments in the region also related to logistics and delivery: YJ Capital participated in the $30M Series B round for Singapore-based Ninja Van, which offers next day deliveries for e-commerce companies, as well as a seed round to Tokyo-based Dely, an early-stage entrant in the recently troubled food delivery space.

Want more intel on Asian technology startups? Log in to CB Insights or sign up for free below.