Analyzing the median time between rounds for Seed and Series A startups helps to surface some of the hottest emerging tech companies in Asia.

Asia-based tech companies continue to raise huge rounds of financing, specifically within the hottest industry in the world, eCommerce. This momentum in large financing rounds caused us to look at whether or not this momentum translated to a faster early-stage pace between rounds. The results were mixed.

Asian tech startups are actually taking a longer time on a median basis to go from Seed to Series A, reaching a three-year high in 2014 at 427 days (~14 months). However, the median time between Series A and B rounds in 2014 fell YoY from 484 days in 2013 to 440 days in 2014. This could be due to the increase in later-stage investors like Tiger Global moving upstream in 2015. Regardless, Asian Tech startups are still raising at a faster rate than European Tech companies. 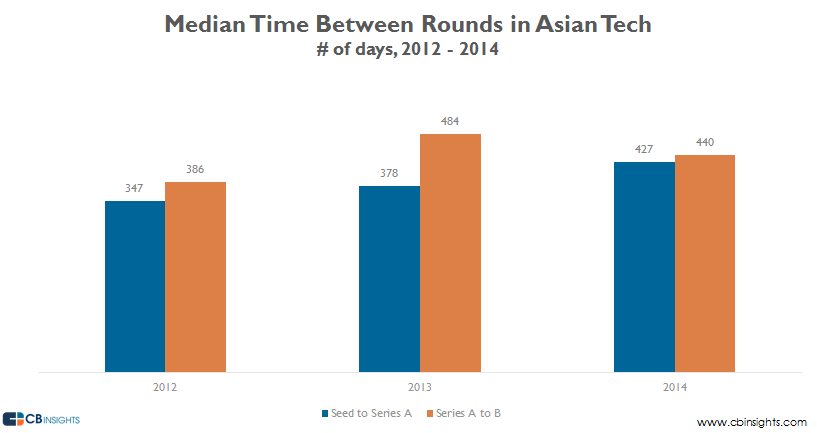 We used CB Insights data to surface some of the hottest and fastest-raising Series A stage companies. These companies all went from Seed to Series A in less than 250 days and raised their last round of financing since 2014. The list includes the Postmates of India, Grofers, which raised a $10M Series A from Sequoia Capital and Tiger Global Management less than 4 months after raising a $500k seed round, as well as Yetang, a China-based apparel eCommerce site for independent designers, which raised $5M from Doll Capital Management in December 2014, less than 8 months after raising a Seed round from IDG Capital Partners.

In addition to looking at fast-raising Series A stage companies, we also looked at the Series B stage companies which made the leap from A to B the quickest since 2014. This list of companies contains some of the hottest early to mid-stage tech companies in Asia. The highlighted companies include GoGoVan, a Hong Kong-based e-hailing company that raised $10M at a $100M valuation in November 2014, as well as Chuizi Technology, a China-based company that hopes to emulate Xiaomi, the world’s most valuable private venture-backed company, with its “Smartisan” Android OS and hardware. Chuizi Technology raised a $24M Series B in March 2014 at a $160M valuation less than 5 months after raising an $11.5M Series A from Buttonwood Capital which valued the company at $77.5M.

Want more data around Asia’s hottest tech startups? Login to CB Insights or sign up for free below.