Research Brief
3580
Eight of the 15 Asia-Pacific countries featured in our map have at least one startup that has raised $100M+.

Asia is the earth’s largest and most populous continent. Nearly one-third of the world’s private “unicorn” companies that are valued at $1B+, are headquartered there, 52 unicorn companies total. China holds the most, with over two-thirds (71%) of the continent’s billion-dollar startups.

Now, the tech boom is diffusing across Asia and Oceania; startups outside of the established hotbeds for technology and innovation are raising vast sums of money.

Using CB Insights data, we analyzed the most well-funded tech startups in the Asia-Pacific region by country based on disclosed equity funding. We excluded debt funding and only considered VC-backed companies that have raised at least $1M of equity funding to date. Every country included on the map has at least one startup with $1M+ in equity funding, and every company featured has raised equity funding since 2012.

Eight of the 15 Asia-Pacific countries featured in our map have at least one startup that has raised $100M+, and 6 Asian countries on the map have seen at least one unicorn birth.

After China’s 37 unicorns, India has the second most with eight. Other countries with startups valued at $1B+ include: South Korea (Coupang, CJ Games, Yello Mobile), Singapore (Grab, Garena Online), Japan (Mercari), and Indonesia (Go-JEK).

Countries whose top five most well-funded VC-backed tech startups that did not have a combined total of $3M+ in equity funding were excluded. With these criteria for selection, some countries did not make the map—including Mongolia, Timor-Leste, and others. The least well-funded startup on the map is in Bangladesh: the on-demand grocery delivery platform Chaldal, with $120K in equity funding in a seed round from Y Combinator. The most well-funded tech startup in Asia is China’s Didi Chuxing, which has raised $8.6B and is valued at $33.8B.

See the infographic below. The full list of startups is included at the end of this post.

To look up each startup’s funding totals, financing details, investors, and momentum, sign up today for a free trial of our startup and venture capital database. 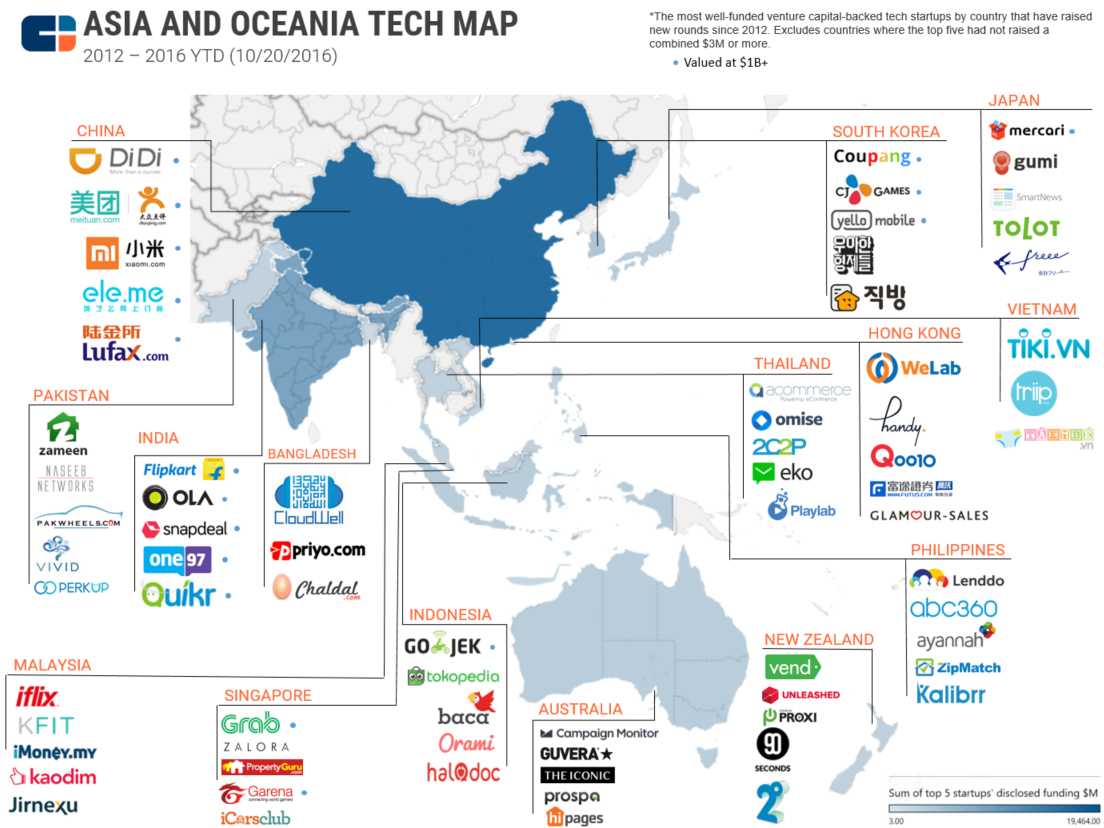 Want more data on Asian and Oceanic tech startups? Log in to CB Insights or sign up for free below.