2014 was an absolutely massive year for eCommerce in Asia as companies in the region raised $11.5B across 367 equity financings last year. The boom in financing activity was driven by a number of $100 million+ rounds, as well as five $500M+ financings to Asia Unicorns such as Flipkart and Snapdeal. 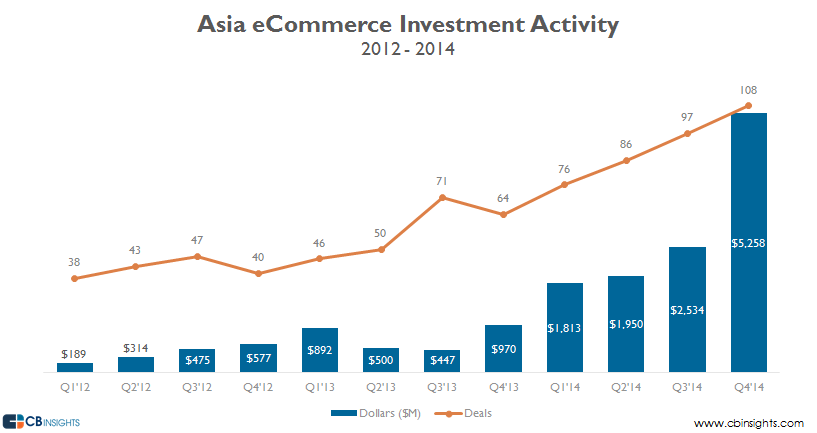 There were over 120 equity investments made into Chinese eCommerce companies in 2014, accounting for 34% of all deals into the Asian eCommerce space. India saw the second highest tally of deals, as the only other country with over 100 investments in the year. Japan and Singapore followed in terms of deals, while South Korea saw the fifth most deals, and the third highest total funding, largely due to the $400M that Coupang raised across its Series C and D rounds from investors such as Sequoia Capital, Wellington Management, and Founder Collective.

The full geographic breakdown is below. 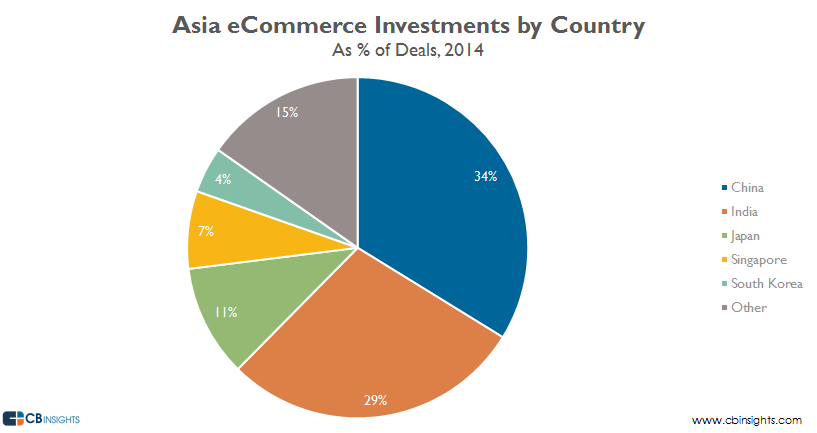 While later-stage deals made headlines in 2014, the majority of investments came in at the early-stage (Angel – Series A). 37% of all deals were in mid to late-stage financings. Overall, there were over 200 early-stage financings to Asian eCommerce companies in 2014, the highest total in the past 3 years, a sign that we may just be at the beginning of this industry’s boom. 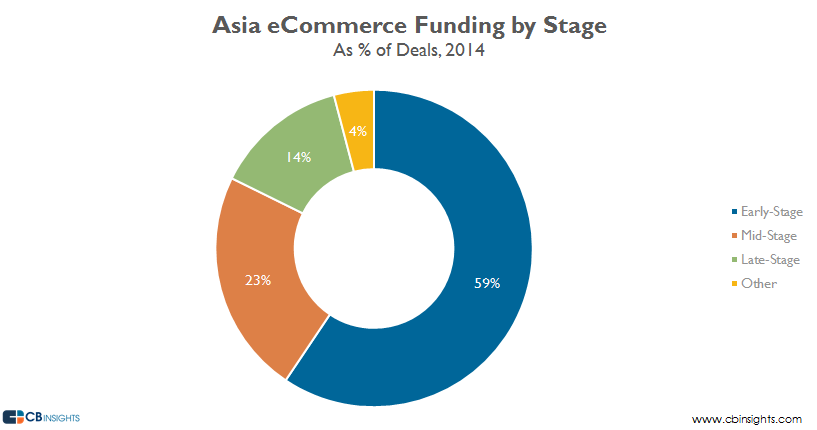 The top 20 deals in Asian eCommerce companies in 2014 raised over $7.2B cumulatively, with India’s answer to Amazon, Flipkart, accounting for 2 of the top 5 deals. These deals made made up $1.7B of the $1.9B the company raised last year across three rounds. Interestingly, when looking at the top deals, Tiger Global is everywhere having participated in 7 of the top 20 (5 of which were in the top 10) largest deals, including all three Flipkart financings, as well as investments in Uber alternative Kaudi Dache, Koudai Gouwu, Youxinpai, and Beijing Feixiangren IT, the owner of Ganji.com.

Sequoia Capital China is Most Active

Sequoia Capital China was the most active investor in Asian eCommerce companies in 2014, investing in over 15 unique companies last year. The active year comes after Sequoia had raised a $530M fund to invest in Asia. Their most notable investment was in Meituan’s $700M Series D which valued the “Groupon of China” at $7B. IDG Capital Partners was second, investing in over 12 unique companies in 2014, including social commerce site Mogujie’s $200M Series D which valued the company at $1B. East Ventures, SAIF Partners, and the previously-mentioned Tiger Global (who raised $2.5B in 2014 to invest in venture financings) rounded out the top 5 all with over 10 unique company investments in 2014.

Want to track financing and exit data on Asian eCommerce companies? Login to CB Insights or sign up for a free trial below.