Research Brief
2912
The majority of the startups were acquired within 4 years of their first financing. Google emerges as the top acquirer of AI companies.

As we’ve mentioned, corporate giants in tech are competing to acquire private artificial intelligence startups, with Google emerging as the most active acquirer over the last 5 years. So far in 2016, there have already been over 20 acquisitions of AI startups, the most recent being Twitter’s acquisition of visual-processing startup Magic Pony Technology.

We analyzed M&A and IPO activity in this space from 2011. Our artificial intelligence category includes companies developing core AI algorithms as well as those applying AI solutions to specific industries like healthcare and cybersecurity.

We used our database to analyze at what stage the AI companies exited. Most of the startups were acquired within 4 years of initial funding, as seen in the graph below. To name a few, Vocal IQ, a spin-out from the University of Cambridge, raised a seed round in June 2014 and was acquired in 2015 by Apple; AI-based messaging startup Emu was acquired by Google within a year of seed funding; Wit.ai was acquired by Facebook in 2015 after the startup raised two seed rounds the previous year; Salesforce acquired Series A stage smart-calendar startup Tempo AI last year.

The outlier late-stage exit in the graph below (14 years after first funding) is Nexidia’s acquisitions by NICE Systems.

M&A activity was up from just 5 transactions in 2011 to over 35 in 2015. Google, IBM and Apple made 2 acquisitions each last year. Amazon and Salesforce joined the race with the acquisition of Orbeus and Tempo AI, respectively. 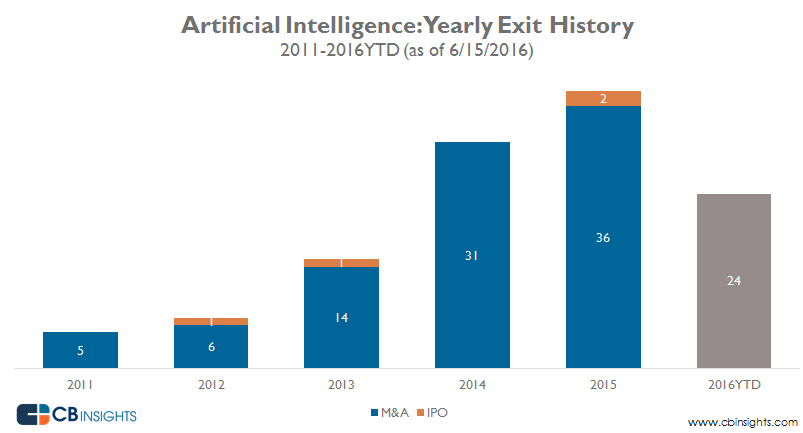 Google is ahead of everyone else in the race, with nearly 10 acquisitions under its belt since 2011. Twitter ranked second with acquisitions including Magic Pony, Madbits, Whetlab and TellApart.

Apple and Salesforce joined the race last year and have acquired 3 AI-focused startups each since then.

Our research brief detailing the timeline of major acquisitions shows how the race is heating up among the top acquirers listed below.