Historically, Apple has used M&A as a tool to enrich its dominant product of the day, with its focus over time shifting from its computer to its smartphone.

For example, FaceID, the technology that allows users to unlock their iPhone X just by looking at it, stems from Apple’s M&A moves in chips and computer vision, including acquisitions of companies like PrimeSense, RealFace, and Faceshift.

Using CB Insights M&A data, we made a visual timeline of the largest acquisitions in the company’s history. 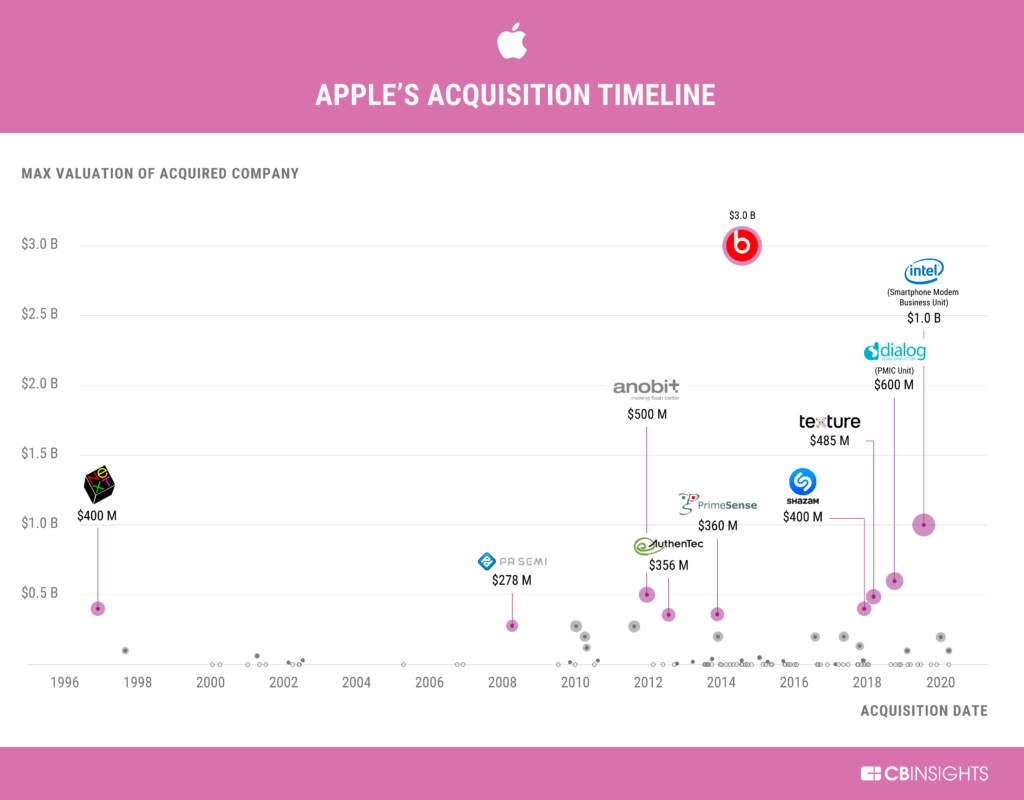 2. Intel’s smartphone modem business ($1B, 2019) is Apple’s most recent acquisition to make the top 10 list. The deal brought in critical engineering talent and patents, ramping up Apple’s push to develop modem chips for its 5G phones.

3. Dialog Semiconductor ($600M, 2018) is a UK-based semiconductor business. Apple expanded its chip operations in Europe by acquiring the chip supplier’s battery management business, taking on an engineering team that already had many years of experience working on chips for Apple devices.

4. Anobit Technologies ($500M, 2011), an Israel-based semiconductor startup, was acquired by Apple for its flash memory components, a key part of many of Apple’s products, as well as for its large team of chip engineers.

5. Texture ($485M, 2018), a digital newsstand app, was acquired by Apple to bolster its publishing and news services. The service was shut down a few months following the launch of Apple News+ in March 2019.

6. Shazam ($400M, 2017), the popular song identification app, was reportedly seen by Apple as a “natural fit” with its Apple Music streaming service.

6. NeXT Computer ($400M, 1996), a software development company, is the earliest of Apple’s top 10 acquisitions and was used to bring Steve Jobs back into the company he co-founded.

8. PrimeSense ($360M, 2013) is an Israeli 3D sensing company that was used to power Microsoft’s Kinect. It is now also behind Apple’s facial recognition technology included in the iPhone X.

10. PA Semi ($278M, 2008) was Apple’s first acquisition of a semiconductor company. One of the reported reasons for acquiring the California-based chip designer was Apple’s interest in low-power processors for mobile devices.