Apple's acquisitions reveal an interest in AR-related tech that was made explicit in the latest WWDC conference.

Yesterday, Apple kicked off its WWDC developers’ conference with an announcement of a suite of tools for developers which will allow them to create augmented reality apps for the iPhone. Apple executives boasted this will effectively make the company the largest AR platform in the world.

A look at Apple’s acquisition timeline shows how several M&A targets helped set up the company to be a player in AR. There is also a distinct uptick in the number of acquisitions that have happened in the last few years, compared to pre-2014. Most recently, Apple has been particularly active in making AI acquisitions, spanning speech recognition, computer vision, and facial recognition.

Computer vision capacity is also key to building AR apps. In addition, the company has also made acquisitions in the dedicated AR/VR space, including the purchases of FlyBy Media and metaio.

Below is a snapshot of the activity from our platform. CB Insights clients can see the line by line details for Apple’s M&A with this deal search. 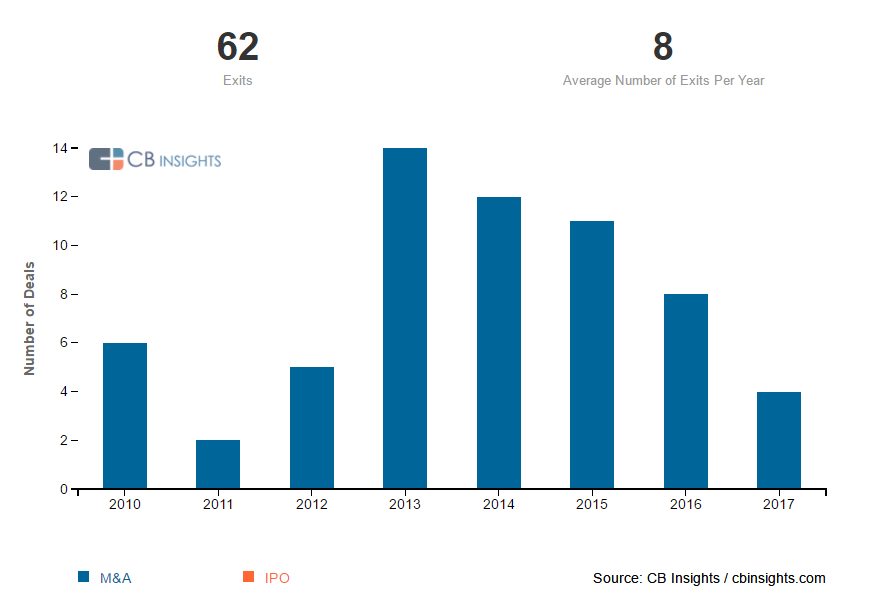 Since 2010, most of Apple’s acquisitions have been of Series A companies, including FoundationDB, Cue, and Catch.com. Apple’s largest acquisition was Beats for $3B in 2014, but the company has made a total of 11 acquisitions with disclosed valuations above $100M since 2010. Others include Anobit Technologies and PrimeSense. Madrona Venture Group has had the most portfolio companies acquired by Apple, including Lattice Data, Turi, and Union Bay Networks.

Thematically, Apple has invested in several areas including:

Want more data on what Apple is doing? Check out our database or sign up below.