Research Brief
3947
We looked at AppDynamics private market valuation history prior to the $3.7B Cisco deal. The company was last valued at $1.9B in the private markets.

Yesterday, Cisco Systems announced it would acquire enterprise software company AppDynamics for $3.7B. We used CB Insights’ valuation data to look at the company’s fundraising and valuation history to date.

AppDynamics had raised $414.5M in total funding through its purchase date (1/24/17). It had most recently raised $158M in a Series F financing at a $1.88B valuation, in October of 2015. This means, at a price tag of $3.7B, Cisco paid roughly twice the company’s highest valuation in private markets.

Charted below, we identified each of AppDynamics’ valuations and valuation changes, beginning with its $5.5M Series A in 2008, led by Greylock Partners and Lightspeed Venture Partners.

Both Greylock Partners and Lightspeed Venture Partners participated in every subsequent equity funding round (excluding a mezzanine debt round from Silicon Valley Partners); amounting to five follow-on rounds through AppDynamics’ 2015 Series F financing. 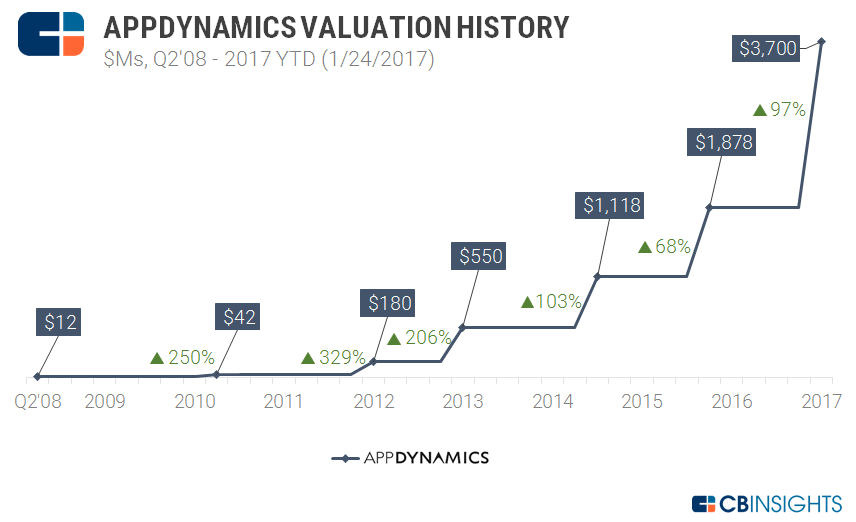 *Cisco has announced its intention to acquire AppDynamics. The $3.7B price, while agreed upon by both parties, is technically the offer price until the deal is complete.