Research Brief
1845
In the $4.4B acquisition of AOL, what types of companies will Verizon be picking up in the deal?

As the “You’ve Got Mail” era comes to a close with the $4.4B acquisition of AOL by Verizon, the fate of some of AOL’s acquired companies & associated technologies is uncertain. Conventional wisdom has suggested that this move is to strengthen Verizon’s reach into mobile/video advertising, but that only represents one aspect of AOL’s business and the businesses it has acquired.

The adtech/mobile theory is in-line with Verizon’s investment strategy, which shifted towards investing more heavily in both of these sectors. Prior to Q3 2011, Verizon Ventures investment into ad-tech was negligible, but from the second half of 2011 to the past quarter, ad tech has taken the second most funding as the heatmap from Investor Analytics highlights below.  Some adtech companies that Verizon Ventures has invested in include RUN and AdTheorent, both of which are focused on mobile.

So what ad tech capabilities is Verizon picking up via its acquisition of AOL?  Since 2008 AOL has acquired companies mostly in the Adtech/Marketing and Social spaces. Alongside acquisitions of video and content management startups, AOL has pulled together enough companies to make it a dominant player in the online ad market space (including mobile). 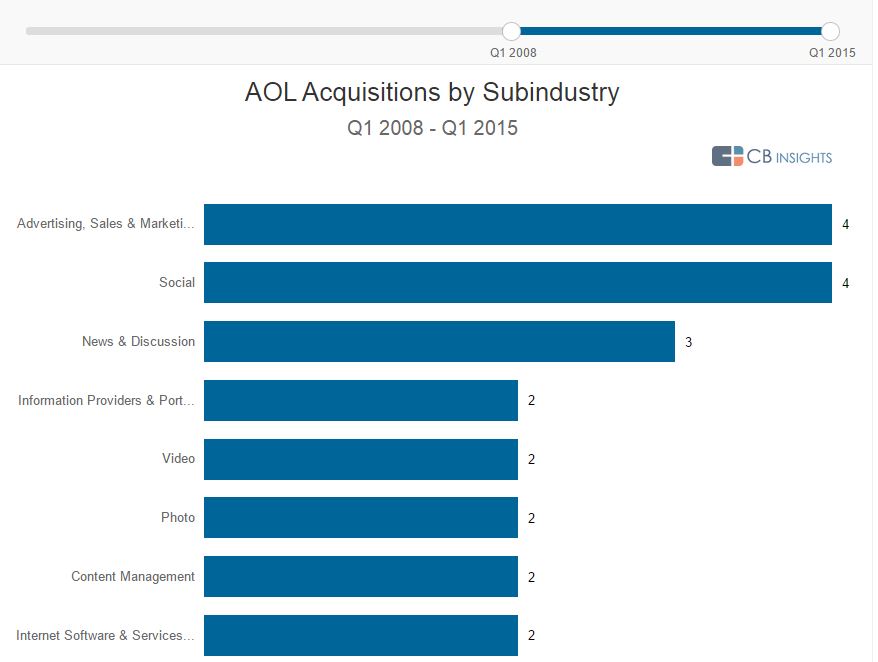 If the acquisition is based mostly on the mobile/video/adtech, then the biggest question is what will happen to the other services/startups that AOL has recently acquired. Social, AOL’s second biggest area of focus, which includes the acquisition of companies like Thing Labs and SocialThing (which joined other AOL teams), could provide Verizon with usable data to better target ads.

However, since Verizon has made it clear that it is not a “content company”, the content production startups that AOL has acquired are in a more precarious spot.  This includes familiar names like TechCrunch, Huffington Post, and Engadget.  While it’s unclear what Verizon/AOL plan to do with those entities, the mobile/video/adtech startups that AOL brings to Verizon will likely be of interest to Verizon.

Want to understand Verizon Ventures investments and AOL’s acquisition history? Sign up for our venture capital database below.