Research Brief
1709
Angels are losing some of their prominence in tech investing. Is their declining share due to the rise of micro VCs?

When it comes to non-VC investors, angels participate in the most US tech deals, while other, less traditional investors reached their highest participation rate in the past 5 years in 2014.

CB Insights data previously told us that rounds VCs accounted for only 49% of all US Tech deals, but what’s going on with the non-VCs?

The chart below shows that angel investors (both individuals and angel groups) participate in the highest % of US tech deals of all non-VCs, at 27% in 2014, down 4% from 2013, and the lowest figure since 2011. The decrease could possibly be due to the rise of micro-VCs and these funds crowding angels out of very early-stage deals.

We recently have seen increased activity for a select group of hedge and mutual funds investing in tech, however overall institutional investor participation is actually down versus 2010 and 2011. Alternatively, corporations have stepped up their activity over the past two years, participating in 7% of all US Tech deals in 2013 and 2014. Other less traditional investors which include universities, endowments, governments, and more, increased to 5% of all US tech deals in 2014, a five-year high.

The full data below. 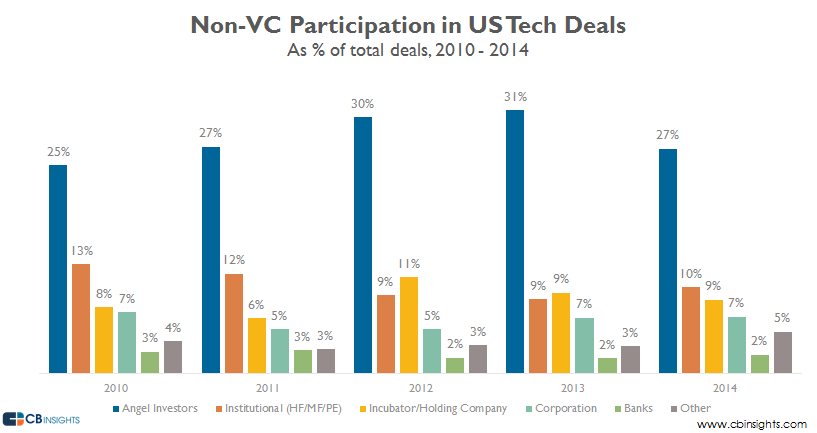 Want to track VCs and non-VC financing activity into private tech companies? Login to CB Insights or sign up for free below.