Traditional retailers like Albertsons, Walmart, and Target are clambering to acquire delivery-focused tech startups in the grocery race against Amazon.

Just as many suspected (or in the case of some retailers, feared), Amazon will start delivering Whole Foods groceries through its two-hour Prime Now delivery service. For now the service will only be available to Amazon Prime members in limited cities, though the company plans to roll out the offering across the US later this year.

The announcement follows widespread speculation that Amazon’s purchase of Whole Foods would help the e-commerce giant crack the code to affordable grocery delivery, a major concern for traditional grocery retailers in the US.

Since the $13.7B Amazon-Whole Foods deal in June 2017, big-name American retailers like Albertsons, Walmart, and Target have been arming themselves against Amazon through tech acquisitions.

Delivery startups Plated and Parcel (purchased by Albertsons and Walmart, respectively) were acquired only a few months after the Whole Foods deal, while Target acquired Shipt — which it will now use to facilitate same-day delivery — as recently as December 2017. 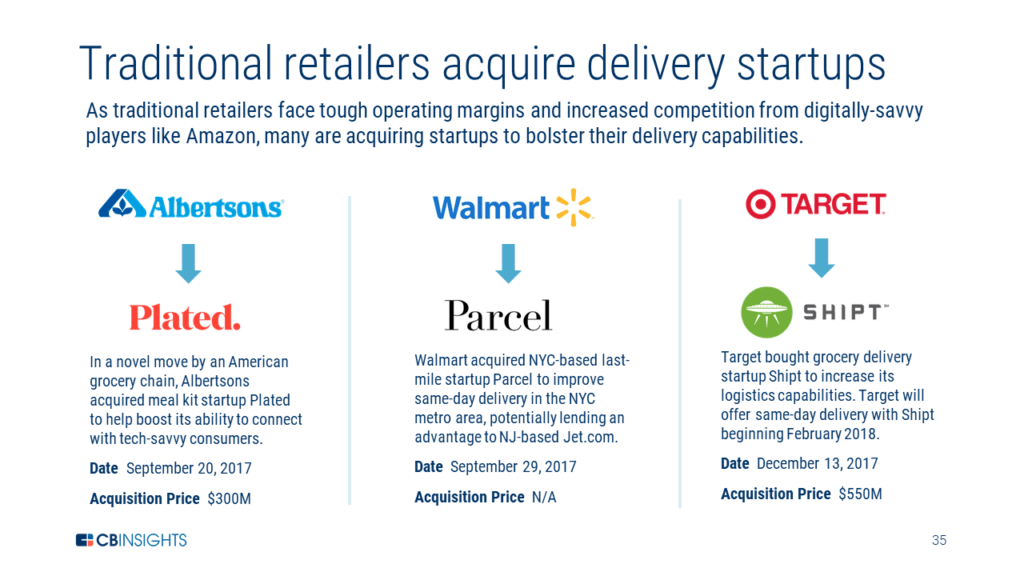 Some established retailers, like Albertsons and Target, already offer or plan to offer some form of day-of delivery — but Amazon’s announcement will likely further spur these players to offer the speediest delivery services that they can logistically and operationally handle.

Beyond affecting traditional grocers, the announcement also puts pressure on CPG retailers to improve operations, with big names like Coca-Cola and Unilever investing in and acquiring logistics-focused startups to improve their delivery capabilities to stay competitive.