Amazon announced this morning that it plans to buy major national grocer Whole Foods for $13.7B – acquiring the supermarket chain’s 460 stores and 18 million square feet of retail space in North America and the UK.

While there was was some speculation about the deal in April, the acquisition — and its price tag — still came as a surprise to many. Even as Amazon continues to reach its tentacles across areas as diverse as cloud computing, AI, healthcare and media, its interest in logistics and distribution and improving the speed and efficiency of its delivery network has only increased.


Ultimately, the Whole Foods deal also aligns with what most observers see as Amazon’s true quest: Total retail domination. As investors and retail industry experts respond to the acquisition news, we rounded up reactions and what experts think it means for the future of retail and e-commerce. Here’s are the best perspectives we’ve come across so far.

In predicting the Whole Foods takeover last month, L2 founder Scott Galloway pointed out that Amazon could close the stores down and just use them as warehouses (and still hypothetically justify the price).

Between Amazon’s grocery delivery ambitions and its new access to physical space, many, such as Dennis Berman of the Wall Street Journal, noted how much bigger Amazon’s distribution engine becomes following this acquisition. 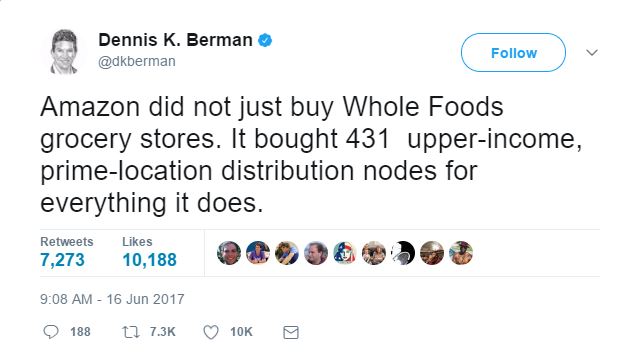 No matter how Amazon opts to utilize its new space over the long-term, Mark Cuban says one one question would determine whether the e-commerce giant’s purchase was a smart one. 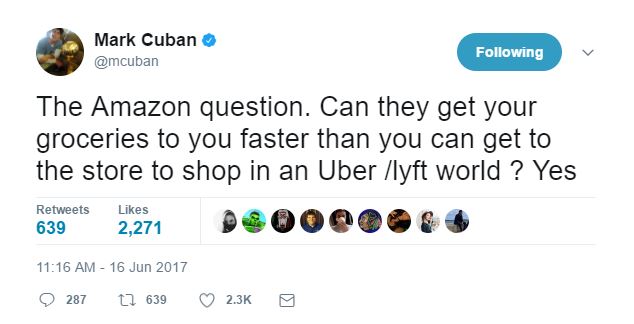 Scott Crowe, Chief Investment Strategist of CenterSquare Investment Management, says Amazon’s purchase of Whole Foods’ real estate portfolio shows how much value there can be for e-commerce businesses in physical retail space — but only if it’s the most high-value physical real estate.

“You’ve had the biggest disruptor of physical retail real estate now make a multi-billion dollar investment in physical locations and what it shows you is there is a huge synergy to be had between e-commerce and physical stores, but only for the very best real estate locations.”

Others are talking about just how deep this sends Amazon into the food business. CNBC writer Anita Balakrishnan called the acquisition “a blow to Blue Apron’s IPO plans,” while Jim Cramer said it’s a “game-changer” for the entire food industry.

“This is a threat to everybody who sells food because you can’t compete. Amazon–they will not let you compete.”

Kim Forrest of Fort Pitt Capital Group and others agree that traditional supermarkets should be very worried. (A concern that sent grocery stocks tumbling in light of the Amazon-Whole Foods news.)

“It has not been a particularly good decade for them because of deflation. Look at Kroger’s results and it tells you about the deflation….

“Amazon is going to deliver. This is the thing they’ve been missing, an ability to get fresh food closer to people. Whole Foods is everywhere Amazon wants to be in cities where people spend money.”

“At least as it relates to groceries, we now have an answer that Amazon is serious. And when Amazon is serious, frankly there is no limit to what they can do in terms of disrupting the space… essentially relegating everything that currently exists in the business obsolete.”
–David Tawil, President, Maglan Capital

Amazon vs. Walmart vs. Alibaba

In light of today’s other big retail-acquisition news — Walmart’s acquisition of Bonobos — Loose Threads founder Richie Siegel was one of several to contrast the giants’ competing strategies. Siegel referred to the matchup as “chess versus checkers.”

Walmart’s acquisition spree in the consumer space has earned the company a lot of press recently. The speed of these acquisitions is a bet that buying companies, brands and talent is the only way for Walmart to catch up to Amazon, its biggest rival.

Amazon’s buy versus build strategy is much different than Walmart’s. The company notoriously tries to build as much as it can in house, experimenting with projects and developing expertise over a five to seven year time horizon that’s a signature of CEO Jeff Bezos.

Walmart will likely continue buying brands and retailers in the consumer space. Amazon likely will not.

“It certainly is very disruptive for Wal-Mart and Target and some others, and I think that’s causing the decline today. Wal-Mart is a big food seller and so the Amazon news is significant because it could be a game changer in terms of how the food industry operates. But it may be an overreaction here because Wal-Mart customers are very different from Whole Foods’ customers. So I think (the move) is overdone in probably both Wal-Mart and Target.”

“On average, the price on Amazon is cheaper, if not the same, than on Wal-Mart,” GGV Capital managing partner Hans Tung told CNBC.

One of the lingering issues for Whole Foods is its inability to market en masse due to its higher pricing. The hope for Whole Foods’ shareholders, according to Tung, is that Amazon’s investment will push the grocer to become more mass market.

“It will be interesting to see which way Amazon gets Whole Foods to move: more high end, more ‘techy’ or more mass market? That’s the $13 billion question,” Tung said.

Others compared Amazon’s move into the realm of brick-and-mortar stores to the “New Retail” strategy recently deployed by Alibaba.

[Amazon and Alibaba] are both making moves into the brick-and-mortar space because their access to large troves of data and their fulfillment abilities allow them to provide for a better customer experience in physical stores.

“This deal is a total validation of our strategy,” Alibaba Head of External Affairs Brion Tingler told TheStreet.

But as LinkedIn CEO Jeff Weiner points out, reactions to any of Amazon’s strategic moves are always seen as visionary and brilliant. 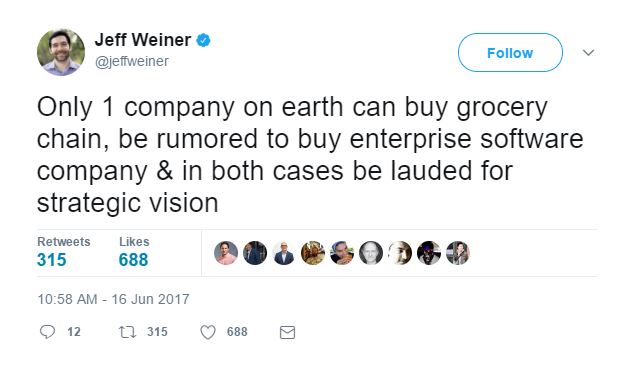 Want to learn more on startups and investors? Log in to CB Insights or sign up for free below.