We visualize Amazon's top acquisitions, from high-impact strategic moves, such as buying Whole Foods, to acquisitions that fell flat, like Quidsi.

Amazon has traditionally been a conservative buyer. Despite the historic Whole Foods mega-acquisition ($13.7B) — as well as a few big-name purchases like shoe retailer Zappos ($1.2B, 2009) and smart doorbell system Ring ($1.2B, 2018) — on the whole Amazon has historically been far less prone to acquisitions than its tech giant rivals.

But the tide could be turning. In 2017, Amazon made a record 11 acquisitions, while in 2019 YTD it’s already made 5 acquisitions — matching its total acquisitions for FY 2018.

Using CB Insights M&A data, we made a visual timeline of the largest acquisitions in the company’s history. See a list of the top 10 below. 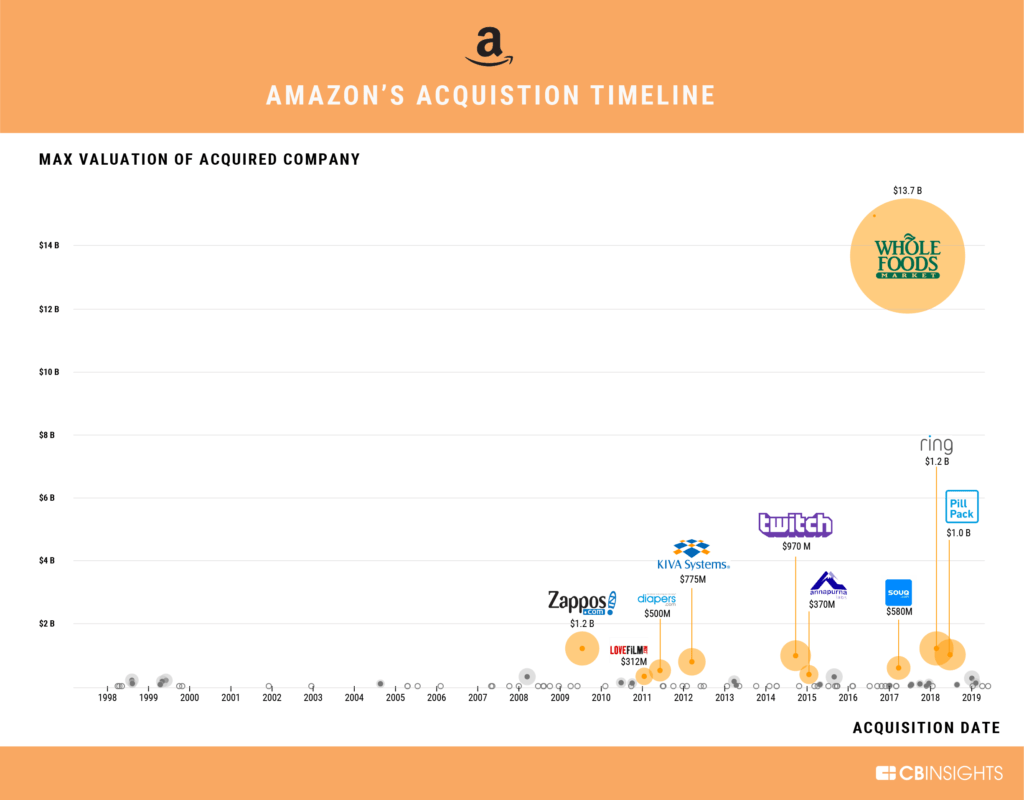 1. Whole Foods ($13.7B, 2017) dwarfs Amazon’s second-largest acquisition by more than 10x. The acquisition dramatically expanded Amazon’s brick-and-mortar footprint, as well as giving Amazon a much stronger position in grocery delivery that capitalizes on Whole Foods’ large and loyal customer base.

2. Ring ($1.2B, 2018) is a Wi-Fi-enabled doorbell that streams live video of a home’s doorstep to a smartphone or tablet. The acquisition helped strengthen Amazon’s smart home offerings, and literally opened the door for Amazon couriers to leave packages inside customers’ houses.

3. Zappos ($1.2B, 2009) was Amazon’s first $1B+ acquisition. Known for its unique culture and customer-centric ethos, Zappos fit neatly with Jeff Bezos’ relentless customer-focused approach and brought an online competitor into the Amazon fold.

4. PillPack ($1B, 2018), the most recent of Amazon’s 10 largest acquisitions, notably confirmed Amazon’s long-rumored entry in healthcare. The markets reacted accordingly, with share prices for several incumbent pharma companies diving nearly 10% on the news.

5. Twitch Interactive ($970M, 2014) is a video game platform and community. The deal raised eyebrows at the time, but Amazon has since capitalized on Twitch’s fiercely loyal fan base to gain a competitive advantage as major tech companies zero in on cloud-based gaming as a big emerging market.

6. Kiva Systems ($775M, 2012), a robotic fulfillment system manufacturer, was the one of Amazon’s most impactful acquisitions to its long-term business — no e-commerce competitor has yet been able to rival Amazon’s warehouse automation.

8. Quidsi ($500M, 2011), the parent company of Diapers.com, was one of Amazon’s largest acquisitions at the time. Just a few years after the deal, Quidsi co-founder and co-CEO Marc Lore left to launch Jet.com, which Walmart subsequently acquired for $3.3B in 2016. Amazon ultimately shut down Quidsi in 2017, citing profitability concerns.

10. LOVEFiLM International ($312M, 2011) represented one of Amazon’s earlier forays into content streaming, back when the DVDs-by-mail model was still robust and online streaming was only beginning to achieve widespread popularity. Six years later, with DVD rentals all but extinct, Amazon shuttered the company.

The Promise Of Artificial Intelligence In Clinical Trials