By December 2014, venture-backed alternative lenders OnDeck Capital and Lending Club had gone public on the NYSE. By 2015, equity funding to the alternative lending industry had hit an all-time high, with private companies including SoFi, Avant, and Kabbage receiving a collective $6.3B from investors.

In the following two years, however, momentum in the space slowed: 2017 saw the highest number of acquisitions, mergers, and shutdowns in the sector to date, while a formal crackdown in China aimed to reduce the thousands of players operating in the country’s sector.

So where does that leave the state of alternative lending today?

In this post, we analyze how regulation, consolidation, and exits have impacted the alternative lending sector — and what to expect moving forward. 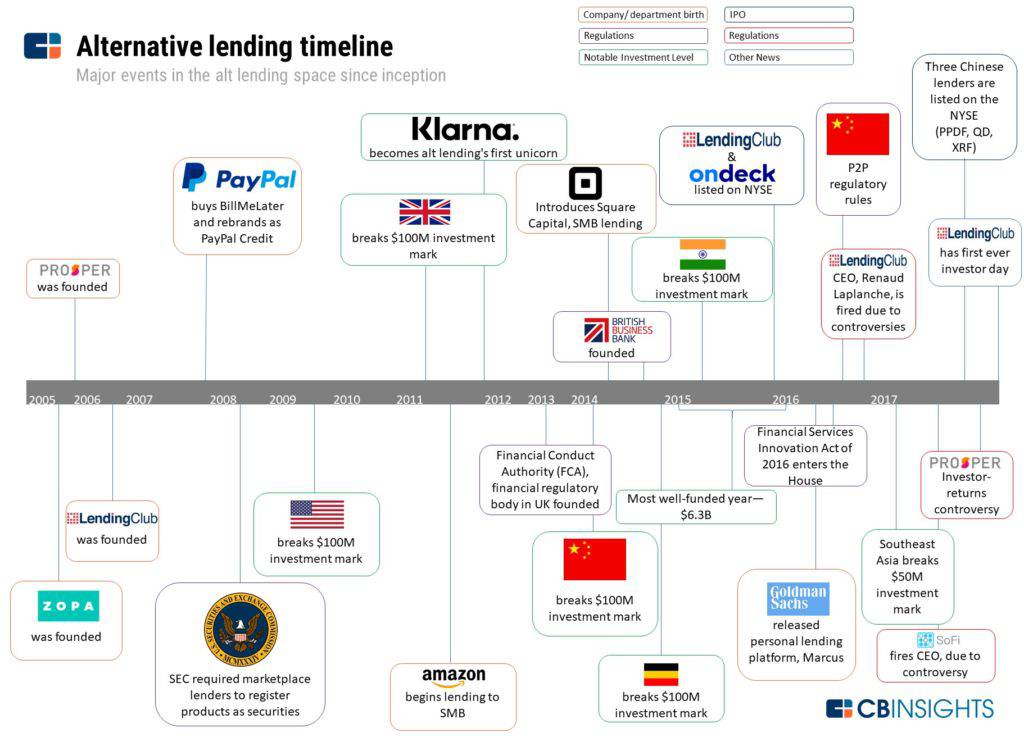 Companies involved in the application, underwriting, or funding processes around alternative means for obtaining a loan for personal or business use.

As the relatively unregulated alternative lending industry continues to grow in loan volume, regulators are starting to pay attention. Below, we look at of some of the major regulatory moves to date across major markets.

The US has taken a largely reactive regulatory approach to alternative lending, attempting to apply existing rules and regulations to the emerging field.

Rather than a single rule-making body tasked with monitoring and regulating the alternative lending space, regulation comes through a collection of federal agencies.

The Consumer Financial Protection Bureau (CFPB) is the federal agency in charge of regulation for all consumer-based financial products. 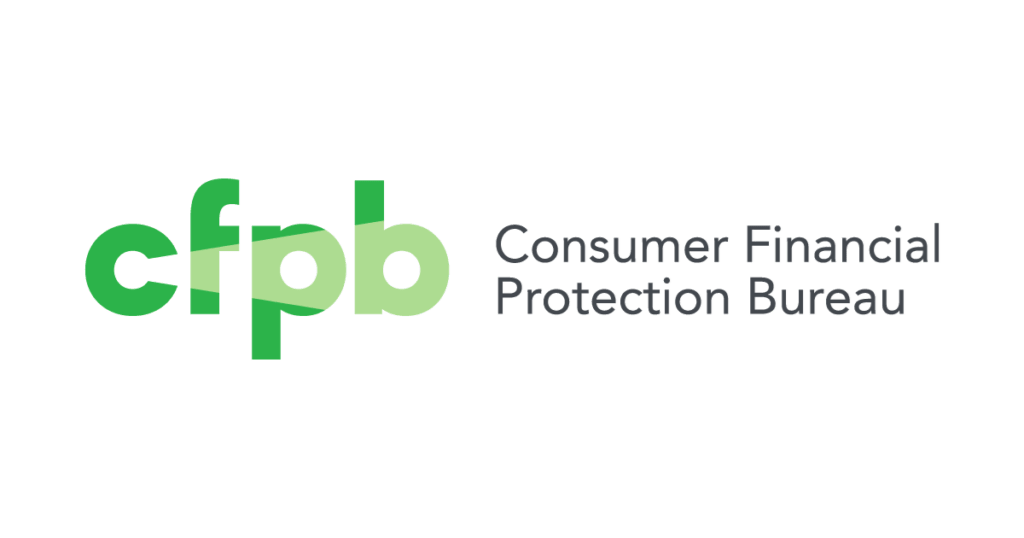 In October 2017, the CFPB finalized a rule aimed at payday lenders, requiring them to determine upfront whether consumers can afford to repay loans via credit checks on CFPB registered systems. This rule covered all loans that require consumers to repay all or most of the debt at once, including payday loans, auto title loans, deposit advance products, and longer-term loans with balloon payments.

While these restrictions are unlikely to affect any major alternative lending company operating now, they prevent startups from creating payday lending companies.

Congressman Patrick McHenry proposed sandbox regulation in September 2016 as part of a new bill, the Financial Services Innovation Act of 2016 (H.R. 6118.), which still remains in the House.

If passed, fintech companies would be required to demonstrate to regulatory agencies that their innovations serve the public interest, improve access to financial products and services, and do not impose undue risk to consumers or the financial system.

If approved, companies would receive a license to operate under an agreement that waives or modifies regulation that is out-of-date or unduly burdensome.

This rule would involve multiple agencies, including the Federal Reserve Board, the Treasury Department, and the Securities and Exchange Commission, which would each be required to set up a Financial Services Innovation Office in compliance with the new rule.

This bill would give fintech companies a level of federal certainty, but its future remains uncertain, given the Trump administration’s intentions to roll back financial regulations and the introduction of Financial Choice Bill.

The Chinese peer-to-peer lending industry started off as largely unregulated, and it was not until outstanding P2P loans reached $200B RMB in July 2015 that a regulatory framework began to materialize.

This framework had three main takeaways:

In 2016, regulators ordered local governments to survey alternative lending companies in their districts to better understand what type of regulation was needed. Following this, some major cities stopped registering new firms and employed harsher rules on advertisements.

In 2017, China’s central government began a formal crackdown on the industry, by then estimated to be worth $1T RMB with thousands of active participants. The first step was suspending approval for new internet micro-lenders and no longer approving micro-loan firms lending across regions.

With the online cash-lending sector projected to reach $2.3T RMB by 2020, more regulation by the Chinese government could still be down the line. 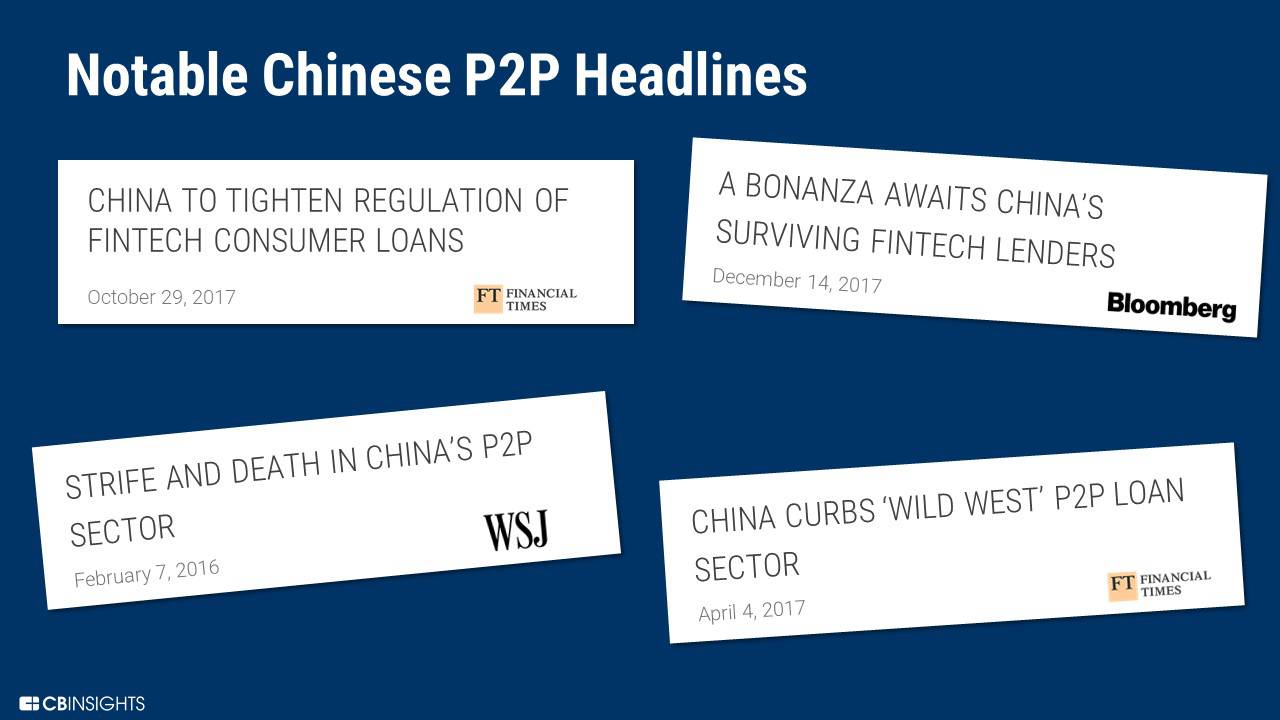 The UK government has been deliberate in its plan to foster innovation, especially in fintech. This lead to the creation of the British Business Bank (BBB) and the Financial Conduct Authority (FCA).

The BBB, founded in 2014, is a state-owned economic development bank. The goal of the organization is to increase the supply of credit to small and medium business, provide business advice services, and ultimately harbor innovation.

Operated by the UK government, the FCA is the rule-making financial regulator body. The FCA operates through a regulatory sandbox, allowing new entrants to prove concepts over time.

The FCA is responsible for all new regulations, such as required submission of quarterly data on origination, loan stocks, costs, and defaults.

The total market size of alternative lending in the UK is relatively small at about $4.5B, and loans to small businesses have overtaken consumer loans.

The alternative lending industry has recently experienced consolidation, with a wave of acquisitions, mergers, and shutdowns taking place in the space. In fact, 2017 saw the most consolidation over the last seven years.

In Q2’17, mortgage tech company Sindeo called it quits, laying off 61 of its 70 employees after failing to receive a necessary funding round. Three weeks after the layoffs, Sindeo investor Renren, one of the most active Chinese investors in US fintech companies, acquired the company.

In Q4’17, Earnest, a data science personal lending company, was acquired by Navient, the country’s largest loan servicer focusing on collecting payments on student debt, for $155M. Earnest’s co-founders continue to run the brand as a separate unit.

Last month, Victory Park Capital purchased a majority stake in Borro, a luxury asset-backed lending company. After providing a credit facility in February, VPC will grow its involvement to include working capital financing plus strategic and operational support. Prior to the deal, Borro raised $226M in total disclosed funding.

Also in December, Goldman Sachs acquired a majority share in FinanceIt, by way of a recapitalization. The Toronto-based company is a point-of-sale financier that offers a platform aimed at helping merchants increase closing rates and transaction sizes by providing installment plans to customers. 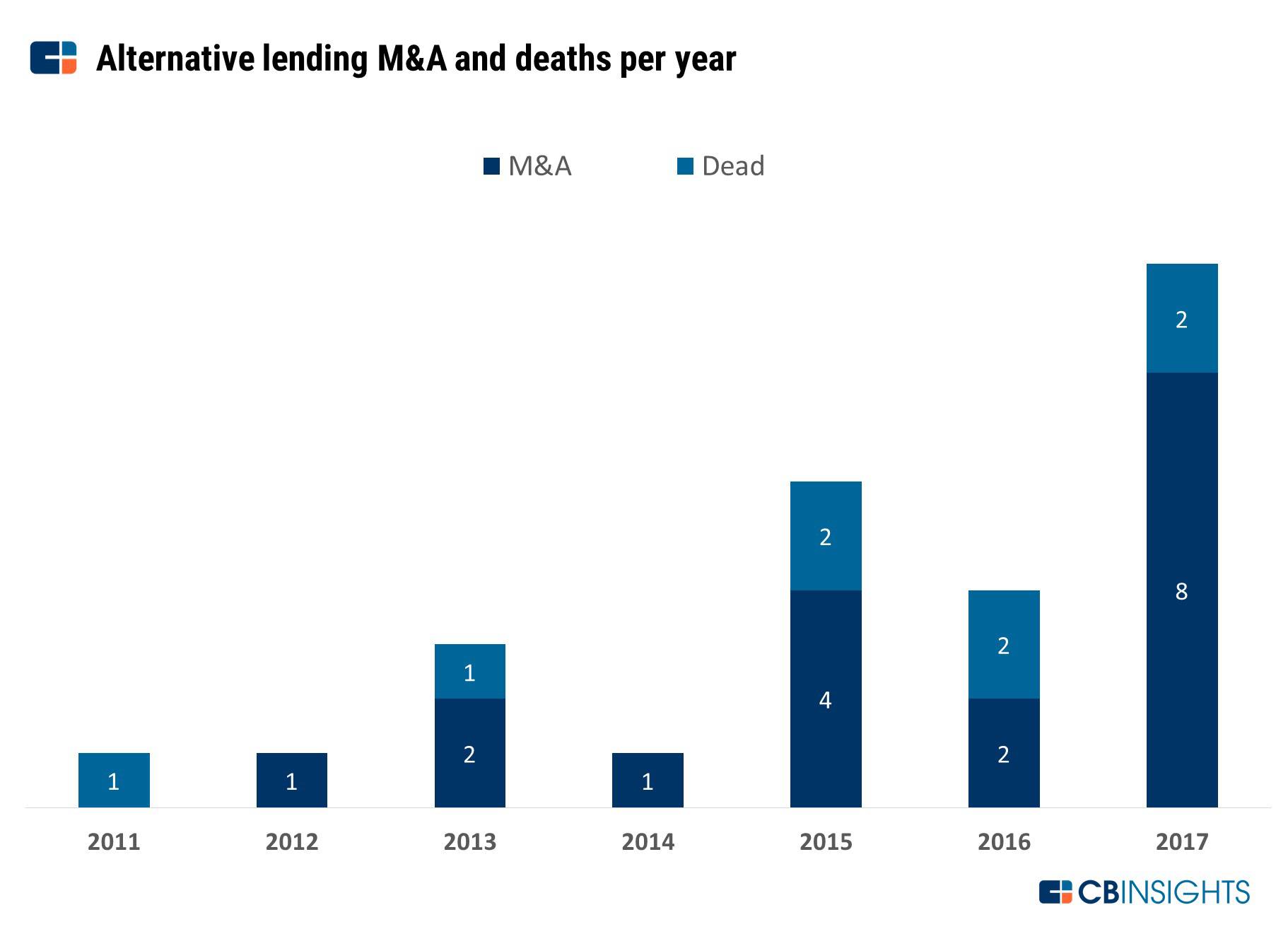 Two other US-based search brokers have also gone public on on other exchanges: LendingTree (on NASDAQ) and Credible Labs (on AU). Credible raised $50M on the Australian Securities Exchange, in the exchange’s largest tech offering of 2017.

Valuations for four of these companies — Lending Club, OnDeck Capital, PPDAI Group, and Qudian — have fallen over 40% since their IPOs.

However, the other six have traded up following their public offerings, and all US-listed shares have outpaced S&P 500 returns over that time. 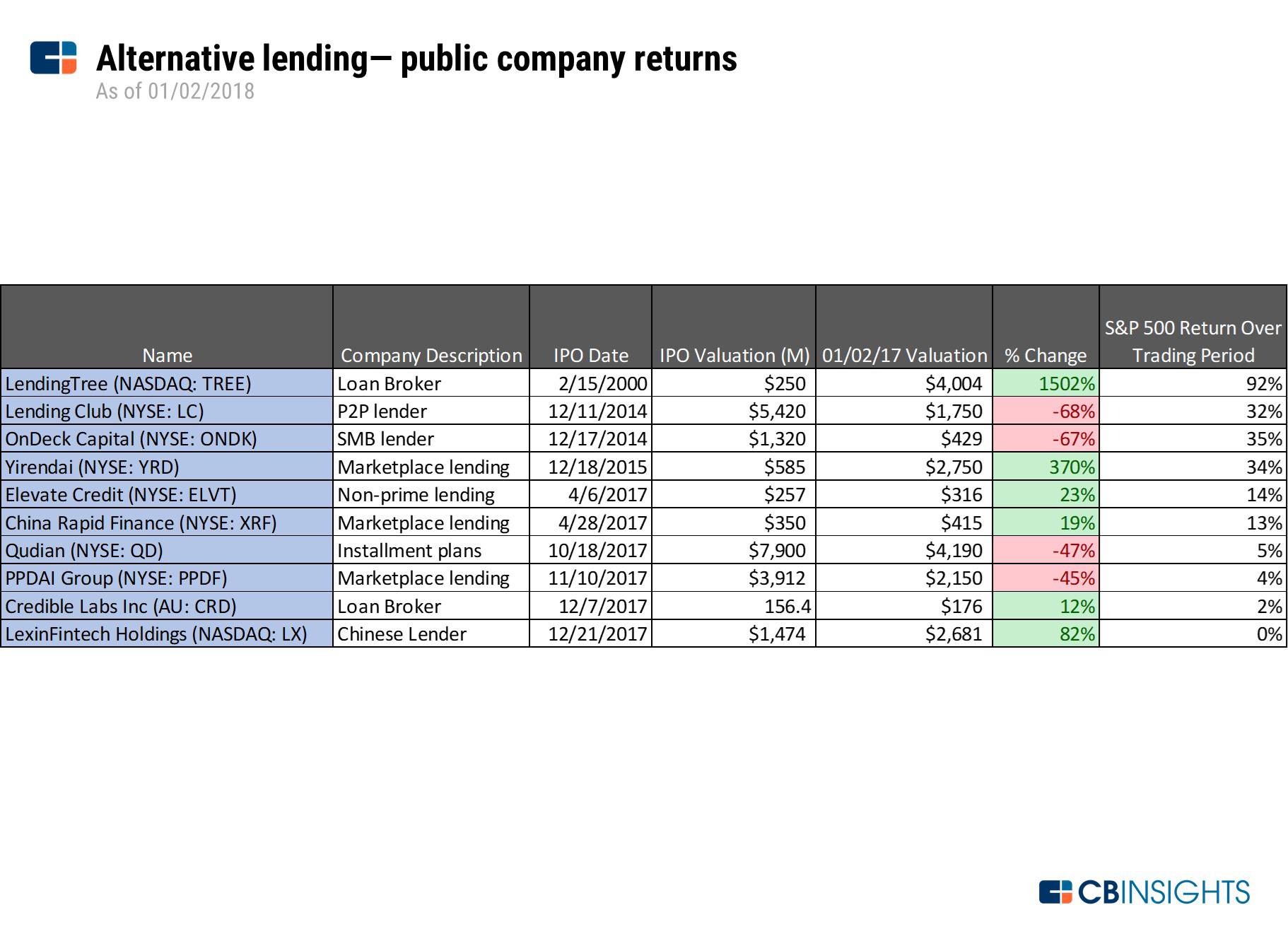 After a significant period of unbundling in finance that led to companies focusing on mastering a single product line, companies may begin to look to expand their financial product offerings going forward.