China's alternative lending space has recently been plagued with uncertainty, corruption, and overcrowding. This has investors and startups looking to other areas in Asia, especially those with large unbanked populations.

There are a couple of reasons why Southeast Asia and India are primed for alternative lending investment: In particular, they have large unbanked populations and fast-rising internet penetration.

Southeast Asia, for example, has more than 150M adults 25+ years old that are completely unbanked, according to a recent study from Google and Temasek, and a credit system that makes it impossible for millions of people to obtain reasonably priced credit.

We used the CB Insights platform to analyze the shift in alternative lending investment across Asia and the factors driving this shift.

Alternative lending is a term we describe broadly to encompass loan products offered by non-financial institutions to meet the needs of consumers and businesses.

Why alt lending deals are shifting out of China 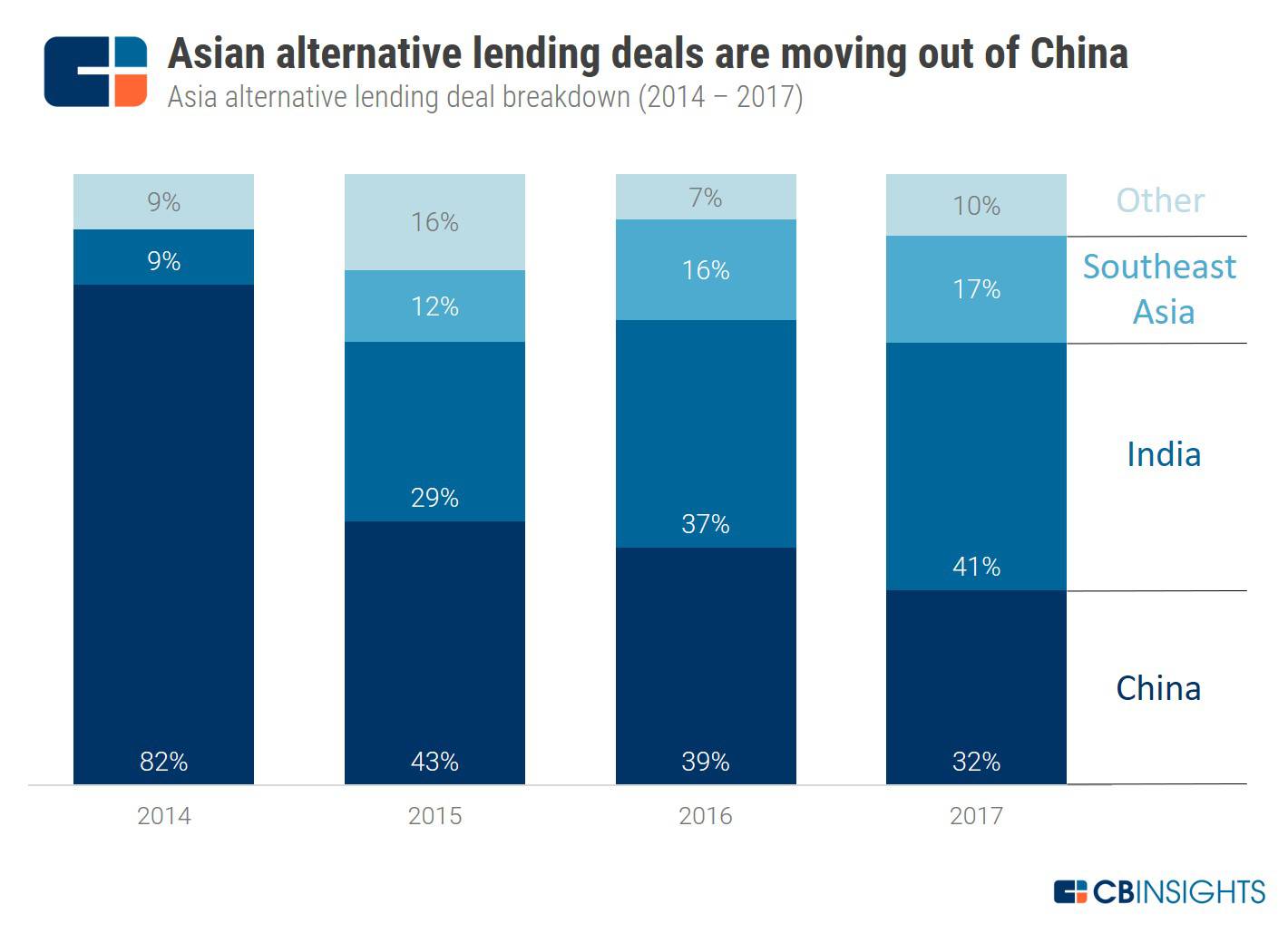 China’s alternative lending market has seen its share of Asian deals shrink year-over-year since 2014. This has been driven by oversaturation, regulation, and brighter oppurtunities elsewhere in Asia.

Recent developments in India and Southeast Asia, including India’s financial inclusion campaign, called Jan Dhan Yojana, and Indonesia’s clarification of P2P lending rules, and widespread opportunity in these regions are helping to fuel the spread of alternative lending investment.

To date since 2015, India received the second most alternative lending deals of any country in the world, behind only the US. And it appears primed for more growth.

Today, there are more than 400M millennials accounting for a third of India’s population and almost half the workforce, according to research from Morgan Stanley. But over 40% of adults over 25 in the country do not have a bank account, and therefore a reliable credit source, according to the Google study.

With such a young population and so many unbanked working adults, India makes sense as a key area for alternative lending investment. Investors agree. The below graph shows deals have risen each year since 2014. 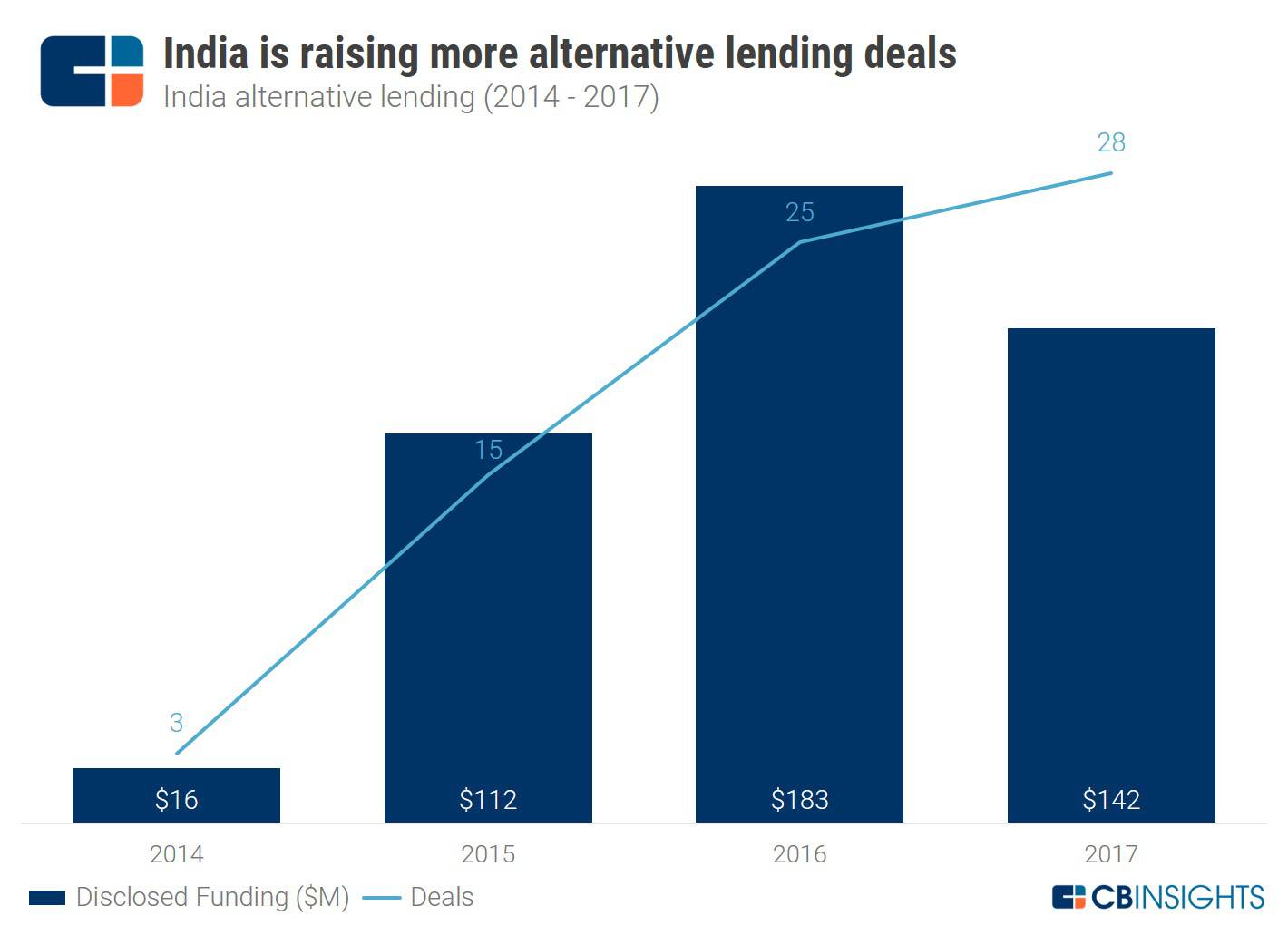 Over the last four years, the type of alternative lending company raising money in India has become more SMB focused.

In 2014, 80% of all dollars raised went to search comparison company BankBazaar.

Since 2015, investment has been focused on business lending, with SMB focused lenders raising 50% of all funds in the space.

Companies like Capital Float and Lendingkart are technology-led orginigation platforms providing small businesses with working capital. There are approximately 51M SMBs in India.

Amazon is one of the high-profile investors that see an opportunity in alt lending in India. After investing in BankBazaar in 2015, and building out their own business lending model in the US, there are rumors that Amazon is looking to invest about $5-10M in Capital Float. Helping SMBs obtain credit in India could help Amazon bring more merchants onto its platform in the country, where it is competing heavily against Flipkart.

Another notable trend among alternative lending startups is the redesign of credit scores. EarlySalary is a company that uses alternative data to provide bridge loans until the next salary credit. The company’s platform combines traditional credit scoring with social and online scoring technology.

Southeast Asia is made up of 11 nations, and the internet is gaining about 3.8M users per month, according to the Google study.

Alt lending investment was virtually nonexistent in Southeast Asia up until 2017 when funding took off. The $62M raised last year accounts for 68% of all dollars rasied to date. The median deal size jumped from $740K in 2016 to $2.9M in 2017. Across all 31 investments since 2012, over 90% of them were in seed/angel or Series A rounds.