As countries and businesses look to wean themselves off of fossil fuels, biofuel has offered a promising alternative — organic materials can be converted into fuel sources that are chemically similar to traditional oil and gas, but with far less environmental impact. Despite the potential, however, biofuel companies have struggled to turn organic matter into a scalable energy source.

Biofuel companies have been hampered by a lengthy and resource-intensive production and refining process, and controversy around using food products for biofuels instead of consumption. Ultimately, while producing fuel from organic materials sounds environmentally friendly, biofuel production is actually far from carbon-neutral.

Now, a new discovery by French scientists could hold a key to streamlined, carbon-neutral biofuel production. An enzyme discovered in some species of algae has been demonstrated to convert fatty acids into usable hydrocarbons that can be burned as fuel without the need for any further refining or modifications.

At the heart of sustainability debates around current biofuel production is palm oil, one of the highest-yield current biofuel sources. While its potential as a fuel source is drawing attention, palm oil is also the most-consumed vegetable oil in the world due to its many uses in cooking, industrial processes, consumer goods, and more. Extensive cultivation of oil palms to meet this demand has drawn criticism as native forests are razed to make room for plantations, destroying local ecosystems and reducing forests that counteract climate change by absorbing C02.

Given the negative impact this cultivation has on CO2 concentration, biofuel has turned out to be a poor choice as an alternative energy source.

Fossil fuel sources like gasoline are mostly composed of branched hydrocarbons, where carbon atoms are bonded to three or more other carbon atoms. Fatty acids resemble hydrocarbon chains, but with the last carbon atom on a chain bonded to two oxygen atoms. This single difference turns fats into weak acids that are likely to take solid form, making them produce less energy upon combustion than fossil fuels and more difficult to transport.

Current methods of isolating the last carbon atom from a fatty acid are difficult, lengthy, and inefficient. Some of these approaches involve complex chemical reactions with uncommon reagents like sodium carboxylate or palladium on alumina, and do not have a 100% conversion rate of fatty acids to hydrocarbons.

But the enzyme identified by French scientists discovered in algae is able to trigger a biochemical reaction that dislodges that last carbon atom and directly converts the fatty acid to a useable hydrocarbon without any intervening steps. Perhaps most unusually, the only input required to trigger this reaction is light — blue light specifically. This is especially notable to biochemists because light triggers few chemical reactions in the natural world outside of photosynthesis.

The scientists found that when exposed to blue light photons, the enzyme present in the algae absorbs an electron from an adjacent fatty acid, leaving the fatty acid chemically unstable. In order to return to a stable state, the fatty acid ejects its last carbon atom in the form of CO2 and replaces it with a hydrogen atom, returning the molecule to a stable state.

This new, stable molecule is a hydrocarbon that is ideal for use as a fuel source, and the process of converting fatty acids in algae to hydrocarbons continues as long as the enzyme is exposed to blue light. At wavelengths other than the blue light spectrum, the reaction would not take place.

With light being the only required input, scientists did not need to constantly supply the algae with a chemical energy source to keep the reaction going, unlike other biofuel production processes. And, since algae can store over 50% of its biomass as fat, current production methods can yield an estimated 10,000 gallons of usable oil per acre of algae growth. With the introduction of the newly-discovered enzyme, the algae can produce the same yield at a further accelerated rate. 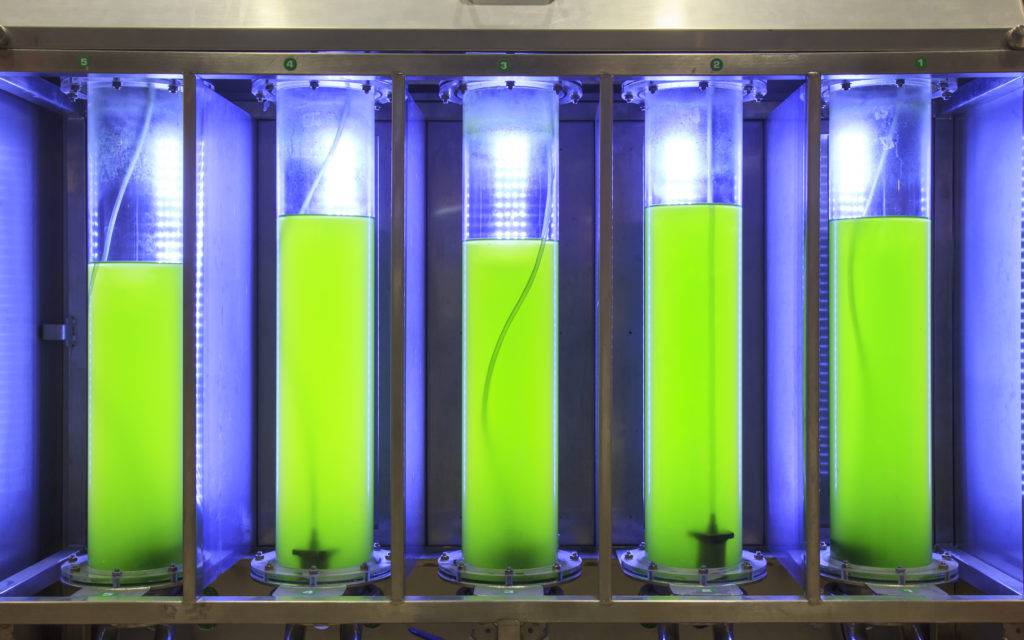 While algae has yet to be grown at scale for biofuel purposes, algae growth raises far fewer conservation and ecological concerns than other biofuel sources. The controversial use of corn, soybean, or rapeseed (canola) harvests for biofuel purposes has driven a “food vs. fuel” debate, and the extent to which biofuel production contributed to the 2007-08 food price crisis continues to be debated. Additionally, algae doesn’t require fertile land that could be used for food products and its ability to grow in brackish water means that large-scale algae growth won’t compete with agriculture for fresh water supplies.

Recent developments in genetic engineering have also allowed scientists to grow species of algae that produce twice as much fat as those found in nature. As the underlying technology develops, combining genetically-engineered, fattened algae with the newly discovered enzyme could result in higher yields per acre and a faster conversion process. The end result? Potentially lower-cost, environmentally-friendly alternatives to fossil fuels.

The original research “An algal photoenzyme converts fatty acids to hydrocarbons” was published in Science. Full information is available here.