Research Brief
4367
Airbnb's newest patent also moves it into the global connectivity race with an approach different to that of Facebook and Google.

Using our patents search engine, we have unearthed a newly-published patent application from Airbnb, which was originally filed in October 2016. The patent application, titled “Beam Device Architecture,” describes a system to compress cellular data, allowing people to more easily go online in areas of limited internet connectivity. Explicit mention is made regarding less developed areas of the world in Asia and Latin America where Airbnb is active.

The patent would push Airbnb into the realm of Facebook and Google, both of which have explored forward-looking initiatives to extend internet access to rural areas. Google, for example, launched Project Link to build fiber-optic networks in Africa and envisioned fleets of balloons providing internet access via its Project Loon (a similar Titan drone-beamed internet project was shut down). Meanwhile Facebook has tested solar-powered drones for extending internet access. However, Airbnb’s patent focuses on easing access to existing internet networks, rather than creating new ones.

The patent application describes how a bubble-shaped device called a “beam modem” and “beam API server” act as intermediaries between the user’s device (e.g., smartphone) and external web service, compressing the request from the user before sending it on, and then compressing the response before passing it back to the smartphone or other device.

We highlight one part of the process below. 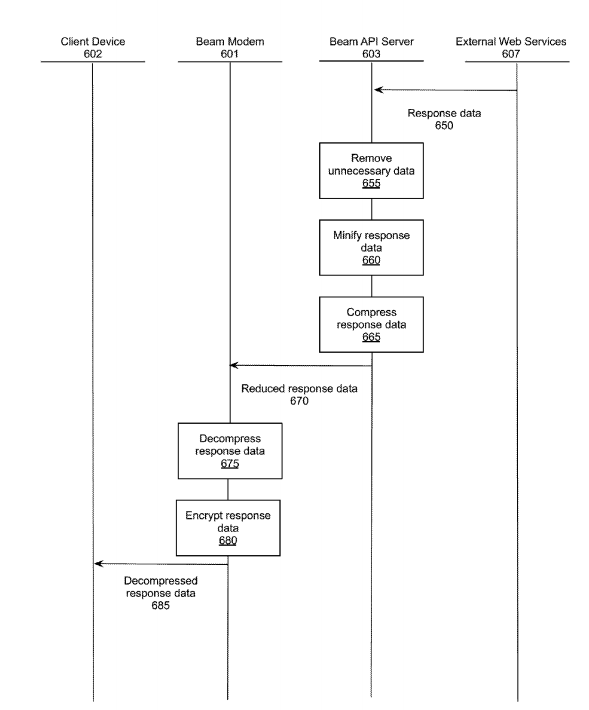 The patent specifically mentions China and Cuba as countries with underdeveloped infrastructure for wireless internet. Both countries are major growth opportunities for Airbnb, which is still relatively early in cracking China’s $500B+ domestic tourism market. Cuba, on the other hand, is an area where Airbnb has experienced explosive growth in hosts and activity since it began offering accommodation there in April 2015.

By offering reliable wireless internet access to its listings, Airbnb could differentiate its service from local competitors (in alternative accommodation or standard online hotel booking) in China, and perhaps in markets like Brazil and India as well. Locally-based competitors include Xiaozhu in China ($80M in disclosed funding), Oyo Rooms in India ($542.6M), and Hotel Urbano ($130M) in Brazil.

Furthermore, by giving hosts a way to offer their guests more consistent wireless access, Airbnb could move toward a more standardized guest experience across the world, making international travelers feel more comfortable about staying with Airbnb rather than an international hotel chain. Also, as Airbnb increasingly targets business travelers, guaranteed connectivity may become even more important.

Beam seems to be a brainchild of Airbnb’s new innovation unit, Samara, which launched in August 2016. Samara aims to focus on long-term innovations and urban planning through software, hardware, and even new real estate models. In its first major project, it designed a community center to connect guests and locals in a rural village in Japan. We can see Samara’s focus on design in a photo of the Beam device below. The photo was pulled from LinkedIn, where it was posted by Alex Blackstock, a founding member of the Samara team whose name is on the patent app.

There is a clear similarity between the photo to the right and the drawing in the patent (left).

In 2016, Airbnb received their first actual patent grant. That patent described methods to blend online and offline data to verify the identity of a user, a feature that is perhaps more core to Airbnb’s business model than the Beam device and which could help increase trust between Airbnb hosts and guests.

Check out the CB Insights platform to discover patents or continue to track Airbnb’s patents and innovation around hardware devices, connectivity, and trust.