We used CB Insights data to analyze ag tech trends, which we define as technology increasing the efficiency of farms, in the form of software, sensors, aerial-based data, and internet-based distribution channels (marketplaces).

2014 saw a jump in deals and dollars going into the space, with more than $170M invested across 75 deals. One possibility is that investors saw the value in ag tech after the acquisition of The Climate Corporation by Monsanto for $1.1B at the end of 2013. The Climate Corporation also buoyed funding numbers in the prior years, with $40M+ deals in both 2011 and 2012. 2015 has seen a slowdown in the number of deals, but is on track to exceed the previous year’s funding, with rounds into farm management software startup Granular and urban agriculture technology company AeroFarms. Note: This analysis does not include biotech companies, i.e. those focused on genetic engineering or seed improvements to boost yields. 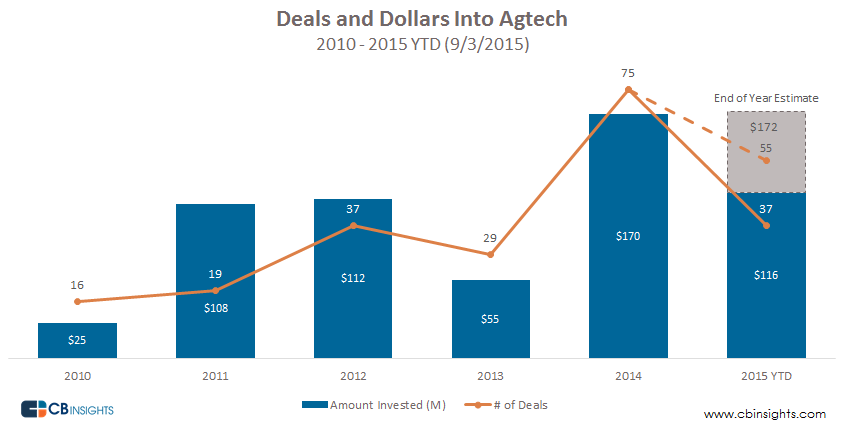 Ag tech is still a growing industry, with most deals happening at the Seed or Series A stage, with these stages taking a combined 55% of total deals. The number of seed deals has been steadily rising, with 30 happening in 2014.

Note: ~70 deals in the space were connected to unattributed rounds that did not have a distinct round categorization. 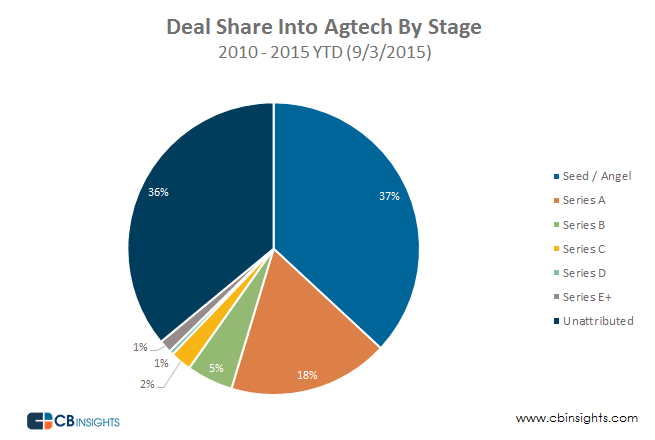 Below are some of the active investors in ag tech. Khosla, which made a sizable return on their investment in The Climate Corporation, has invested in several other ag tech companies including Blue River Technology and Granular. Omnivore Partners, an India-based firm that focuses on agriculture, has invested in several local companies, including Ecozen Solutions and Eruvaka Technologies. Y-Combinator has recently seen more ag tech companies enter their batches, including crop-hydration sensor Tule and aerial imaging for agriculture startup TerrAvion.

Want more data on Agtech? Check out our venture capital database below.