The micro-investing app has grown an of army of 2.2M accounts. But making money off these first-time, lower-income investors won't be easy. To do so, Acorns is building out higher-tier investment services and moving into the highly saturated $40T retirement planning market.

Launched in 2013, Acorns is a new breed of robo-advisor. Users link their credit card to their Acorns account and let Acorns “keep the change” on every transaction. Acorns then automatically invests it in fractional shares of exchange-traded funds (ETFs), allowing investors to accumulate wealth gradually and in the background.

Acorns is unusual in targeting “up-and-comer” first-time investors with limited wealth, and bringing them into the market via a passive micro-investment model.

With over 2.2M investment accounts in the US since launch, the company has proved there is a clear niche for its product. It is already the largest robo-advisor by client accounts.

As Acorns looks to build a profitable business, it is starting to roll out more sophisticated financial services, and hoping to transition its users onto these products, as well as appeal to more “upmarket” investors.

But this means Acorns is going from targeting a relatively untapped and large market — those with less than $100K in income account for roughly 70% of the population — to the much more competitive and highly saturated $40T retirement planning market. It will be competing against giants like Wealthfront and Betterment, as well as incumbents like Vanguard.

Acorns is making a number of important moves:

In this post, we used CB Insights data and SEC public filings to dig into Acorns’ growth and key metrics to see how well-positioned the company is to expand its product and compete against major industry players.

In previous research briefs, we compared the earliest robo-advisors Betterment and Wealthfront. We also dug into Stash Invest, Acorns’ closest competitor. Stash Invest launched in 2015 and has been closing the gap on Acorns, recently announcing that the company had crossed 1.2M customers.

Acorns received SEC approval in Q3’13 and in four years has grown assets under management (AUM) to $528M across 1.3M customer accounts as of the firm’s last SEC filing on 9/15/17 — and reached 2.2M total customer accounts in the US in October, according to CEO Noah Kerner. This makes Acorns the largest robo-advisor in the market to date by total reported client accounts.

But with a micro-investment business model Acorns is a variation on the established robo-advisor model pioneered by Betterment and Wealthfront. The app has surged in popularity as the client account data below shows, however the trade-off is lower total assets under management (AUM). Accounts on average are worth significantly less that at traditional robo-advisors, as you can see in the next section on AUM.

Of note, Acorns’ client account totals dropped by 531,255 between 7/31/17 – 9/15/17. The drop may be an internal accounting correction that was made following a regulatory finding that Acorns settled with FINRA in July 2017, or could also reflect new competition as Stash enters with a competitive product. However, Kerner’s reported client totals from late October indicate the company is seeing continued account growth.

Below is a snapshot of Acorns’ reported client account growth since launching.

Another unusual move on Acorns part has been opening a second operation outside the US. Betterment, Wealthfront, and Stash have no international operations.

Acorns Australia has attracted over 300,000 users through the joint venture and manages approximately $100M in AUM. While this is minimal compared to Acorns US, it serves as a proof of concept for Acorns if they decide to expand into more markets.

Both Acorns and close competitor Stash are banking on retirement services as the next opportunity for growth, with Stash launching a service Stash developed in-house and Acorns acquiring Vault, a B2B investing service aimed at small businesses. 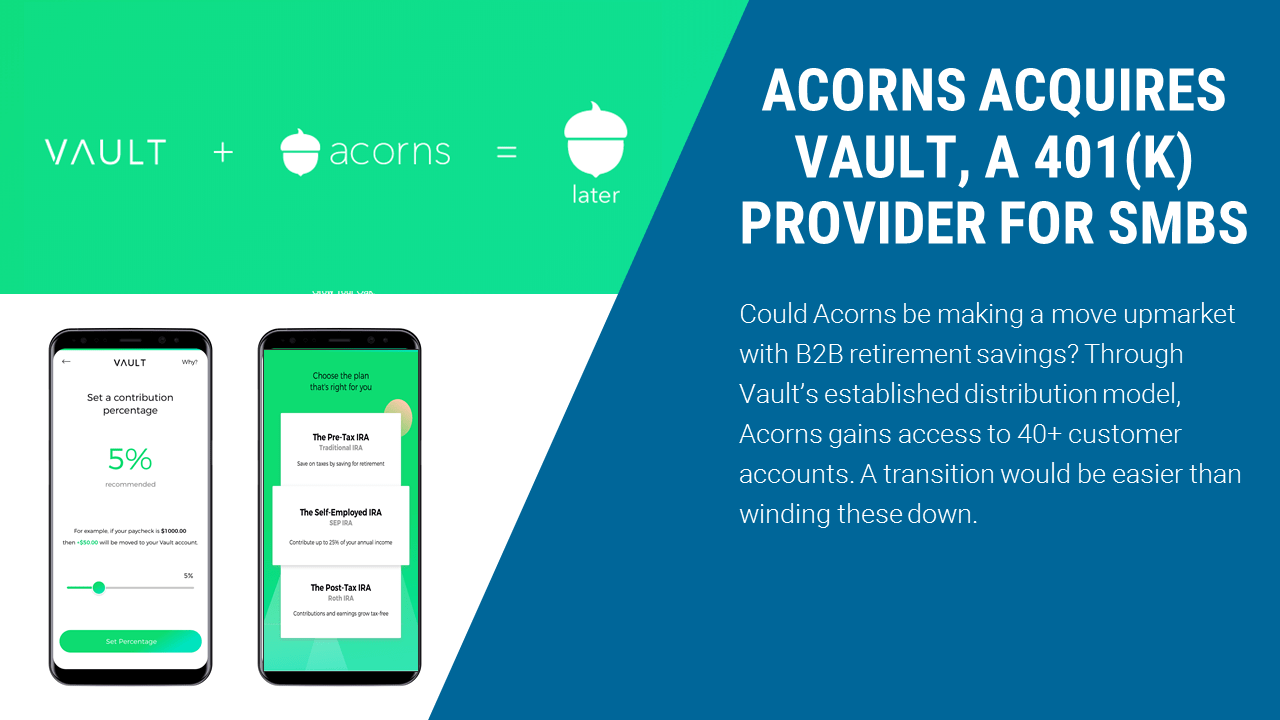 While Acorns’ AUM is more than 4x Stash’s AUM, Stash’s expedited growth is largely driven by the firm’s B2B offering. Acorns does not formally have a B2B offering. However, in December 2016, the firm reported having 82 advisory firms soliciting services on behalf of Acorns.

Like Stash, after Betterment launched a B2B model, it also saw an uptick in growth and soon after took the lead over Wealthfront in both AUM and client accounts and has remained ahead. While Acorns still maintains a strong lead in AUM despite its lack of B2B channel, Stash is quickly closing the gap on client accounts.

That said, both Betterment’s and Stash’s spikes could be short-lived. If Acorns is focused on transitioning their existing users from part-time savers to longer-term investors, it makes sense to focus on rolling out complementary services and engagement tactics, rather than pursuing B2B growth.

Below is a quick snapshot of each company’s client accounts as of each firm’s latest SEC filing. Each firm maintains different reporting timelines and the numbers may appear flat as a result of that timing. 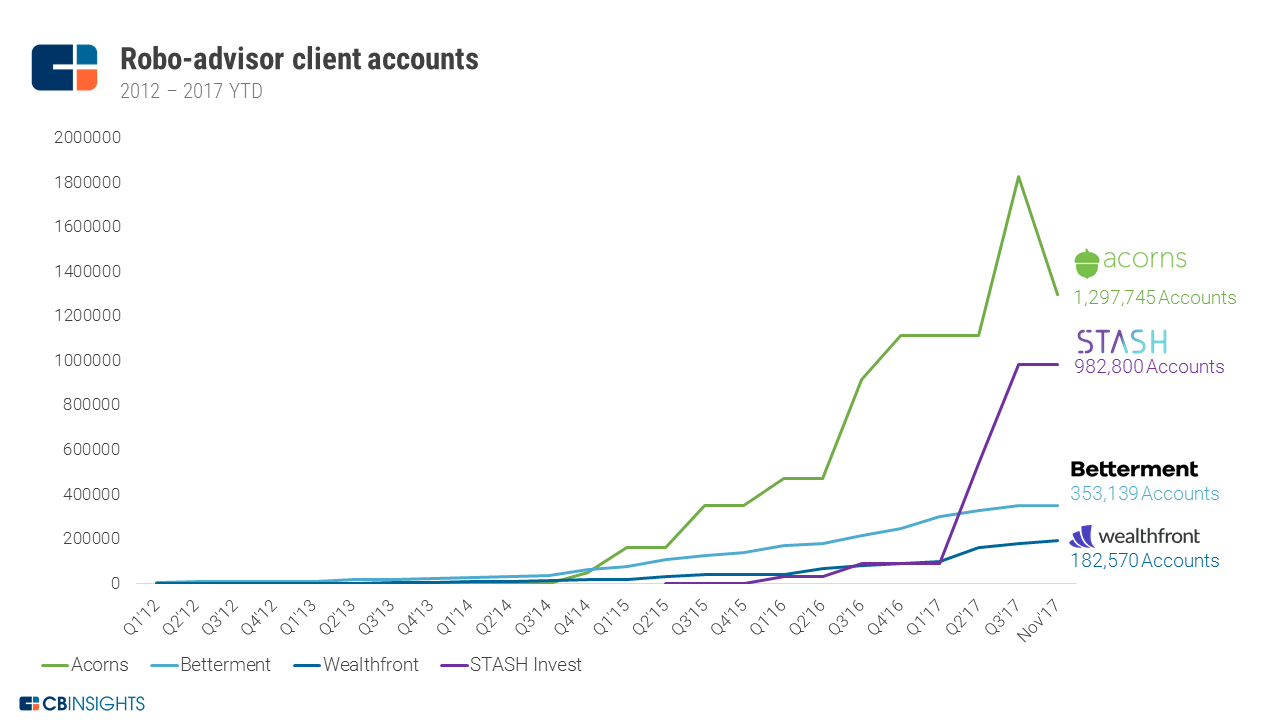 Acorns’ largest AUM jump followed the partnership with personal finance management app Clarity Money in July 2017 which embedded Acorns in Clarity Money’s app and gave the company’s 600,000 customers access to Acorns. This is around the time Acorns saw AUM  and average account size jump significantly. This was also around the time Acorns confirmed the Found Money program had grown to 150 commerce partnerships. 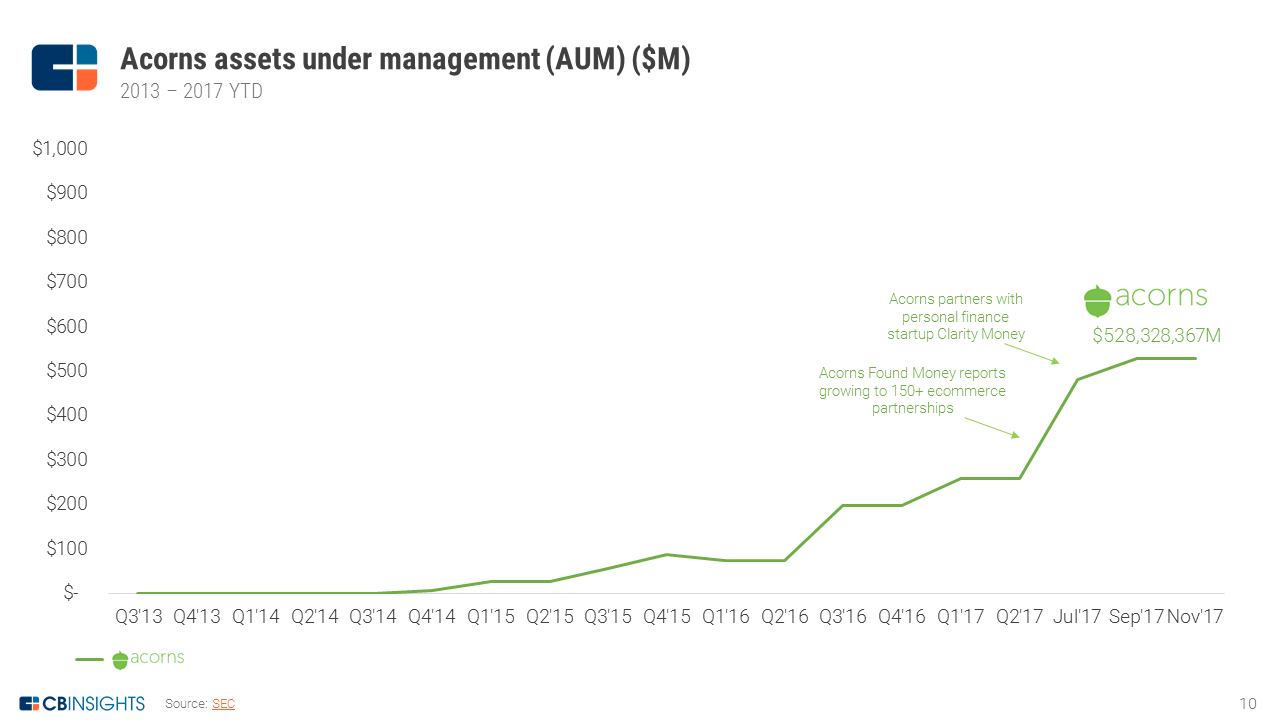 Found Money, illustrated below, is a partnership program with D2C commerce companies that gives Acorns investors a kickback into their investment account for making purchases through the Acorns app.

Acorns saw its first big AUM uptick in Q3’16 when the company blended the investment app with Found Money. Acorns’ AUM grew 168% between Q2’16 and Q3’16.

In October 2016 the company reported that the brands are footing 100% of the bill for these rewards and reported that partner brands have seen a greater than 50% average lift in transactions for Acorns customers. 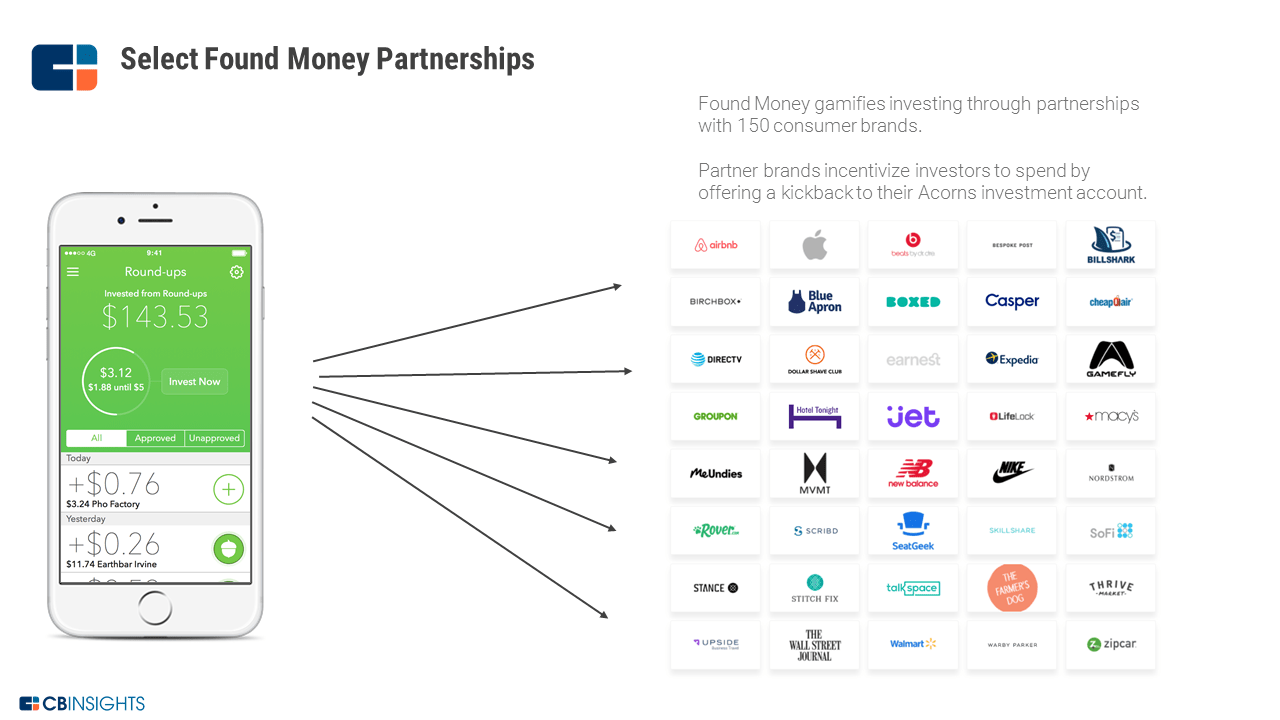 What’s different about micro-investing versus traditional robo-advisors is that trading frequency is significantly higher. Case in point: Acorns is on track to do 1B trades in 2017. Though the dollar amounts invested are relatively low, Acorns’ trading volume is roughly 17x Fidelity’s.

Acorns’ model relies on taking the aggregated sub-dollar amounts and automatically investing them in fractional shares in ETFs. In contrast, Stash also automatically siphons off savings, but on a recurring basis and not from round ups. Also, Acorns automatically makes the investment selection while Stash investors must manually select their own portfolio allocations (though with a significant amount of in-house guidance and educational resources).

Acorns has prioritized app design, which makes sense given that their business model is grounded on high engagement.

To build a moat around the technology, Acorns has gone as far as patenting the UX that underlies the platform and holds 5 patents related to UX and the process for managing transaction-based investments.

Below is a snapshot of the patents for a savings and forecasting UX, which is similar to the app’s design today.

Acorns has also mentioned mining behavioral investment patterns and holds patents related to methods for identifying patterns. In the future, Acorns might look to build out tools that monitor investment behavior and help advise users on the trade-offs between saving & investing and spending. 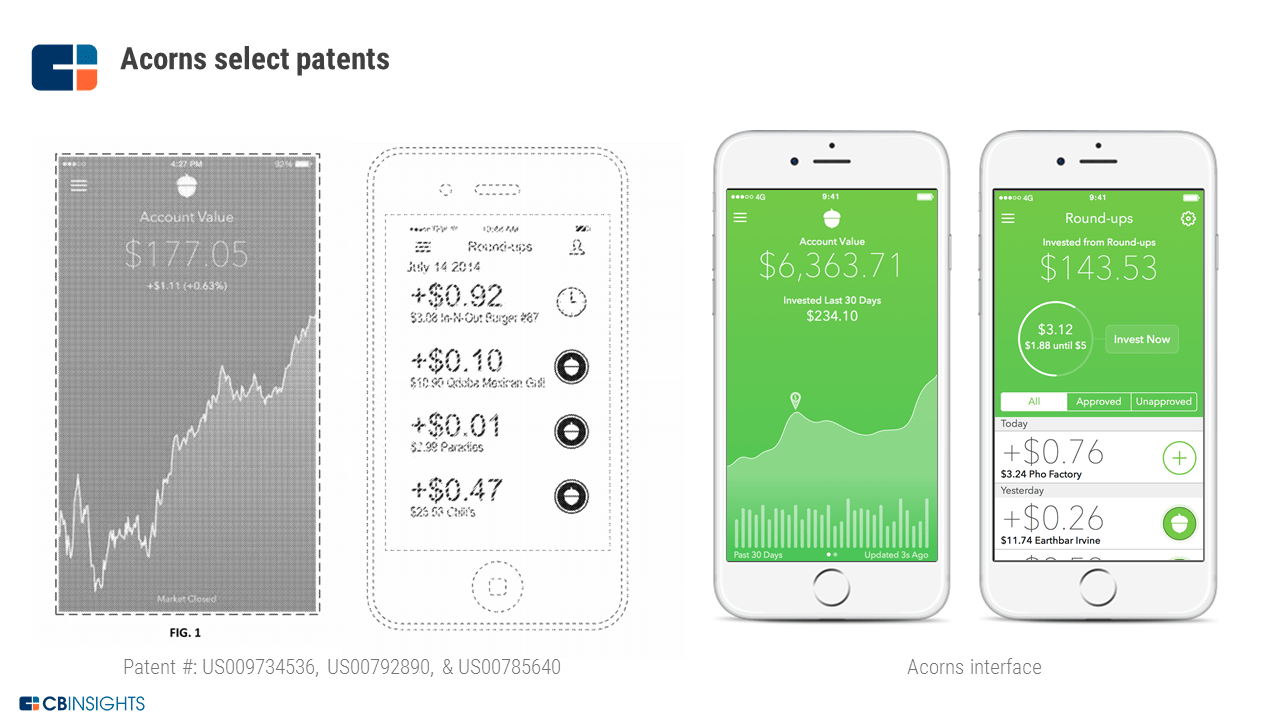 This initial attention to detail has likely helped Acorns become a top 20-ranked finance app across the App Store and Google Play store.

Noah Kerner said in June at CB Insights Future of Fintech that 97% of customers access Acorns through mobile despite having a web app too.

Though Stash has quickly jumped ahead of Acorns on Google Play, it only has a mobile product and Acorns has been on the market longer. Further, as we detailed in the Stash teardown, Stash is spending more on marketing to promote the app while Acorns is relying more heavily on organic growth. That said, relying on organic growth was likely much easier before Acorns had a successful competitor on the market. Marketing may soon become a bigger part of Acorns strategy.

Acorns has been very successful growing their distribution network by using partnerships with other companies, saving them from more expensive targeted marketing and app promotion campaigns. In addition to the Found Money and Clarity Money partnerships discussed above, Acorns has also partnered with investor Paypal.

Paypal, which led Acorns’ $30M Series D in April 2016, has 218M accounts globally and though the partnership is limited to the US, it could have a larger impact on account growth when fully rolled out in 2018. Similar to Clarity Money, the partnership will extend access to Acorns through Paypal’s app. 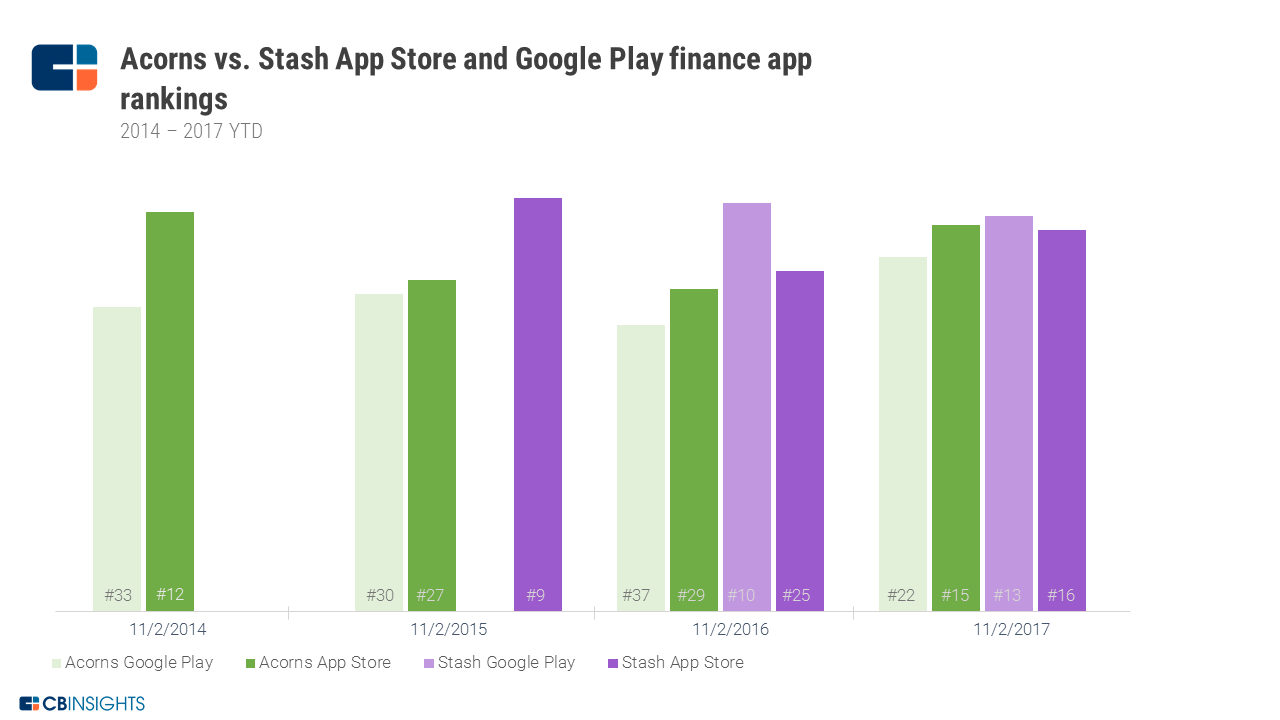 Grow Magazine, Acorns’ in-house educational content team, has also become a key component in the company’s content marketing strategy. The website, covering financial news and how-tos, has seen approximately 5M visitors since it launched last year. Initially it was used to help convert readers into customers and vice versa. Now, it is providing an alternative revenue stream through partnerships with media outlets.