Drilling into Accel Partners' financing trends, exit and people data provides us a unique data-driven view into where the firm sees opportunity.

Accel Partners is perhaps best known for its prescient early bet on Facebook. But the venture firm has long been one of the most active venture capital firms in Silicon Valley and has been the investor in prominent exits in industries ranging from big data to cybersecurity to home automation.

Using CB Insights data on Accel yields insights into their strategy, recent performance, and where the venture firm is seeing opportunity.

Notable deals in 2015 included an investment in Olacabs‘ $400M Series E round, Slack‘s $160M Series E round, and a pre-aquisition growth round for Lynda.com (Lynda was acquired by LinkedIn in April 2015). The prior year, also saw some noteworthy deals including Flipkart‘s $1B Series G mega-round, and SunRun‘s pre-IPO $150M Series E. Accel was also serial investor in Flipkart, participating in its Series D in 2012, Series E in 2013, and Series G round in 2014.

Slack, in particular, exemplifies Accel’s investment style. They’ll often jump in early and continue investing in later rounds. In the case of Slack, Accel invested in every round, including its 2010 seed round. For several years, Slack operated as a gaming company called Tiny Speck, but later pivoted to developing its enterprise messaging app that was most recently valued at $2.8B.

More of the firm’s notable investments are detailed below. Note that all of the companies we have highlighted here received their first Accel investments at the Series A or B stage:

Below is a graph of Accel’s monthly investment activity (deals & funding) over time taken from their profile on CB Insights.

In 2015, Accel had 36 exits including several IPOs. Here are some of Accel’s recent exits:

The scatterplot below highlights Accel’s exits with disclosed valuations over time. As can be seen, the firm participates in many exits near, at, or above the billion-dollar mark highlighting the firm’s ability to get into venture capital’s black swans quite regularly.

In March 2015, Accel raised $305M for its Accel India IV fund, which will focus on early-stage startups in India. Prior to that, in March 2014, Accel raised two new funds totaling almost $1.5B. The $475M Accel XII fund, which will focus on early-stage investment opportunities, and the $1B Accel Growth Fund III. The latter was Accel’s largest single fund ever and was created to focus on more mature growth-stage companies.

These funds reflect Accel’s unchanged dual-focus strategy of jumping into companies early but also investing heavily in late-stage companies. Accel XI and Accel Growth Fund II raised in June 2011 for a combined $1.35B were the firm’s last general funds aimed at this dual approach.

Another notably large fund is the $475M Accel London IV raised in March 2013. Accel is one of the UK’s most active tech VC investors. The $155M Accel India III raised in November 2011 is also indicative of Accel’s early expansion into Asia with a focus on India. Investments in India account for almost 80% of Accel’s deals in Asia.

Notable Partners – Big name stepping down; others filling his place

Here is the activity of some of Accel’s most notable partners.

In their 2015 retrospective Reflecting On 2015 And Looking Ahead To 2016, Accel shared their take on the question of “bubble-or-no-bubble” (they said there would be no “far-reaching collapse” but would be a “reset in valuations” in certain sectors. They also offered up 9 industries of rapid growth they’re paying attention to in the coming years.

Comparing investment in 2011-12 and 2014-15, the internet and mobile sectors shows an overall increase in deals and funding. Deal volume in Internet grew over 26% and funding amounts more than doubled, driven primarily by two huge investments in Flipkart and many other moderately-sized deals. Similarly, mobile and telecom has seen a 60% increase in deal volume with investments going to mobile ride-hailing apps such as Olacabs and TaxiForSure.

The Industry Heatmap shows the distribution of investments by industry for 2011-12 on the left and 2014-15 on the right. The size of the box represents the number of deals and the darkness of the blue represents total funding.

Drilling into two internet subindustries (e-commerce and software/services), we can see how the breakdown has changed. Over these two periods, e-commerce has increased 36% in deals volume and has more than doubled in dollars invested. Where in 2011-12 internet software and services represented about double the deal volume and capital of e-commerce, in more recent times the figures aren’t nearly as lopsided.

Distribution of deals by stage shifted slightly over the 5 year period. Comparing the first half (Q1’11 – Q2’13) to the second (Q3’13 – Q4’15), Accel has moved its focus away from Series A deals, increasing investment at both the early and later stages. Series A deals dropped off with 14% lower investment participation and 28% fewer deals. In that same period, the amount of seed/angel deals nearly doubled. And Growth Equity nearly quadrupled in capital invested, with deal count more than doubling at that stage.

The Stage Heatmap shows the distribution of investments by round, with the first 6 quarters beginning in 2011 on the left, and the next 6 quarters on the right. The size of the box represents the number of deals and the darkness of the blue represents total funding.

Financing by Stage – Series B most common; late-stage with biggest deals

Accel most commonly participates in Series B and Series A rounds which make up about 26.7% and 26.2% of all investments, respectively. But as would be expected, the biggest deals are in the late-stage rounds where median deal size in which Accel participates is over $35M. Year-over-year from 2014 to 2015, Accel has seen 31% growth in seed deals with participation in a median round size of $2.1M. Series D deals grew over 60% with a median deal size of $35M. Below is a look at trends in round participation in the last 2 years.

New vs. Follow-on investments – volatile ratios over past few years

The ratio of new to follow-on investments (investments in companies in which Accel has already invested) has seen a bit of volatility in the last 5 years. New investments saw a low in Q2’13, recovered somewhat in 2014, but has since reverted back to 2013 levels. The ratio at Q4’15 was at only about 37% new investments, with the balance being follow-ons.

Below is a screenshot from the Investor Analytics tab on CB Insights showing the ratio of new investments to follow-on by quarter over the last 5 years. 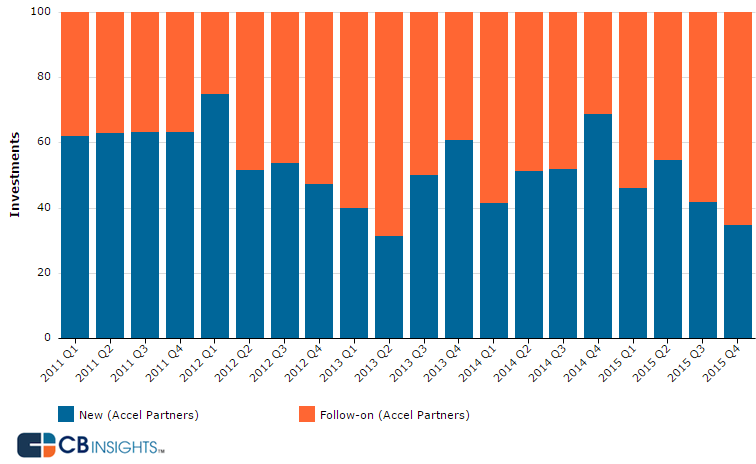 Accel looks to feeders like First Round Capital and SV Angel for many of its early-stage investments as the Investment Syndicate Dashboard below highlights. New Enterprise Associates has also been a frequent source of deal flow as well as a very frequent co-investor. Accel’s top coinvestor in terms of unique companies invested in is Meritech Capital Partners. Accel has also frequently invested with fellow Silicon Valley VC, Sequoia Capital. Accel is Sequoia’s top coinvestor, and the two have coinvested in over 60 rounds together, the most overlap among all of Accel’s coinvestors.

Below is the Investment Syndicate dashboard for Accel Partners which highlights and ranks top dealflow sources and syndicate partners. 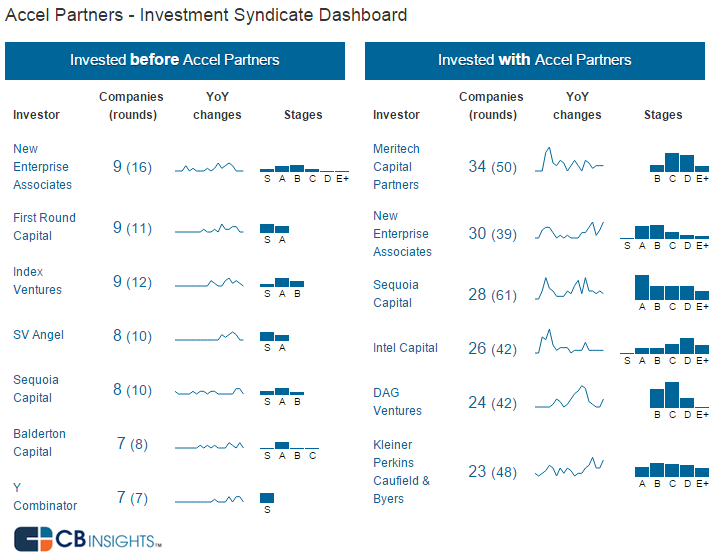