We take a closer look at these top VCs' blockchain investments, which range from new cryptocurrencies challenging Bitcoin to digital collectible cats.

Two of the top early-stage tech VCs, Andreessen Horowitz and Union Square Ventures, have been placing bets on blockchain technology since 2013.

While their early investments focused on bitcoin mining and exchanges, recent investments reflect a shift toward new foundation-layer protocols, cryptocurrencies, and decentralized applications.

Below, we show how their approaches to the sector have evolved, highlighting equity investments, cryptocurrency hedge funds (like MetaStable and BlockTower), and portfolio companies that have pivoted toward tokens and ICOs (like Kik). 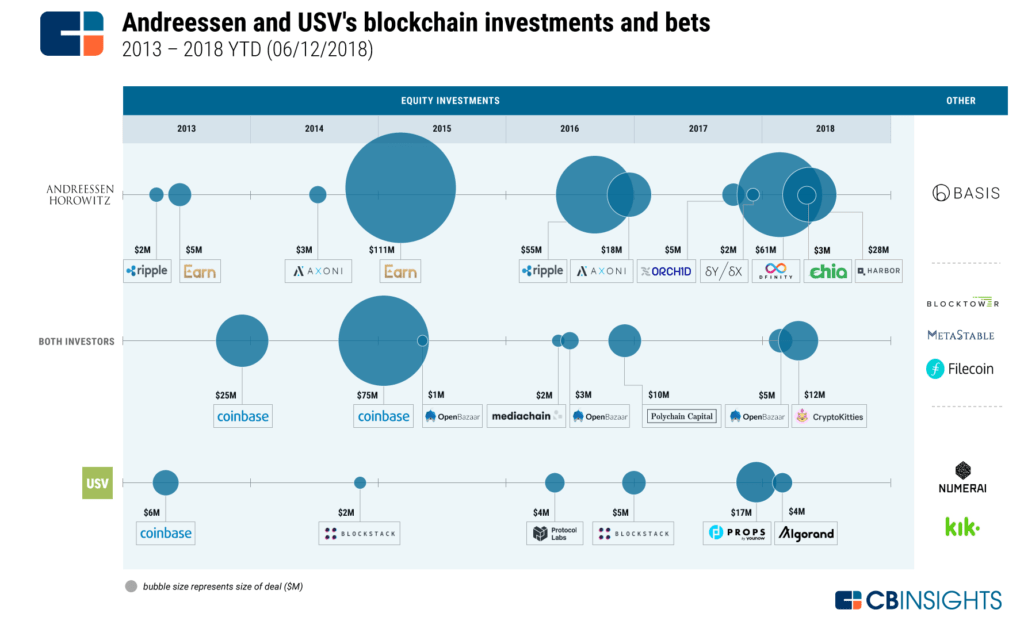 Many of USV’s crypto investments are dAPPs or support dApps. CryptoKitties, for example, is a dAPP that issues crypto-collectible digital cats. Its $12M Series A at the end of March saw participation from Andreessen. Another example is OpenBazaar, which is building a decentralized marketplace.

Andreessen Horowitz bets on Dfinity. Dfinity hopes to create a scalable, high-throughput “decentralized cloud” that will compete directly with Ethereum and other smart contract platforms. Eschewing an ICO, Dfinity received a $61M round in February from Andreessen and Polychain. Much of the money will go toward an “ecosystem fund” that will incentivize developers to build on top of the Dfinity protocol.

Two 2018 investments offer alternatives to Bitcoin. Bitcoin has been called slow and environmentally unfriendly. USV and Andreessen have bet on two different companies that hope to cure some of Bitcoin’s ills.

Bitcoin certainly has a head-start in terms of its network effect, but challengers hope to dethrone it and its new Lightning Network, which speeds up bitcoin transactions.

Andreessen has participated in two rounds to Earn that total $116M, and contributed a total of $100M to Coinbase’s Series B and C rounds.

While a purchase price hasn’t been made public (estimates are at around $120M), Earn’s early foray into bitcoin mining and resulting bitcoin holdings probably sweetened the deal for its investors.

Earn has gone through multiple iterations, pivoting from bitcoin mining, to manufacturing chips for amateurs and tinkerers, to a social network where users can make money by replying to e-mails. It remains to be seen how Coinbase will integrate Earn’s line of business into its own, but the deal shows that Coinbase is willing to experiment on meaningful use cases for crypto beyond speculation.

Andreessen and USV have participated together in 11 deals since 2013. Their two most recent co-investments were a follow-on to OpenBazaar (for $5M), and a $12M round to CryptoKitties, which saw lots of investor interest.

CryptoKitties is building out a larger gaming ecosystem around its collectible cats, but the promise of non-fungible cryptoassets goes beyond gaming into real-world assets (think real estate title on a blockchain).

Did Andreessen’s Ripple gamble pay off? Andreessen has made two investments in Ripple over the years — once in 2013 and again in 2016. Ripple is a building a cross-border payments solution for banks, but also issued (and owns a majority of) the XRP token.

While XRP is meant to complement Ripple’s banking software goals, it has added a wrinkle to the company’s story. As of April 12, XRP’s market capitalization stood at nearly $22B, while Ripple’s most recent private market valuation pegged the company at just over $250M.

With money to spend, Ripple announced on April 11 that it was investing $25M (in XRP) into Blockchain Capital, one of its own investors. According to Ripple, the $25M investment is a small fraction of the XRP on the company’s balance sheet.

The meteoric rise of ICOs has pushed VCs to reconsider their traditional financing mechanism. As Fred Wilson wrote on his blog, “With a new model, tokens, in its infancy, it begs the question of how it will impact our approach.”

A number of USV’s portfolio companies have held or are holding ICOs, including social media platforms YouNow and Kik. Furthermore — and perhaps as a hedge — both Andreessen and USV have invested in cryptocurrency hedge funds as equity investors (Polychain Capital) and deployed capital as limited partners (MetaStable), giving them broader exposure to token markets.