Research Brief
2451
A few startups are focused on stress reduction and cognitive enhancement, but others on more serious problems like depression and nervous system diseases.

The brain is relatively uncharted territory for tech. Harvard University geneticist George Church has written about impending technologies that “extend our brain both biologically and electronically,” while AFP describes the brain as “the next frontier for the tech sector.”

We used the CB Insights database to identify 17 startups targeting the brain with their products and tech-enabled therapies. In just the past year, companies like Halo Neuroscience, InteraXon, Headspace, Nootrobox, and Israel-based BrainsGate have raised VC funds for supplements, apps, wearables and other brain-boosting technologies.

Some companies hope to “hack the brain” to improve cognitive performance and reduce stress, while others are looking to treat mental illnesses and nervous system disorders. They use a range of methods, including nootropics, gamified brain training, app-led meditation, acoustics, non-invasive therapies, and wearable devices.

The most well-funded startup on the list, Neuronetics, raised a $34.3M Series F round last year and is backed by a range of investors including corporates GE Ventures and Pfizer Venture Investments. Neuronetics developed a therapy that uses magnetic fields to stimulate brain regions in patients who have not responded to anti-depressants.

Nootrobox, which develops and sells nootropics — supplements believed to be cognitive enhancers — direct to consumers, raised a $2.3M seed round in November 2015 from Andreessen Horowitz and angel investors.

Thync, also backed by Andreessen Horowitz as well as Khosla Ventures, has developed a mood-enhancing wearable device that uses electric pulses to stimulate different brain regions. Earlier this year, Bloomberg reported on the startup’s financial struggles, before it raised a new, undisclosed Series B round led by Noosphere Ventures.

We updated this post on 7/15/2016 to add 6 startups, including Israel-based Intendu, New York-based Happify, and South Korea-based Ybrain. 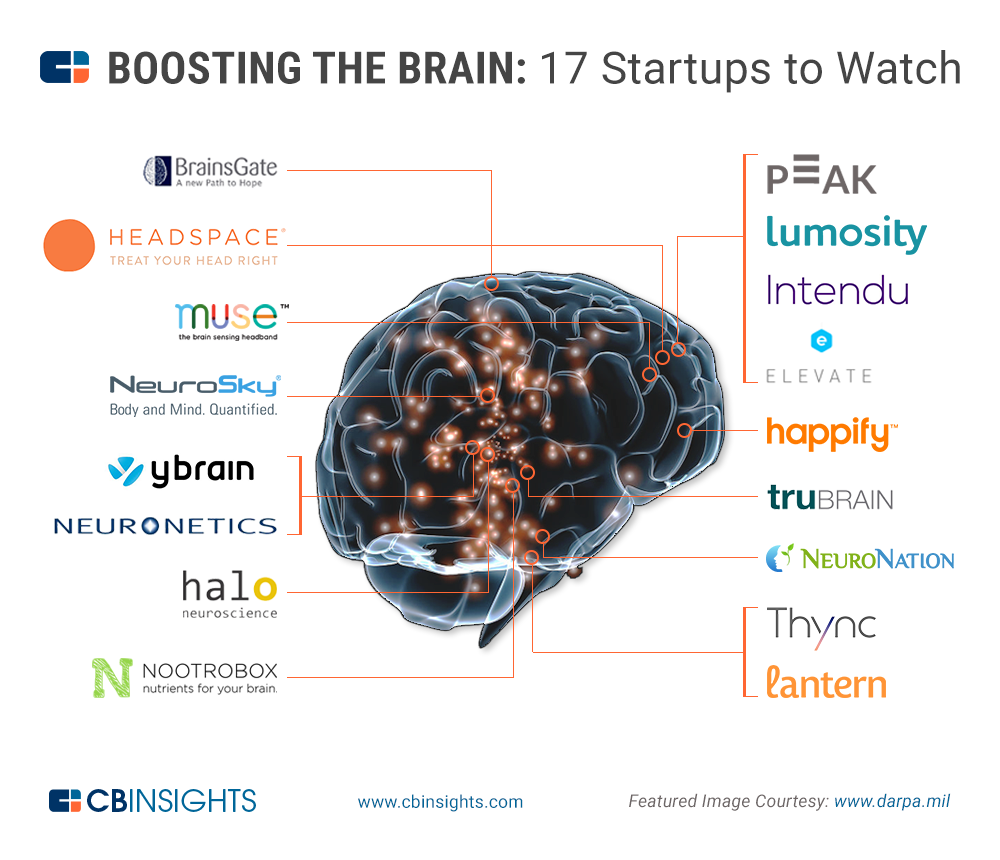 Among brain training apps, Elevate Labs, a game-based cognitive training tool which was selected as the app of the year by Apple in 2014, claims to have more than 10 million app downloads. A similar company, Lumosity, which settled with the FTC over its former claims to “reduce or delay cognitive impairment associated with age and other serious health conditions,” now says its games “challenge core cognitive abilities.”

See the table below for the complete list of startups:

Sign up for our venture capital database below for more information on health tech companies.