From cricket flour-based chips and cookies, to mealworm and fruit fly larvae-based foods, these startups are on a mission to take insect-eating mainstream.

Here’s our guide on how corporations can use startups to innovate faster.

Silicon Valley prides itself on powering the sort of innovation that feels more appropriate to a science fiction movie than real life: self-driving cars, virtual reality, and military-grade robots. But right now, a group of startups with plugged-in investors are working on a project that is considerably less lofty, if still fairly ambitious. That project? Convincing the American public to eat bugs.

While insect-eating (also known as “entomophagy”) has historically been frowned upon in many Western cultures, a 2013 report from the United Nations suggested that the consumption of wasps, beetles, and crickets could help alleviate world hunger due to their high protein and mineral content, and the relatively low environmental costs of production, including lower water and feed needs. Indeed, the report found that crickets require 12 times less feed than livestock to produce the same amount of protein. It was only a matter of time before entrepreneurs began attempting to seize this opportunity by founding companies focused on everything from insect farms to cocktail bitters made with toasted crickets.

Here is a look at a few of the companies in the mix: 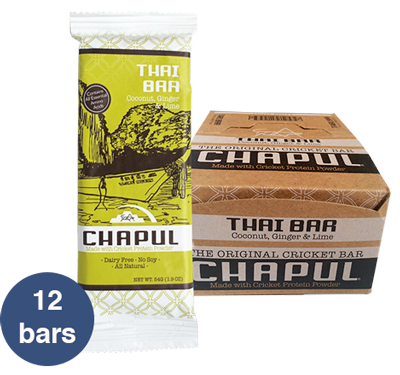 Salt Lake City-based Chapul earned a $50,000 investment from Mark Cuban when founder Pat Crowley appeared on Shark Tank two years ago. The company makes protein bars infused with “cricket flour” made from ground crickets. Today, the products are available in major grocery chains like Wegmans and Publix, and according to a story published by Fortune, Chapul is on pace to top $1 million in revenues this year. Crowley told Newsweek that a major key to success has been the fact that the crickets themselves are not visible in the product, similar to how the California roll popularized sushi in America by hiding foreign ingredients like seaweed and raw fish inside the rice. 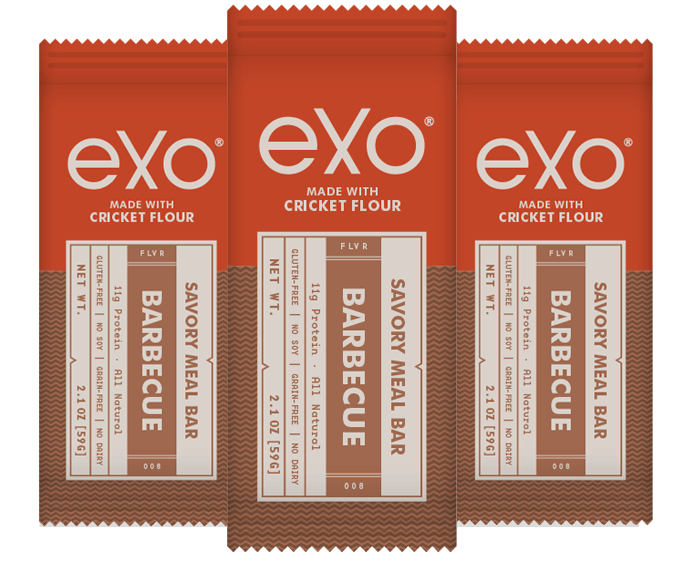 Exo is Chapul’s big rival in the cricket protein bar arena, having just recently raised a $4M Series A round from AccellFoods, Collaborative Fund, along with angel investors like Nas, Tim Ferriss, Dentsu Ventures, and the endurance athlete Amelia Boone. The company was founded in 2013 by a pair of Brown University roommates, who turned to the award-winning chef Kyle Connaughton to help develop its recipes. With the investment round, Exo is planning to roll out new products like ready-made shakes and protein powders, in hopes that the high nutritional value and nutty taste of crickets will make the insect a “gateway bug” for American consumers.

Entomo Farms is a wholesale supplier of cricket flour based out of Ontario, Canada. There, Fortune reports the company is cultivating a total of 90 million crickets and laying the groundwork to raise a Series A round. Entomo Farms’ cricket flour is used in the protein bars made by both Exo and Chapul, but its website also sells livestock feed and direct-to-consumer delicacies like BBQ mealworms and honey-mustard crickets. As cofounder Jarrod Goldin told Fortune, “We like to look at this as a disruptive business technology in the same way that solar panels are disruptive or Uber is disruptive for the taxi industry or Airbnb is disruptive for the hotel industry.” 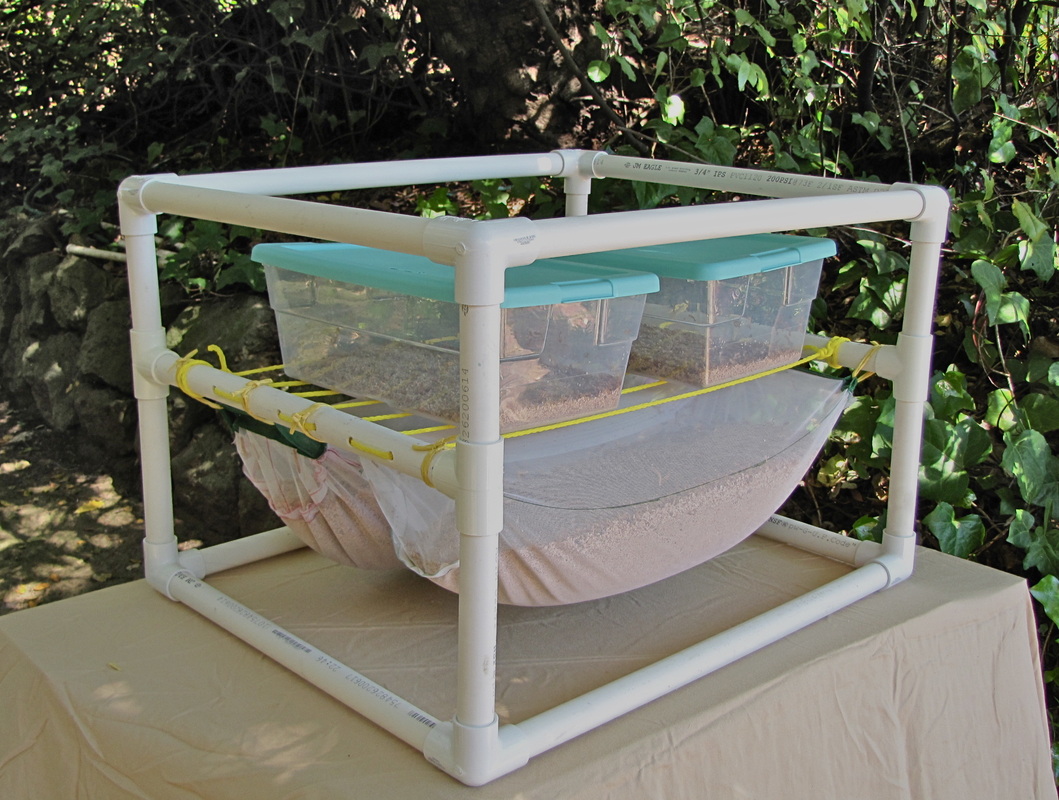 Just as more traditional types of farming led to the rise of the John Deeres and Caterpillars of the world, so too has insect-farming created a need for its own set of tools. Tiny Farms is a Silicon Valley-based company currently in the process of patenting a technology it hopes to license out to farmers to help them cultivate crickets efficiently. Earlier this year, it closed a seed round of an undisclosed amount, with investments from Arielle Zuckerberg, sister to Facebook CEO Mark Zuckerberg; Investors Circle; and Drew Fink. Shortly after, Fink told Wired that cricket flour could “go mainstream” as an additive to a wide range of consumer products including bread, pasta, and crackers. 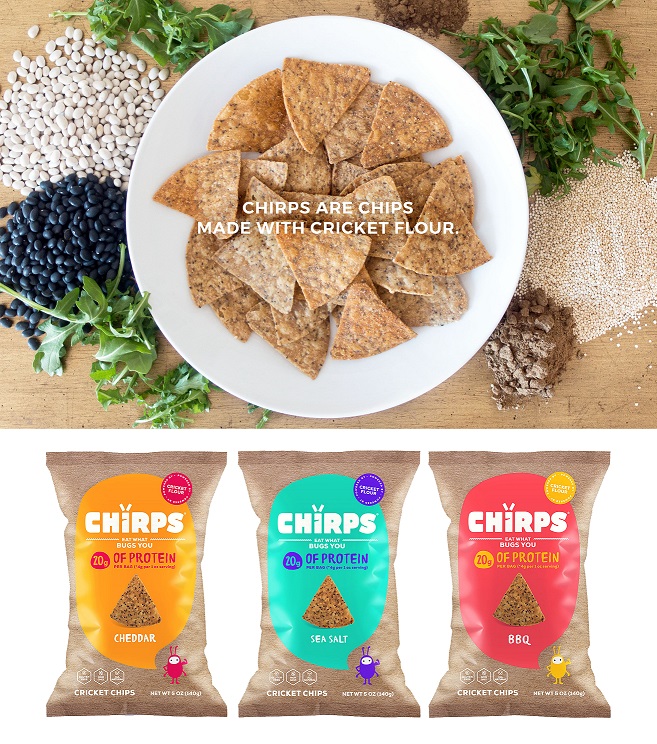 A product of the MassChallenge accelerator, Six Foods is the maker of Chirps, a cricket flour-based chip that comes in three flavors: sea salt, BBQ, and cheddar. Founded by a trio of female Harvard students, Six Foods has its eye on creating additional cricket products, with the ultimate goal being a meat-replacement protein. Co-founder Rose Wang told The New York Times that because insects contain animal proteins, it will be easier for Six Foods to mimic the taste and feel of regular meat than others in the space hoping to use plant proteins. 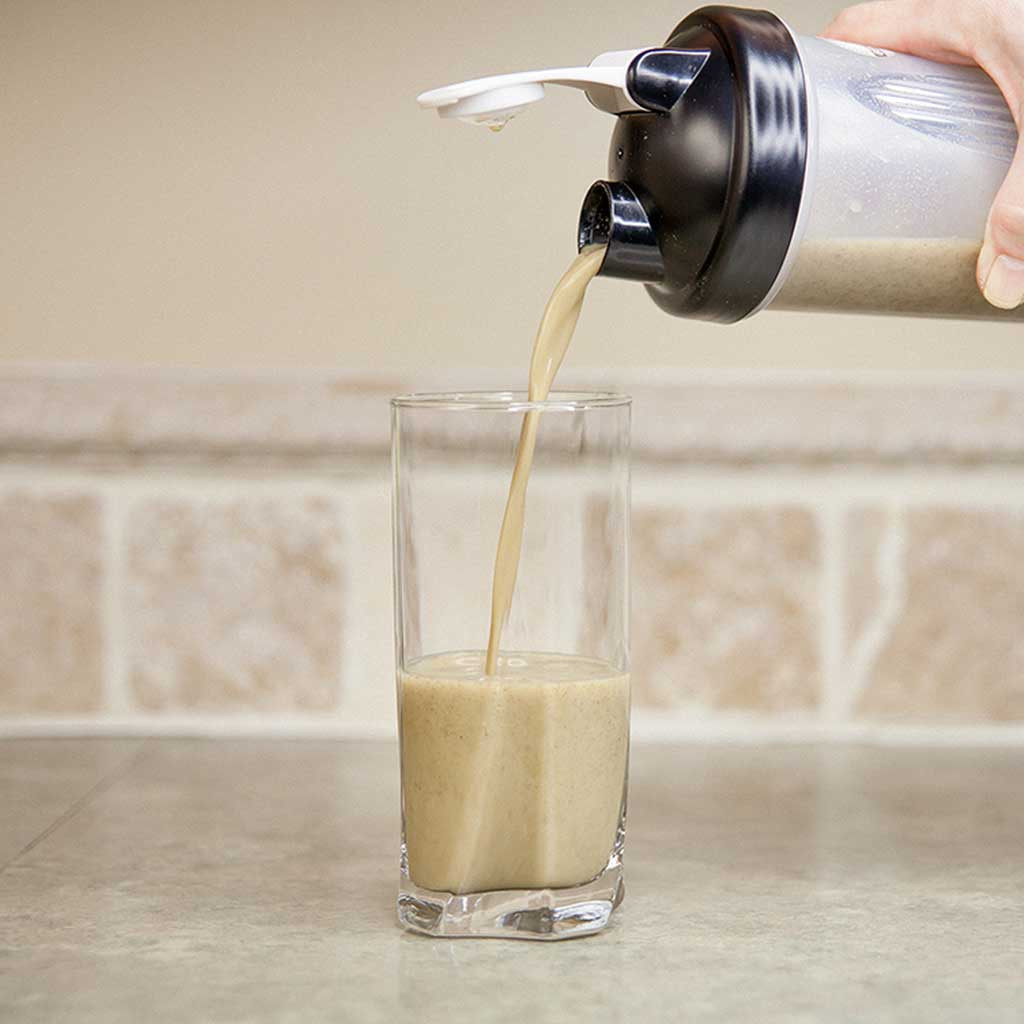 Crik Nutrition manufactures flavored protein powders out of cricket and plant materials that can be mixed with water for a post-workout shake. The Winnipeg, Canada-based company was founded in 2014 by a former telecom technician named Alex Drysdale, who told Paste Magazine that cricket products allow people to consume high-quality protein without the ethical dilemmas that come with livestock farming.  According to Drysdale, “they aren’t cramped in unnatural conditions with poor hygiene.”

Aspire Food Group is an Austin-based insect-farming company that hopes to use insect products to help feed malnourished populations around the world. Presently, the company has three farms in the United States, Ghana, and Mexico, and sells cricket flour and whole crickets on its website. Aspire’s socially-conscious mission helped it win $1 million in seed funding from Hult International Business School and the Clinton Global Initiative, and more recently, two of the company’s founders were named to the Forbes 30 Under 30 List for social entrepreneurs. 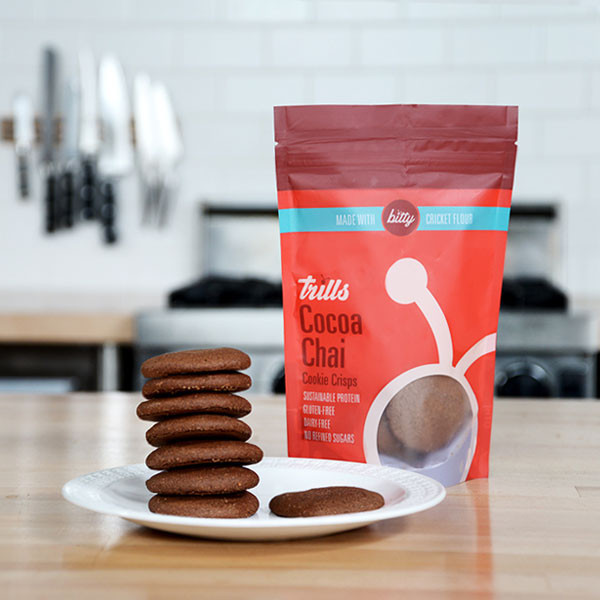 Bitty Foods is a San Francisco-based cricket snack food brand that currently sells three kinds of cookies and a flavored baking flour that mixes cricket flour, cassava flour, tapioca starch, and coconut flour. According to the company’s website, a line of air-puffed chips called Chiridos is on the way. “My vision is that we’re going to boost the protein content of all the staple foods that we eat,” cofounder Megan Miller told The New York Times. “And we’re going to need a really sustainable and plentiful protein source to do that with.”

Based in Israel, Flying SpArk is an edible-insect company hoping to sell consumers on the benefits of fruit fly larvae. The company sells dried larvae, as well as two larvae-based protein powders and a cooking oil. Like Six Foods, Flying SpArk is a graduate of the MassChallenge accelerator. “Our protein powder has no taste, but packs a lot of protein, and it can be added to any food product to instantly boost its protein level,” cofounder and CEO Eran Gronich told the Times of Israel.

The DIY entomophagy hobbyist might want to check out Livin Farms, a desktop hive for breeding and harvesting edible mealworms. The contraption comes with beetle pupae and goes for $649 on the Livin Farms website — and for an additional $40, you can get a mealworm recipe book. On top of raising more than $145,000 on Kickstarter, the company is a graduate of the SOS Ventures-backed accelerator Hax, from which it received a $20,000 investment. Livin Farms is based in Austria and Hong Kong. 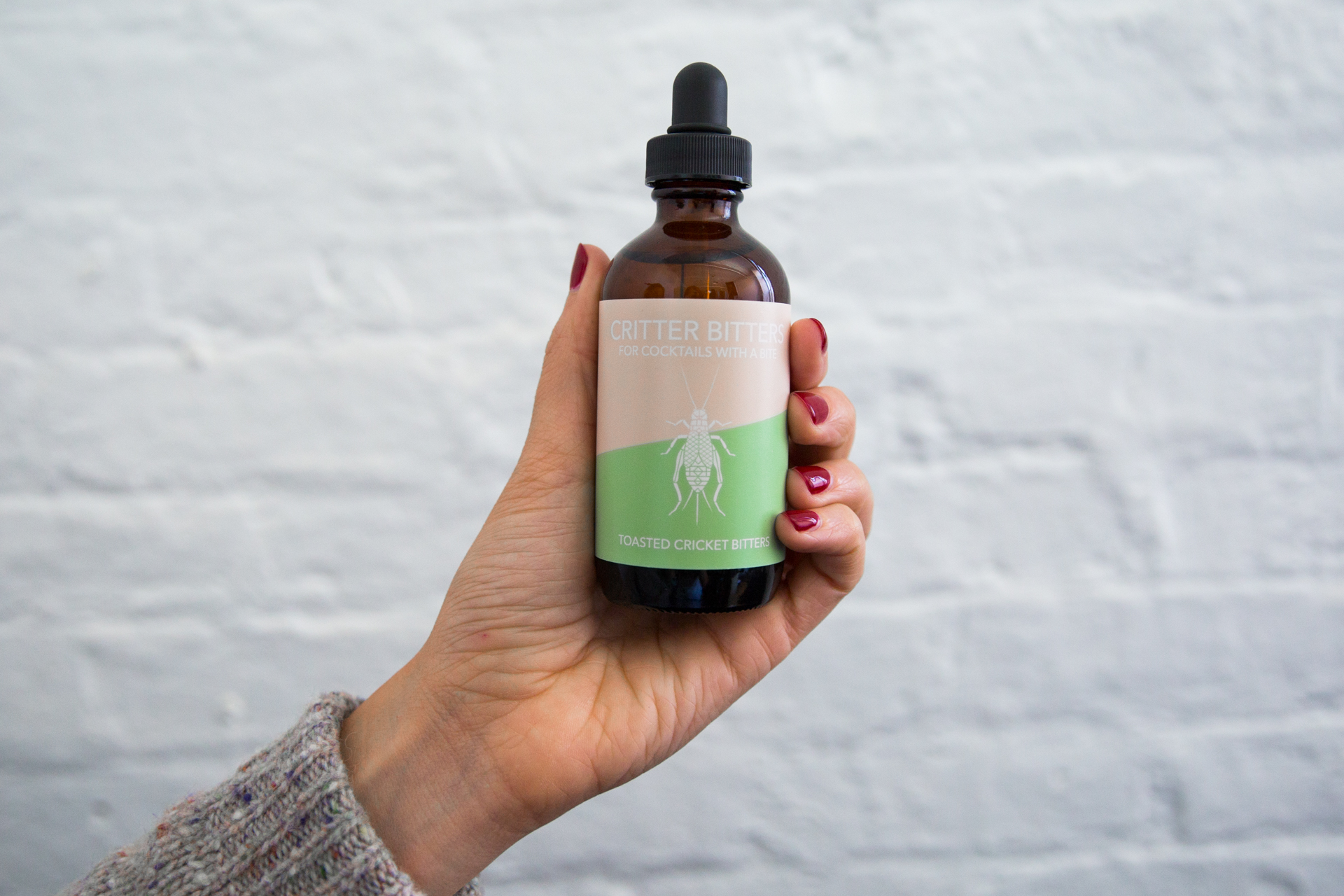 Critter Bitters was created by a pair of New York City designers who believe insect-eating could put a dent in world hunger, if only people could get over being grossed out by the thought of eating bugs. The company’s solution? Cocktail bitters made from toasted crickets. “We wanted to introduce eating insects to NYC in a way that fit into our culture — there’s a booming cocktail culture here and people are more willing to try new things when it’s in a cocktail,” cofounder Julia Plevin told Mashable. The company recently raised more than $25,000 on Kickstarter.