Research Brief
1600
Founders Fund, Benchmark and Digital Sky Technologies stand out among the investors in the $10 billion club.

You know what’s cooler than a billion dollar valuation?

Just a few months ago, there were four venture-backed companies valued at $10 billion or more. Now, there are eight – AirBnB, Dropbox, Flipkart, Palantir, Snapchat, SpaceX, Xiaomi and Uber.

Together, these companies have raised over $10.84B in aggregate funding and are backed by a number of well known and deep-pocketed investors including hedge funds, mutual funds and strategic investors.

And so given the rise of the $10B club, we used the CB Insights Business Social Graph to visualize the universe of investors in this rarefied group. Of note, 23 investors have invested in two of the eight companies. These include venture firms such as Kleiner Perkins Caufield & Byers, General Catalyst Partners and Institutional Venture Partners . Four investors including Benchmark Capital and Founders Fund have been able to invest in three while one, Yuri Milner’s Digital Sky Technologies, has invested in four. 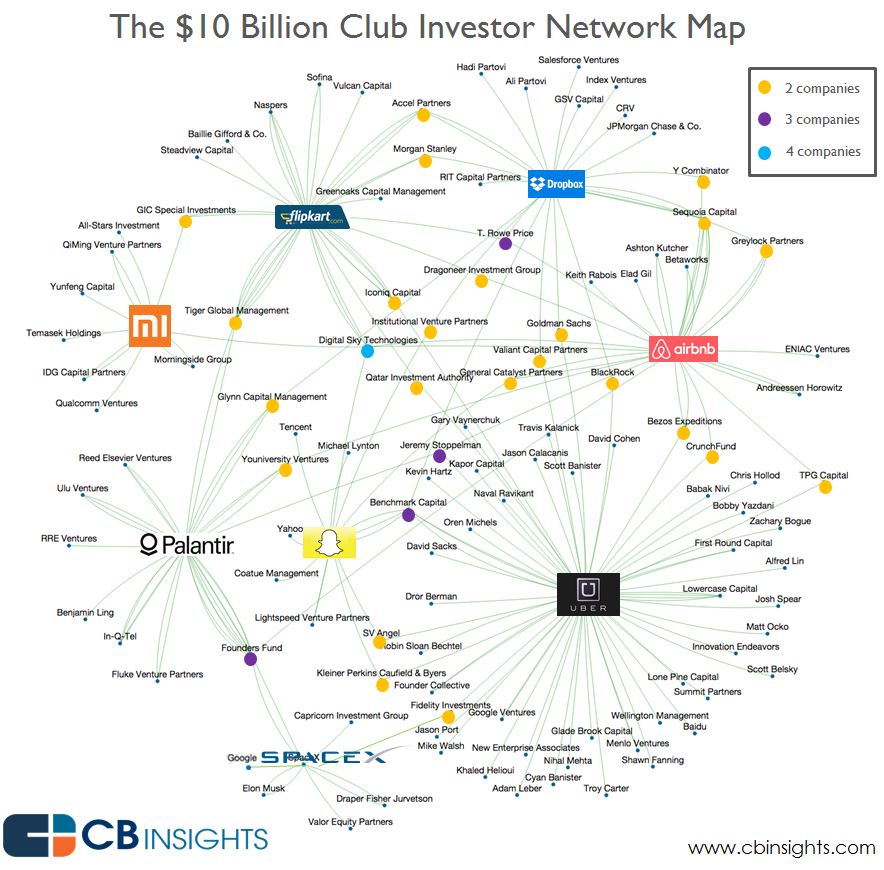 Of course, it’s worth noting that although Digital Sky Technologies has invested in the highest number of $10B club companies, its investments all came post-traction, i.e. at later stages. Conversely, Benchmark first invested in the Series A of both Snapchat and Uber (See ‘In the $10B Club, Benchmark Stands Out‘) and Founders Fund was the first institutional money into both Palantir and SpaceX.

The table below helps break this down, highlighting institutional investors in three or more $10B+ companies by their stage of first investment. Yelp CEO and angel investor Jeremy Stoppelman has impressively invested in Palantir, Uber and AirBnB.