Upright Technologies develops posture & back health training solutions through the creation of a smart biofeedback-based posture trainer that provides posture progress, stats, and trends in real-time.On January 27th, 2021, Upright Technologies was acquired by DarioHealth. The terms of the transaction were not disclosed.

Oct 19, 2021 10:00am Dario Move works with the disease management company's other B2B digital offerings to monitor chronic conditions and drive behavior change. The product launch comes nine months after DarioHealth's acquisition of Upright Technologies. (DarioHealth) BOSTON—As promised back in January , digital chronic condition management company DarioHealth has launched its entry into the musculoskeletal (MSK) health space. The new offering, called Dario Move, is a virtual physical therapy program intended to help users manage their non-acute MSK pain, DarioHealth Marketing Director Mary Mooney told Fierce Healthcare at HLTH 2021. Users wear a single sensor that tracks their adherence to exercise programs and offers feedback on form in real-time, she said. The company’s coaches and physical therapists are also on hand to monitor their movements, offer text-based feedback during a session and adjust their program in between sessions based on users’ progress or difficulties. Although delivered as a separate app, the digital MSK program is built on DarioHealth’s broader platform and interacts with its other metabolic health and behavioral health offerings, Mooney said. Either individually or collectively, the platform uses sensor or user-inputted data to assess their condition, predicts when they may benefit from automated or human interventions and delivers relevant behavior change content. Mooney and Erez Raphael, DarioHealth’s CEO and president, stressed that this interconnected strategy allows the company to differentiate its MSK program and platform from other digital disease management players who have been active in the MSK space. “The majority of people with chronic pain have other chronic conditions. Rather than yet another siloed point solution for pain, Dario delivers an integrated, dynamically personalized whole-health experience across chronic conditions,” Raphael told Fierce Healthcare. “Using a single wearable sensor, Dario Move participants experience combined exercise therapy and posture training in a physical therapist supervised member journey that drives engagement, retention and improved clinical outcomes in an easy-to-use solution.” Dario Move is currently available to B2B customers and can be purchased individually or alongside the company’s other digital programs. The launch represents the fruition of DarioHealth’s $31 million acquisition of Upright Technologies at the top of the year. At the time, Raphael and the company highlighted MSK comorbidity frequently found among diabetes and hypertension patients—populations that DarioHealth was already serving at the time—as well as the high costs employers and payers incur due to MSK issues. At the time of the acquisition, Upright had 90,000 active users and was recommended by more than 500 clinics, Raphael said at the time. Still, this week’s launch wasn’t the first move DarioHealth has made into the MSK space. In June the company launched the Upright GO S , a wearable pendant sensor that tracks users’ posture and vibrates when they start to slouch. MSK health management was also mentioned as part of a contract DarioHealth announced a few weeks back with an unnamed “global” self-insured employer based in the U.S., set to launch in the first quarter of 2022. DarioHealth has been a digital health player for roughly a decade and was best known for most of that time as the maker of smartphone-connected blood glucose monitors for consumers managing their diabetes. It reported $7.6 million in 2020 revenue. In May, DarioHealth also pulled the trigger on acquiring digital behavioral health company PsyInnovations Inc. (which does business as wayForward) for $30 million. DarioHealth’s MSK ambitions place the company in competition with a slew of other digital MSK players. Most notable among these is Omada Health, which acquired Physera last year for a reported $30 million to bring virtual MSK care to its portfolio of disease management programs. 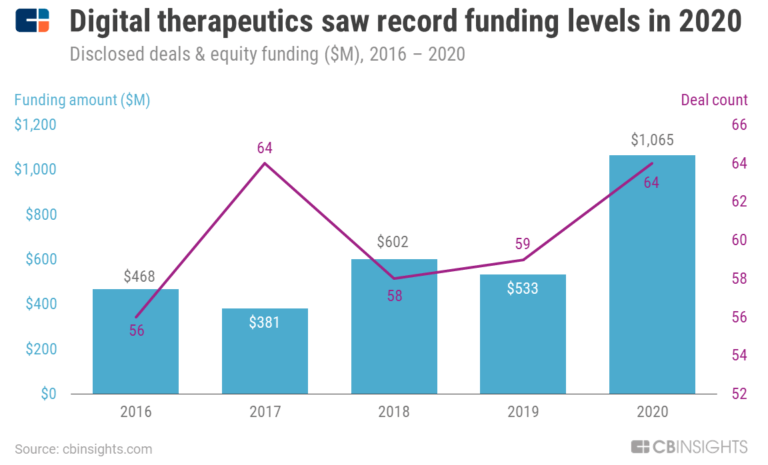 Upright Technologies is included in 6 Expert Collections, including Digital Therapeutics.