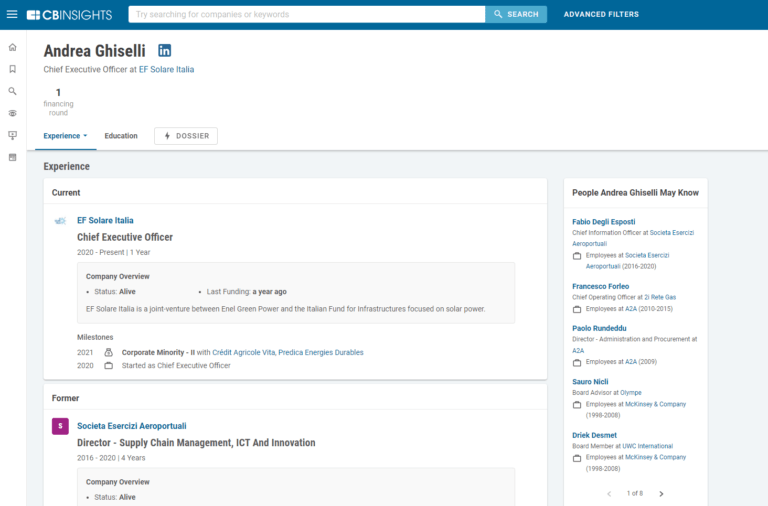 SunEdison is included in 1 Expert Collection, including Renewable Energy.

This collection contains upstream and downstream solar companies, as well as those who manufacture and sell products that are powered by solar technology.

InCharge COO Terry O’Day: Fleet Charging EVs Is About To Get Real

Description from the About/Overview section: Solaris' primary aims to provide low manufacturing cost, high efficiency and long life solar cells to capture a major portion of the projected growth of the global renewable energy market. Equity financing and Company resources are used exclusively towards this goal. However, since Solaris' NanoAntennaTM materials present a number of other large market opportunities which are validated in part by the development of high efficiency photovoltaics, the company have begun to pursue these other applications through externally funded collaborations, contracts, and agreements. These other applications of the company's nano-antenna technology and intellectual property include the enhancement of human vision, high performance liquid crystal displays, and chemical and biological sensing. Solaris Nanosciences is a subsidiary of Spectra Systems Corporation (www.spsy.com), a profitable, private company spun out of Brown University in 1996. Spectra Systems' core competence in high performance optical materials, intellectual property and physical infrastructure led to the launch of Solaris Nanosciences in May of 2004.

Isosceles is a company that received a STTR Phase I grant for a project entitled: Full Spectrum Conjugated Polymers for Highly Efficient Organic Photovoltaics. Their their award is funded under the American Recovery and Reinvestment Act of 2009 and their project will demonstrate the feasibility of forming full spectrum highly efficient polymer solar cells from newly designed conjugated and potentially variable bandgap polymers that harvest visible through infrared light. The novel materials will be forged by incorporating Silole and donor-acceptor-donor moieties into the backbone and are expected to increase light harvesting and carrier mobility, and hence short circuit current output potentially by a factor of three over the state of the art. The key innovations of this work will also optimize energy levels to reduce voltage loss and further optimization of device structure and film morphology is expected improve fill factor. The primary objective of phase I is to determine the feasibility of forging full spectrum and high carrier mobility conjugated polymers that achieve highly efficient solar conversion. An ancillary goal of this work is arrive at an understanding of photophysical processes and device physics that will lead to optimal device fabrication during phase II. The environmental, societal and economic impacts of this technology are enormously broad. The ensuing abrupt drop in energy costs stemming from full spectrum harvesting promises to deliver stability and urgently needed relief to today's volatile oil based global economy. While photovoltaic (PV) production is already the fastest growing source of energy across the globe, the planned efforts of this STTR project are expected to disruptively reduce the projected cost of photovoltaic production in 2010 by a factor of 3. At a forecasted production cost of $0.70 per Watt, this research will demonstrate a technology that is competitive with the cost of electricity that is produced from fossil fuels. This technology will provide clean and cost competitive energy for home and industrial power, vehicle propulsion, consumer electronics, remote sensing, security, and an endless list of existing applications that currently rely on energy from fossil fuel.

Solarno is a company that received a STTR Phase I grant for a project entitled: Synthesis of multifunctional nanofibrous polyaniline/carbon composites. Their their award is funded under the American Recovery and Reinvestment Act of 2009 and their project will develop novel multifunctional materials based on polyaniline (PAni) nanofibers (PANFs) and carbon nanofibers(CNFs) for energy storage. Although PAni composites have been reported for a wide range of applications, including sensors, biosensors, photoelectrochromic cells, etc., due to their excellent electrical, thermal and mechanical properties, none capitalize on the enhanced properties expected from the combination of PANF with CNF. PANFs have greater electronic conductivity than PAni nanospheres and nanorods and can be synthesized on a variety of substrates. Solarno will use a proprietary process for synthesizing composites of PANFs on CNFs. In Phase I Solarno will use these composites as electrode materials for asymmetric supercapacitors, an enabling technology that provides both high energy and power, with the specific technical objectives of: synthesizing and characterizing PANFs on CNF substrates, and achieving supercapacitor performance of 15 Wh/kg, 10 kW/kg and >10 cycles, thus far exceeding current lead acid batteries in terms of power and cycle life. In Phase II we will improve the energy density of these devices to enable potential replacement of such batteries, and explore other functions for the composites, such as sensors and electro-chemical devices. The PANF/CNF composites developed by Solarno will be introduced to the supercapacitor market via materials sales, and partnering/licensing arrangements, and later to related electrochemical functions/applications. Solarno is targeting requirements of the Hybrid Electric Vehicle (HEV) market for its initial supercapacitor designs, and as such, the ultimate customers will be major automobile manufacturers. The market requires that capacitors provide higher energy density, reduced size, higher reliability, and lower cost. Commercially available EDLCs commonly provide energy densities around 4 Wh/kg, and power densities between 15-21 kW/kg. The supercapacitor developed here can excel in this market by providing energy density > 25 Wh/kg and better reliability (>2.0 x 104 cycles); the Phase I work will optimize the properties of our PANF/CNF composite to meet this goal. The supercapacitors will also be well-suited for load-leveling for renewable energy sources; direct societal benefits will come from improving the viability of HEVs and renewable sources, tied to reductions in fossil fuel consumption, providing bridge power for wind and solar power farms, and partially replacing lead acid storage batteries. The results of this work in optimizing PAni composites for supercapacitors will translate well into improved functionality for other applications.

THINKFLEX SOLAR combines the most advantageous characteristic of the two current photovoltaic technologies. The company's modules provide the efficiency of silicon cells and the flexibility of thin film systems through the company's technology and assembly methods. The results are high power output, long lifetime and reliable modules. To simplify installation and transportation these products can be customized in size and shape. The company's products are light weight with favourable aesthetics that are easily adaptable to enhance the creation of new and green designs.