Seniorlink is a technology-enabled health services company that aims to transform care management in the home. 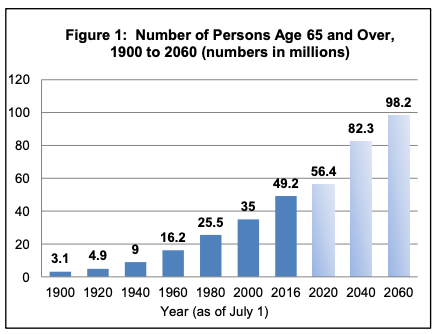 InnovAge Appoints New CEO; Axxess Beefs Up Executive Leadership Team InnovAge names new president and CEO Longtime InnovAge (Nasdaq: INNV) CEO Maureen Hewitt has stepped down from the role. Patrick Blair, formerly of Bayada Home Health Care, has been named president and CEO by InnovAge’s board of directors. The appointment comes after reports that Colorado’s Department of Health Care Policy and Financing and the U.S. Centers for Medicare and Medicaid Services (CMS) stopped reimbursing InnovAge for new clients. An audit found that clients were not receiving all of the Program of All-Inclusive Care for Elderly (PACE) required care services, the Denver Post reported . “Patrick is a proven and effective leader who has the board’s full support to lead InnovAge and to quickly address the issues that have arisen with CMS and our regulators in California and Colorado,” InnovAge Board Chair Andrew Cavanna said in a press release. “We are committed to restoring trust with our regulators to being the leading steward of the PACE program. We also want InnovAge’s participants to know that the Board is committed to upholding the highest standards of care.” Advertisement InnovAge is one of the largest PACE providers in the U.S. The Denver-based company has about 1,800 employees and serves seniors in Colorado, New Mexico, California, Pennsylvania, Virginia, Kentucky and Florida. PACE is a Medicare and Medicaid program that helps keep people in their communities instead of nursing homes. Oftentimes, programs are run out of community-based centers with the support of in-home care providers and their staff. Axxess adds three executives to its leadership team Axxess has made three additions to its executive leadership team. Advertisement “As we continue to build our global capabilities to support our clients, our executive team is taking on even greater responsibilities to ensure we have the partnerships and solutions to meet industry needs even beyond what they have thought possible,” John Olajide, founder and CEO of Axxess, said in a press statement. Dallas-based Axxess is a home health technology company that provides agencies with cloud-based software solutions. The company named Christopher Taylor senior vice president of channel partnerships, a newly created role. Axxess also named Shradha Aiyer vice president of product development. In her new role, she will be responsible for the strategic direction and development of the company’s software solutions. Additionally, Greg Orleans has been appointed as the vice president of engineering. naviHealth appoints new CEO naviHealth has named Harrison Frist its CEO. Prior to his appointment, Frist served as the company’s chief operating officer. “naviHealth has a rich history built around a dedication to patient-centered care, and I am honored to have been with the company since its earliest days,” Frist said in a statement. “I look forward to collaborating with our team and our colleagues at Optum as we enter a new phase of care delivery, explore new growth opportunities and seek new ways to achieve our mission of helping seniors live more fulfilling lives.” Brentwood, Tennessee-based naviHealth is a post-acute care management and care transitions company, otherwise known as a convener . Frist takes the helm of naviHealth from the company’s founding CEO Clay Richards. Last year, Richards announced he would be stepping down to serve in a senior advisory role at UnitedHealth Group’s (NYSE: UNH) Optum, which acquired naviHealth in 2020. Aside from his tenure as COO, Frist previously served in a number of roles within the company. He first joined the team in 2012. Seniorlink announces CEO succession Seniorlink, a tech-enabled care management company, has named its president and chief operating officer Matt Marek its new CEO. Marek succeeds Thomas Riley, who will become the company’s chairman of the board of directors. Prior to joining Seniorlink, Marek served as president and CEO of Further, a St. Paul, Minnesota-based health care spending account (HSA) administrator. As CEO of Seniorlink, Marek will be responsible for overseeing the expansion of partnerships with state governments and health plans across the U.S. Family caregivers will remain a focus in the company’s plans moving forward. “Family caregivers are committed to providing the highest quality care for their loved ones,” Marek said in a press release. “They are the foundation of our health care system, and they are at the heart of every model of care we build at Seniorlink. I am honored to have this opportunity to lead a company that not only values the role of the family caregiver but finds innovative ways to uplift and support them with solutions that will ultimately lead to better outcomes for members, caregivers and payers alike.” Jewish HomeLife names new CEO Jewish HomeLife has named its current chief operating officer, Jeffrey Gopen, its new president and CEO. His appointment is effective April 2022. Atlanta-based Jewish HomeLife is a senior care provider that operates home-based care agencies and residential communities. Gopen succeeds Harley Tabak, who will stay on as CEO Emeritus through the end of 2022. “Jewish HomeLife will go from strength to strength – from Harley’s two decades of leadership to Jeffrey Gopen who was recruited to Jewish HomeLife in a national search as part of our long-term succession planning more than five years ago,” Jeff Berman, chair of Jewish HomeLife’s board of directors, said in a press release. Additionally, Neelam Rahatekar, Jewish HomeLife’s current chief financial officer, will eventually step into the role of COO. Share

Wellthy is a caregiving support service for families with complex, chronic, and ongoing care needs. Wellthy connects families with a dedicated Care Coordinator to help tackle the logistical and administrative tasks of caring for the ones they love, including themselves.

ianacare provides a gateway to all non-clinical layers of home care guidance and caregiving support.