Share Texas A&M researchers have mined location-based data to essential establishments during Hurricane Harvey to develop a framework for monitoring communities’ resilience By analyzing peoples’ visitation patterns to essential establishments like pharmacies, religious centers and grocery stores during Hurricane Harvey, researchers at Texas A&M University have developed a framework to assess the recovery of communities after natural disasters in near real time. They said the information gleaned from their analysis would help federal agencies allocate resources equitably among communities ailing from a disaster. “Neighboring communities can be impacted very differently after a natural catastrophic event,” said Dr. Ali Mostafavi, associate professor in the Zachry Department of Civil and Environmental Engineering and director of the Urban Resilience.AI Lab. “And so, we need to identify which areas can recover faster than others and which areas are impacted more than others so that we can allocate more resources to areas that need them more.” The researchers have reported their findings in Interface, a publication of The Royal Society, a scientific academy. The metric that is conventionally used to quantify how communities bounce back from nature-caused setbacks is called resilience and is defined as the ability of a community to return to its pre-disaster state. And so, to measure resilience, factors like the accessibility and distribution of resources, connection between residents within a community and the level of community preparedness for an unforeseen disaster are critical. The standard way of obtaining data needed to estimate resilience is through surveys. The questions considered, among many others, are how and to what extent businesses or households were affected by the natural disaster and the stage of recovery. However, Mostafavi said these survey-based methods, although extremely useful, take a long time to conduct, with the results of the survey becoming available many months after the disaster. “For federal agencies allocating funds, recovery information is actually needed in a faster and more near real-time fashion for communities that are trailing in the recovery process,” said Mostafavi. “The solution, we thought, was to look for emerging sources of data other than surveys that could provide more granular insights into community recovery at a scale not previously investigated.” Mostafavi and his collaborators turned to community-level big data, particularly the information collected by companies that keep track of visits to locations within a perimeter from anonymized cell phone data. In particular, the researchers partnered with a company called SafeGraph to obtain location data for the people in Harris County, Texas, around the time of Hurricane Harvey. As a first step, they determined “points of interest” corresponding to the locations of establishments, like hospitals, gas stations and stores, that might experience a change in visitor traffic due to the hurricane. Next, the researchers mined the big data and obtained the number of visits to each point of interest before and during the hurricane. For different communities in Harris County, they calculated the time taken for the visits to return to the pre-disaster level and the general resilience, that is, the combined resilience of each point of interest based on the percent change in the number of visits due to the hurricane. Their analysis revealed that communities that had low resilience also experienced more flooding. However, their results also showed that the level of impact did not necessarily correlate with recovery. “It’s intuitive to assume, for example, that businesses impacted more will have slower recovery, which actually wasn’t the case,” said Mostafavi. “There were places where visits dropped significantly, but they recovered fast. But then others that were impacted less but took longer to recover, which indicated the importance of both time and general resilience in evaluating a community’s recovery.” The researchers also noted that another important finding was that the areas that are in close proximity to those that had flooding are also impacted, suggesting that the spatial reach of flooding goes beyond flooded areas. “Although we focused on Hurricane Harvey for this study, our framework is applicable for any other natural disaster as well,” said Mostafavi. “But as a next step, we’d like to create an intelligent dashboard that would display the rate of recovery and impacts in different areas in near real time and also predict the likelihood of future access disruption and recovery patterns after a heavy downpour.” ### Other contributors to the research include Cristian Podesta, Natalie Coleman, Amir Esmalian and Dr. Faxi Yuan from the civil and environmental engineering department. Podesta, an undergraduate student, is the lead author in this study. Coleman is a National Science Foundation graduate fellow. This research is funded by a National Science Foundation’s Faculty Early Career Development Award. Media Contact

CB Insights Intelligence Analysts have mentioned SafeGraph in 2 CB Insights research briefs, most recently on May 27, 2021. 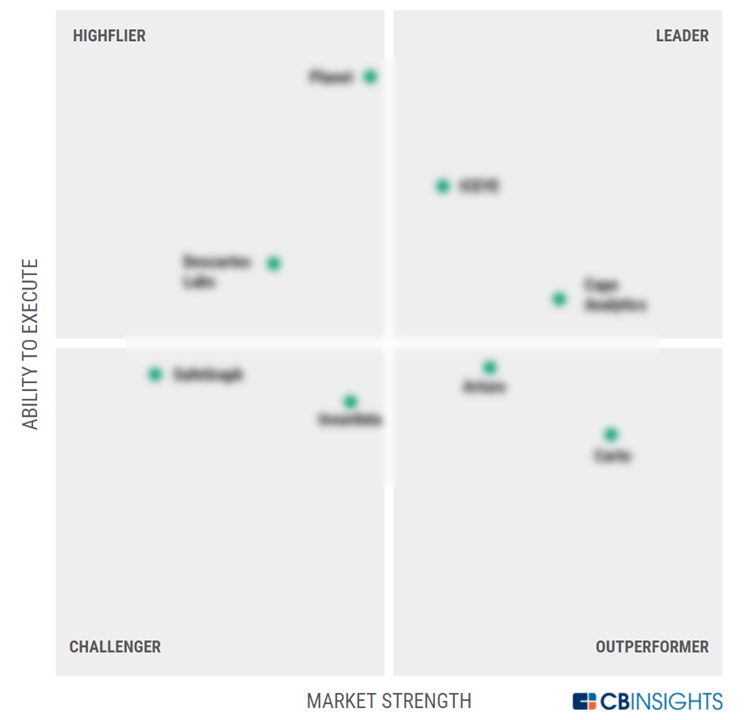