Princeton Lightwave applies knowledge of indium phosphide-based optical semiconductor devices, such as high power lasers and avalanche photodetectors, to design and manufacture optical modules and systems for emerging applications. Its customers are involved in the fields of optical networking, industrial processing, aerospace and defense, and bio-medical instrumentation.

Will Argo's new LiDAR sensor be a gamechanger? Argo AI, the US-based self-driving vehicle developer has revealed a new self-designed LiDAR sensor. The sensor should give Argo's autonomous vehicles (AVs) an edge over the competition and enable them to see further and with more accuracy than ever before. LiDAR stands for light detection and ranging, and is a common sensor type used in autonomous vehicles to detect the outside world. It works by firing a focused beam of light and waiting to see if any of the light is reflected, indicating the presence of an object. By timing how long it takes for the light to return to the sensor, it can determine the distance to the object. Combining multiple light beams firing in a number of different directions enables a self-driving vehicle to piece together a composite digital image of its surroundings. LiDAR promises a number of benefits including quick and accurate detection and ranging of objects, a long operating range, and especially good performance in poor weather and low light conditions where other sensor types can struggle. However, LiDAR is expensive and difficult to integrate into existing vehicle designs in an aesthetically pleasing way. LiDAR is also slightly controversial among AV developers due to the stance taken by Tesla's bullish CEO Elon Musk, who has been unusually scathing in his assessment of LiDAR sensors, calling them a "fool's errand". Tesla is notable for basing its Full Self Driving and Autopilot semi-autonomous systems almost exclusively on traditional video cameras and image processing algorithms. The company says it can extract all the information needed to drive safely from just these cameras, while rival developers contend that LiDAR is necessary to make up for the shortcomings of cameras, especially in bad weather. There are currently two main types of LiDAR sensor – mechanical sensors and solid-state sensors. Mechanical sensors are the bulky 'top hat' style sensors that sit on the roofs of self-driving cars and spin rapidly. The spinning deliberately fires the LiDAR sensor in a circular pattern and helps the car build up a 3D picture of its surroundings. These sensors typically cost tens of thousands of dollars and are too expensive and bulky to be fitted to private vehicles, but are commonly employed on AV development vehicles due to their significantly greater detection accuracy. Solid-state LiDAR sensors are an emerging technology that fires the LiDAR beam in one direction – for example, a front-facing LiDAR to look down the road for upcoming obstacles. This variety does not offer the kind of detail available from a mechanical LiDAR sensor, but is far smaller and cheaper, making it much more appropriate for fitment to future self-driving vehicles. For now, Argo's latest LiDAR sensor is the mechanical variety, meaning you won't see it on a production car any time soon, but it should enable its autonomous test vehicles to tackle more environments in the future. The LiDAR's range has been stretched to 400 metres, which is around 100 metres further than close competitors. In addition, resolution at this distance has been improved, all of which means Argo's vehicles can now travel safely on the highway at around 65mph thanks to being able to see objects further down the road. The fact it can operate at highway speeds opens up the technology to the commercial vehicle and logistics industry, which is more able to absorb the high costs of introducing autonomous vehicle technology in pursuit of greater profitability through reduced downtime. Argo also says that its new sensor makes up for a previous shortcoming in LiDAR sensors. Older models were known to get confused by black and dark-coloured vehicles because they don't bounce as much light back to the sensor. Now, Argo's unit can detect as little as a single photon of light returning to the sensor, enabling it to clearly see dark cars at range. This development can be attributed to Argo's purchase of sensor startup Princeton Lightwave back in 2017. The decision by Argo AI to develop its own sensor using technology acquired from Princeton Lightwave has led Ford, which owns 40% of Argo, to alter its own LiDAR strategy. It had initially invested $75 million in competing sensor maker Velodyne in 2016 but, with Argo's decision to develop its own sensor, Ford opted to sell its stake in Velodyne for a profit earlier this year. Argo is also 40% owned by Volkswagen so it's possible that the new sensor could make its way into VW autonomous vehicles at some point in the future. P.S: If you liked this article, you might enjoy the just-auto newsletter. Receive our latest content delivered right to your inbox. 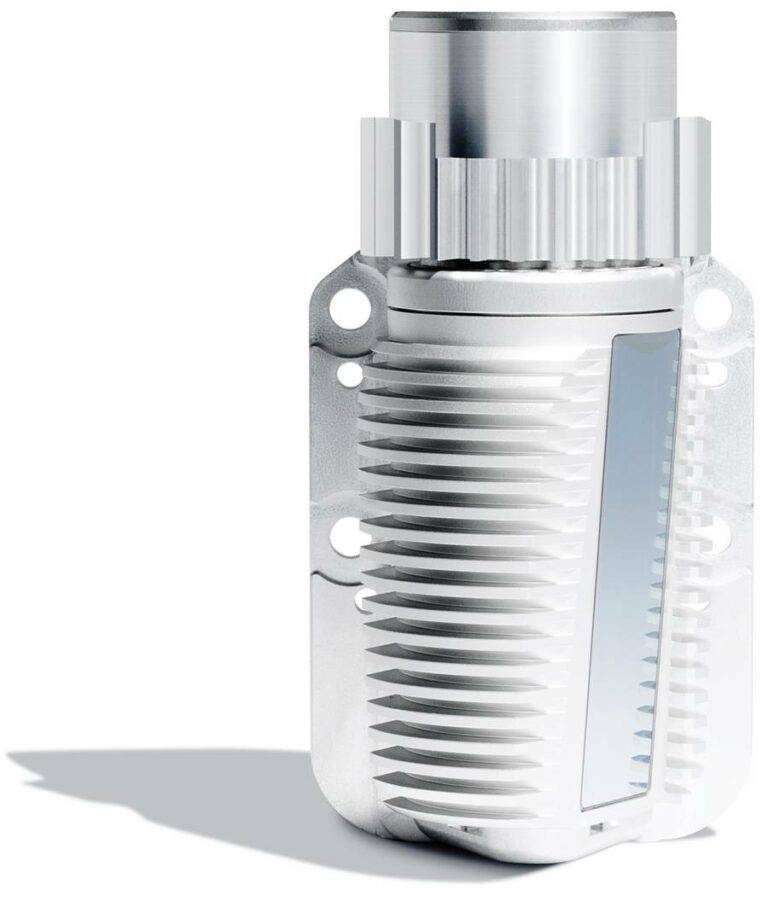