Onavo is a mobile application that compresses data usage from other applications, allowing users to maximize data plans. The company's service is a cross-platform mobile application which runs in the background, monitoring the data usage on a users' mobile device. When a phone's data connection is used, the app steps in to route the data in a compressed format through its own cloud servers, before the data reaches the carrier.

FTC: Facebook was bad at business, so it “illegally bought or buried” competition

FTC chair Lina Khan cast deciding vote in decision to refile. Enlarge / Facebook, Instagram, and WhatsApp are the three largest parts of Facebook's sprawling empire... for now. The Federal Trade Commission has refiled its lawsuit against Facebook and has included additional data that it hopes will bolster its case. The refiling is a response to the FTC’s initial case, which was thrown out in June by US District Judge James Boasberg, who did not think the agency provided sufficient data or a sharp enough definition of Facebook’s market in its first filing. Judge Boasberg also dismissed a similar lawsuit against Facebook brought by 40 states on similar grounds. “No other personal social networking provider in the United States remotely approaches Facebook’s scale,” the FTC said in its lawsuit. The new filing is an attempt to refine the FTC's previous argument, which is that Facebook squelched competition through unfair business practices. “Facebook lacked the business acumen and technical talent to survive the transition to mobile,” Holly Vedova, acting director of the FTC’s Bureau of Competition, said in a statement. “After failing to compete with new innovators, Facebook illegally bought or buried them when their popularity became an existential threat.” Further Reading The FTC filed the original lawsuit in December under Joseph Simons, who was appointed by former President Donald Trump. Simons cast the deciding vote in the initial filing, with the two Republican commissioners voting against it. In the new filing, Lina Khan, the new FTC chair, cast the deciding vote. Facebook had petitioned Khan to recuse herself from the case because she had been critical of the company in the past, but the agency’s general counsel said that her involvement would not pose a problem. “As the case will be prosecuted before a federal judge, the appropriate constitutional due process protections will be provided to the company,” the agency said in a statement. Advertisement “Anticompetitive weapon” The case focuses on Facebook’s acquisitions of Instagram and WhatsApp and the efforts the company took to block competitors from accessing its APIs. After inviting developers onto the platform, Facebook later “retooled its API policies into an anticompetitive weapon,” the FTC says. Developers could only access Facebook’s platform and its user base if they agreed to not compete with the company or help facilitate the growth of rivals. Further Reading The company’s acquisitions also constituted anticompetitive behavior, the lawsuit says. “Facebook recognized that the transition to mobile posed an existential challenge—and that Facebook had a brief window of time to stymie emerging mobile threats,” the lawsuit says. “Failing to compete on business talent, Facebook developed a plan to maintain its dominant position by acquiring companies that could emerge as or aid competitive threats. By buying up these companies, Facebook eliminated the possibility that rivals might harness the power of the mobile Internet to challenge Facebook’s dominance.” The lawsuit says that Facebook identified acquisition targets through its 2013 purchase of Onavo, a VPN service that tracked users’ activities. Facebook execs called Onavo “really cool for identifying acquisition targets,” the lawsuit alleges. “With our acquisition of Onavo, we now have insight into the most popular apps. We should use that to also help us make strategic acquisitions,” an internal Facebook slide deck said. One of those acquisitions included WhatsApp, the FTC said in the lawsuit. 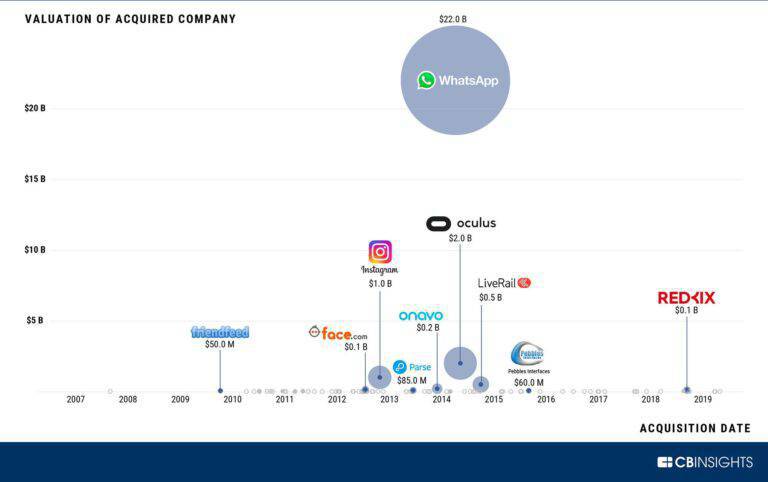